In case you missed it: Courtesy of Department of Neighborhoods 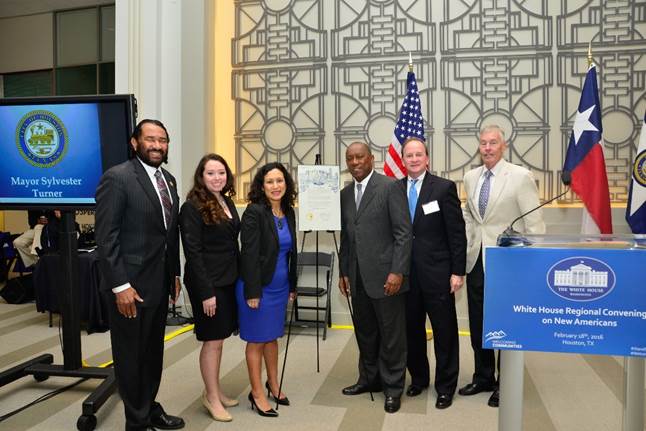 “As mayor of the most diverse city in the nation, I welcome this opportunity for Houston community stakeholders to take part in today’s White House Regional Convening on New Americans,” said Mayor Turner.  “Our focus is on how we can maximize our investment in Houston’s greatness—its people.  To excel in a twenty-first century economy in this vibrant city, where more than a quarter of the population is foreign-born, we must ensure that Houston’s social and economic opportunities remain open to all individuals and businesses.  We must build strong bridges that connect our newest Houstonians and those who have lived here all of their lives.”

The convening is the second of numerous regional gatherings scheduled to take place in cities across the nation, with the first session held in Los Angeles, leading up to the commemoration of Immigrant Heritage Month in June. The purpose of the regional convenings is to highlight immigrant integration best practices and broaden and deepen local multi-sector partnerships to advance civic, economic and linguistic integration efforts.  According to the White House Task Force on New Americans, today 4.13 million foreign-born residents live in the United States.

The regional convenings are being organized by the White House Task Force on New Americans in collaboration with local agencies, cities and counties that have joined the Building Welcoming Communities Campaign launched in September 2015.  Houston is one of 48 entities that have signed on to this campaign, which is designed to encourage communities to welcome all its residents so that the greater community can thrive.  The campaign supports President Obama’s calling on local communities to build inclusive, welcoming communities to advance civic, economic and linguistic integration.  For more information about the White House Regional Convenings on New Americans, visit www.whitehouse.gov/newamericans.

The Department of Neighborhoods served as the local host coordinator of today’s summit. The department reaches out to Houston’s international community to promote inclusiveness, cultural understanding and civic engagement. It administers the city's language access initiative to facilitate citizen access to services and resources. The department also sponsors free citizenship forums and online resources in partnership with community agencies. For more information, visit:  www.houstontx.gov/oic.