In Case You Missed It:

From the Mayor's News Releases 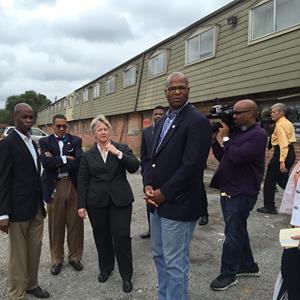 After an intensive effort that involved the mayor’s office and staff from nine City departments, 199 tenants who had been the victims of a slumlord who had ceased paying for utilities and refused to tend to other deplorable living conditions have been escapeing. For the last two years, the city has pursued various legal avenues against the owners of the Crestmont Village Apartments at 5638 Selinsky Road in southeast Houston. City records show more than 200 calls for service here.

When the conditions degraded to the point of being a public safety concern, the City intervened to get the lights back on, cleaned up the raw sewage and began working to relocate the residents.  Now that the tenants have all been moved out, the utilities are being shut off and the units are all boarded up to keep out vandals.

“No one should have to live like this,” said Mayor Annise Parker.  “We know this is not the only deplorable apartment complex which has eroded due to irresponsible ownership.  We are determined to make sure that all of our associated costs are reimbursed by the owners. The City’s response here provides a blueprint to apply to other apartment complexes which are doing a disservice to their tenants, and gives us a plan to head off a crisis before it exists.”

The project was complicated by the fact that many of the residents are on limited income, lack identification, have criminal backgrounds, bad credit or previous evictions.