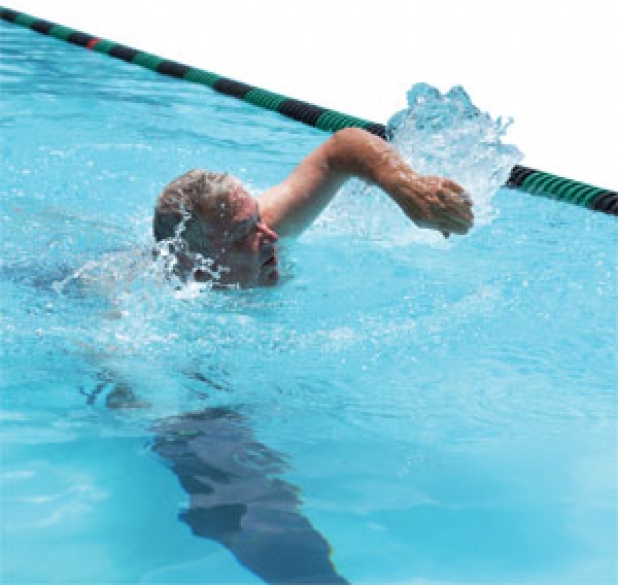 No silver bullet, but experts tout merits of staying active

Jim Coleman is among a growing legion of older people who believe that staying active physically and mentally helps ward off Alzheimer’s disease.

At 69, he splits much of his time between his job as a Public Works and Engineering Department programmer-analyst and his love of water. He swims in his neighborhood pool and scuba dives in the lakes of Texas and Oklahoma and off the Caribbean island of Roatan in Honduras.

And that’s not all.

Every morning, Coleman talks a long walk with his wife. He also plays with his grandsons, ages 1, 5 and 7, when they come with his daughter to visit from Mexico and during his trips there. And every Sunday, he goes to church and hangs out with his friends from a men’s group.

“Being active is really an important thing to do. You can’t just be a couch potato,” he said. “My stepfather died after suffering from Alzheimer’s, and now my mother also has it and lives in a nursing home. I think being physically and mentally fit keeps me from getting the disease.”

Press, whose mother died from dementia and an eating disorder 11 months ago, said her father, 82, consciously leads an active lifestyle.

“He works out in a gym, uses a treadmill and walks many miles a day,” she said. “He once weighed a lot and now is trim and healthy.”

Alzheimer’s disease is a brain disorder that leads to memory, thinking, language and behavior problems. It is one of the numerous types of, and the most common cause for, dementia, which is a group of symptoms indicating a loss of mental ability so severe that it disrupts daily life.

The belief that staying active lessens the chance of getting Alzheimer’s disease was bolstered by a study conducted by researchers at Rush University Medical Center in Chicago and released in April.

In the study, 716 people, average age 82, wore a movement-measuring device for up to 10 days to determine their normal level of daily physical activity before being monitored for several years by researchers for Alzheimer’s and cognitive decline. Researchers found that a higher level of daily physical activity – not just exercise but other activities such as card game, housework and social interaction – is linked to a reduced risk of Alzheimer’s.

During nearly four years of follow-up, 71 participants developed Alzheimer’s disease. Those who were in the bottom 10 percent of daily physical activity were more than twice as likely to develop the disease as those in the highest 10 percent.

The virtue of physical activity was also touted by researchers at the University of California, San Francisco, in their study released last July. They looked at the number of Alzheimer’s cases attributable to physical inactivity among risk factors that also included less education, smoking, depression, midlife hypertension, diabetes and midlife obesity.

So, are these studies a clue to Alzheimer’s prevention? Experts said no.

The findings are inconclusive.

In the UC San Francisco study, experts could not scientifically prove Alzheimer’s was caused by those risk factors, so they could not guarantee that addressing the risks will keep the disease at bay. They only assumed a link between the disease and the risk factors, according to Dr. Kristine Yaffe, a lead researcher of the project.

“Nothing has been proven yet,” said Dr. Ana Catalina Macias, a geriatrician with Kelsey-Seybold.

“We haven’t found anything that says, ‘OK, if you do this, you can prevent dementia.’”

“Exercising especially in the elderly helps keep their muscles strong,” Macias said. “That helps a lot with their balance and prevents falls, which could bring a whole lot of problems. We are not talking about just traditional exercise such as running or weightlifting; it can be walking, dancing and gardening.”

At 77, city retiree Cyndy Sax has been working out for 30 years on routines including aerobics and weightlifting.

“I don’t know if exercise can delay Alzheimer’s, but it certainly can’t speed it up. I figured exercise is a good deterrent for the progress of all diseases,” she said.

“Although it hasn’t been proven that keeping the brain active will prevent Alzheimer’s, some studies have shown it helps,” she said. “There are many things you can do for brain health, such as maintaining social interaction and maybe doing puzzles or reading.”

Sax said exercising improves her physical balance and strength, while daily socializing with family, friends and the other retirees at the gym enhances her emotional fitness. Working as a contracted editor for several publications also keeps her sharp, she said.

As to the brain, Coleman is a believer in the use-it-or-lose-it theory. He hasn’t thought about retiring from a job that demands intense analytical thinking to tackle the complexity of computer systems.

But his pursuit of an active lifestyle largely stems from his concern that the disease may be hereditary, as his mother, 89, has lived in a nursing home for two decades after advanced

Scientists don’t fully understand the causes of the disease. They know it involves progressive brain cell failure – loss of connection of nerve cells and the death of the cells – but don’t know why. They believe a group of factors contributes to the disease, including age, family history and heredity.

Coleman is puzzled at his mother’s development of Alzheimer’s, pointing out the irony of her being a full-time caregiver for his stepfather.

After he died, she became an indefatigable volunteer educator on Alzheimer’s care as a support-group coach at hospitals, Coleman said.

“She couldn’t even remember that her knees were replaced after the surgeries,” he said.

Signs will get worse

Macias said signs of Alzheimer’s are gradual and subtle.

“The first things people notice are they have difficulty remembering recent events, are confused, can’t find the right words, or have difficulty reasoning or concentrating,” she said. “Or they have problems with the tasks they are familiar with. Others have problems with abstract thinking, such as balancing a checkbook or paying their bills, and maybe they get lost in familiar places.”

The symptoms will progress, with later signs including complete disorientation, increased anger and hostility, delusion or hallucination, and problems with basic tasks such as eating, bathing and dressing. Some lose bowel or bladder control, Macias said.

“Symptoms vary with each patient. We may see them progress rapidly in one patient and not in another. In some patients, it can take years before you see major changes,” she said.

Coleman said it took about a decade for his stepfather’s initial signs of forgetfulness to evolve into full-blown Alzheimer’s. He remembered a call from a neighbor about his stepfather wandering into the neighbor’s backyard patio uninvited.

When he kept forgetting his medication and risked overdosing, Coleman’s mother realized that it was time for him to get full-time professional care at a nursing home.

Nothing has been found to reverse Alzheimer’s, which is progressive and degenerative. A cure is as elusive as its prevention, scientists say.

Behavior modification, avoiding anything that can trigger sadness, and more exercise or activities are preferred to drugs.

“But we have medicines that can help control symptoms,” Macias said.

Two categories of drugs are commonly used on Alzheimer’s patients: one designed to improve memory and the other to control depression, suspicion, irritation and aggression.

“The important thing is to have realistic expectations. It’s not like, ‘I give my mom or dad the medicine, it will bring their memories back,’ ” Macias said. “But it will improve their quality of life.

“However, drugs may interfere with other medications the patient is taking, have side effects, or even increase the patient’s confusion.”

Equally important is to give caregivers short breaks to allow them time to rest, refresh and take care of their needs, Macias said.

“Caring for Alzheimer’s patients is an enormous burden. Sometimes you can get burned,” Macias said.

Coleman hopes all the discussion about Alzheimer’s treatment and care won’t ever involve him.

“I’ll do everything possible to keep from getting the disease,” he said. “I do believe staying active is a key.”