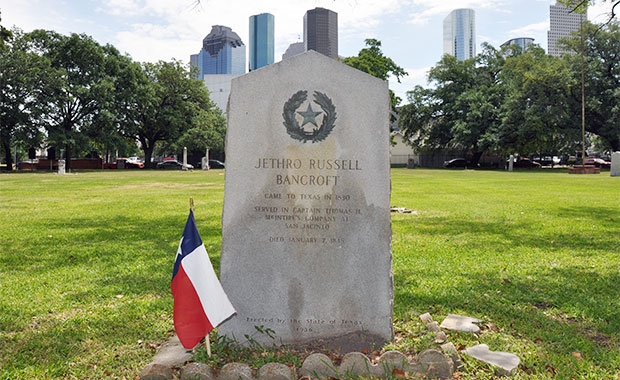 Once considered in the outskirts, Founders Memorial, Houston's first city cemetery is just outside of downtown. Photo by Paul Beckman

Houston’s downtown skyscrapers aren’t shy. Dressed in glistening glass and steel, they soak up attention by towering over everything else.

But some of the city’s biggest giants are found by looking down, not up.

Tucked just beyond the skyscrapers’ shadows is Houston’s first city cemetery, now called Founders Memorial Cemetery. And those buried there leave historical legacies that stand taller than any building. Graves of Houston's founders, first citizens and San Jacinto battle veterans occupy the tiny, quiet patch on West Dallas Street in the Fourth Ward. Once ignored and forgotten, the graveyard has recovered and now lives again.

In 1836, shortly after Texas wrestled free from Mexico to become a new republic, two brothers from New York purchased 6,642 acres along the swampy Buffalo Bayou. Augustus Chapman Allen and John Kirby Allen had the idea of creating a city that would be called Houston, in honor of Sam Houston, Texas general and the republic's soon-to-be first president.

The city's rise was bolstered when it temporarily became the capital of Texas in 1837, a move the Allen brothers lobbied for. But the arrival of people also meant dealing with the dearly departed. So the first city cemetery was established the same year.

"As was done then, it was established outside the city limits," historian Betty Chapman said. "It's just outside of what is downtown Houston today. But at that time it was way out."

John Kirby Allen was buried there in 1838, only a couple years after literally putting Houston on the map.

"Unfortunately he did not live long because we had a terrible yellow fever epidemic," Chapman said.

His mother, Sally Chapman Allen, and another brother, Harvey Allen, are also buried there. Houston co-founder Augustus Chapman Allen is buried in his native New York. Because of the Allens’ role in getting Houston started, the cemetery was renamed Founders Memorial Cemetery 100 years after it was established.

Several veterans of the battle of San Jacinto are buried in Founders. This was the decisive battle that won Texas independence from Mexico. Only nine Texian soldiers were killed. The rest went on to live their lives. For some, Founders became their final resting place.

“Many, many veterans of the San Jacinto battle are there,” Chapman said. “I’m not sure we know how many, because all the graves are not marked. Then there are some families. It was not just for well-known people or just for veterans.”

As Houston grew, so did the number of cemeteries. Although some burials at the Founders Memorial were performed into the early 20th century, most occurred much earlier. As the cemetery’s prominence waned, so did a willingness to maintain it.

"It filled up for one thing," Chapman explained. "There was no longer space to bury anyone there and it was pretty much forgotten. Sometimes it did look rather untended. And as will happen with cemeteries, markers get damaged."

Jill Brooks, a member of the Daughters of the American Revolution’s Alexander Love Chapter, said the years of neglect took its toll on the cemetery.

“Cattle used to graze on it,” Brooks said. “Goats grazed on it. That went on for decades.”

The cemetery’s decline continued until 1928, when Congregation Beth Israel stepped in. It owned the well-tended adjacent cemetery. As Texas’ oldest Jewish cemetery, it was also historic and needed expansion. So the congregation purchased the shabby cemetery from the city.

“They became concerned that they were neighbors of this piece of land that just looked really very deteriorated,” Chapman said. “They decided that if they could buy the land, they could reinter the bodies to private cemeteries. When the Beth Israel trusties realized the historical significance of the cemetery, they gave the deed back to the city, but insisted they clean it up."

The Texas centennial celebration in 1936 provided the perfect opportunity to bring the cemetery back from the dead. Even though the main celebration was in Dallas, a San Jacinto association was formed in Houston that tamed and revitalized the cemetery.

“The association cleaned up the city cemetery, put in markers for many of the San Jacinto veterans that could be identified,” Chapman said. “They really changed the appearance.”

During the celebration, the state of Texas erected monuments commemorating the contributions and service of 26 people buried there. Because the locations of individual graves within the cemetery are largely unknown, the memorial markers were put in random spots.

Now the Parks and Recreation Department maintains the property and organizations like the Daughters of the Revolution and the Texas Historical Commission continue to improve and preserve the site, conduct research and educate the public.

The DAR gives tours, picks up litter, puts flags on the markers during special days and even learned the tricks to cleaning the markers without damaging them, Brooks said. The Alexander Love chapter is reasearching aspects of the people buried there and the symbolism on the headstones.

The cemetery may have had some bleak years, but the future looks brighter. Brooks said DAR is raising money to write a grant to get a master plan completed by a historical landscape architect that would shed light on the 1936 layout. Benches and a water fountain may be added to encourage the public to use the cemetery as a passive park.

“We have this little jewel nestled in the Fourth Ward,” Brooks said.

Even with all the improvements, there are still large patches with no grave markers. A couple small stones marked “Unknown” indicate many of the buried are still unidentified. Spotty records and the passage of time work against ever finding out, Brooks said.

Still, Chapman and Brooks said the restoration work already completed at the cemetery and researching the occupants they do know about make all the efforts worthwhile.

After being designated as a Historic Texas Cemetery by the Texas Historical Commission in 2005, the cemetery was also named a protected landmark.

“It's where some of our very earliest citizens were buried,” Chapman said. “And they were people who had so much to do with the founding of Houston. So if you are aware of the people buried there and then know the roles they played in the history of our city, it takes on a real historical significance."