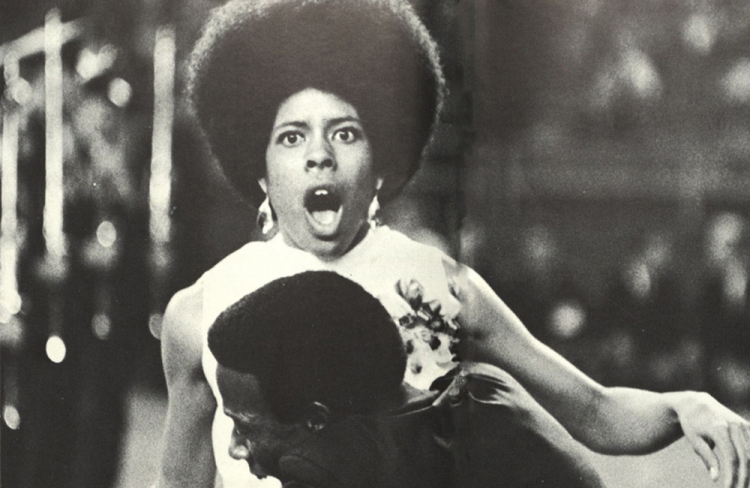 University of Houston Student Lynn Eusan reacts in total shock after learning she won the homecoming queen title, making her the first Black student to ever win at a Southern University. Photo courtesy of Lynn Eusan

The University of Houston has its share of iconic moments, but none quite as compelling as the night of November 1968 when Lynn Eusan won the title of homecoming queen, becoming the first Black student to ever wear the crown at a white southern university.

This was an important achievement for several reasons. The homecoming game itself against Tulsa saw the Houston Cougars completely embarrass the Golden Hurricanes 100-6. But 1968 was also a pivotal time during the Civil Rights Movement, as the Rev. Dr. Martin Luther King Jr. had been assassinated months earlier.

The campus was no stranger to the events occurring across the country.  Eusan’s win was a turning point on the campus for race relations. Tragically, three year later in September 1971, her shooting star was suddenly extinguished when police discovered her 22-year-old lifeless body in the backseat of a car.

“For someone to kill [Lynn Eusan] meant that our social system needed profound correction,” said former UH classmate and Houston activist Omawale Luthuli-Allen. “We have never recovered from the murder trauma, and our companion will be grief forever. But we will also keep hope alive because of her smile, embrace and optimism.”

This year marks the 50th anniversary of her death, but it also presents an opportunity for friends and classmates to reflect on Eusan’s legacy and its impact not only on the UH campus, but also the surrounding Third Ward community.

Born in Galveston County, Texas, Eusan and her family re-located to San Antonio, Texas at a young age. She arrived to UH in 1966, having graduated from a small Black high school and never been to an institution with white students.

There were many words and phrases to describe her… funny, gregarious, vocal… but one phrase that stood out was “catalytic force.” That is how Eusan’s former UH roommate and Community Artists Collective Founder Michelle Barnes described her friend.

“She had aspirations of working together with the people and helping to improve their lives by helping to put a structure in place that supported the placement of the African-American community to move into those positions and do good,” Barnes said.

“I didn’t go to UH to be a firebrand, just to get a job and support my family,” Barnes said. “Lynn invited me and made me aware of events going on in the community that I might not otherwise been engaged.”

The phrase “catalytic force” brings us to the point of this article. UH had only recently integrated the campus in early 1962, after having spent several years as a private university located in a historic Black community that it never truly bothered to connect itself with.

By 1968, there were only 1,000 Black students on campus. The decision to run for homecoming queen at the white southern university during the height of the movement was as bold a move as any could be made by a college student.

According to former classmate Gene Locke, the description, “catalytic force” was accurate.

“Very accurate. She had the ability to use her personality, wit, sincerity, and honesty to bring people together. Using those qualities collectively, she was able to get people’s attention and thinking about an agenda for social change,” said Locke, a former city attorney with the City of Houston and former Harris County Commissioner.

Locker was part of the first wave with small numbers to integrate UH and said they faced racism at university both institutionally in the way the university handled desegregation and from students and faculty.

“It was against that backdrop that Lynn, Allen and I felt we that needed to make a statement and difference to and with this university,” he said.

Eusan’s campaign put the fight for a greater democracy at the University of Houston into a greater perspective, Luthuli-Allen said. The university at that time had not made any investments into inclusiveness, highlighted by the fact that there were Black faculty, counselors, or high-level administrators at the time.

This was a situation Eusan and a group of students sought to immediately address through political protest and other activities. Thanks to their efforts, the university created the African American studies program that has since evolved into a degree granting department.

Eusan’s decision to run and become the university’s first Black homecoming queen was a strategy to galvanize Black and white students on campus. Her campaign had its challenges, especially from the established white fraternity and sororities on campus who decided to band together and nominate a candidate representing them.

Ultimately, it was her charm, gregarious personality and intelligence that was able to galvanize other students and student organizations behind her, even earning an endorsement from the student newspaper, The Daily Cougar.

“First and foremost, her campaign was an organizing tool to bring black and students of color into a more equitable and just university. Remember at this time, the university had not made an investment into inclusiveness,” Luthuli- Allen said.

Locke described the night she won the homecoming queen title as an “affirmation that we can make change if we organize and commit ourselves to making change.”

“The election that night was electrifying, satisfying and uplifting,” he explained. “The victory for Lynn was a victory for students who wanted change. It was a coalition of students of all colors and races working together to make a statement that diversity should be the norm and not the exception.”

Eusan also helped co-found the Afro-Americans for Black Liberation organization and the university’s chapter of the Alpha Kappa Alpha sorority while she was a student. After graduating, she worked at the SHAPE Community Center, writing for its newspaper and doing administrative work while continuing to serve her community.

“Lynn represented a seamless integration of the student as a problem solver and a catalyst for the minorities of this country that had little hope of escaping poverty and racial discrimination. Lynn was a bright light that represented our better angels as she sought to improve life for all, not just black people. She was an affirmation of nobility and enlightenment,” Luthuli-Allen said.

Alas, her bright light was tragically extinguished, leaving behind the age-old question, “what if?”

Ironic she died so tragically,” Barnes said. “She died in the very community she worked hard to support. If they had only known who she really was.”

Her legacy continues to live on.

“Lynn should be remembered as a pioneer, a trailblazer that joined the struggle for a more perfect union,” Luthuli-Allen said. “The struggle at the University of Houston was a component of the human and civil rights struggle that was seeking to transform the nation and live up to its lofty ideals.”

“Lynn helped to elevate the student as a change agent and not just a citizen striving for social mobility through college education,” he added.

Locke says he sees Eusan’s spirit in prominent leaders like Stacy Abrams and Vice President Kamala Harris. “You see so many Black women who have not been given the credit for their contributions to society. These are the kinds of things I’ve seen in Black women through my life,” he said.

“I think that Lynn saw the world as a place that she could make a difference. It was never about her the person; it was about what we could do to make a difference. That collective spirit is something she should be remembered for. If we work together, we can move the needle a little bit forward.”