Looking back: Unsung hero fought for equality in Galveston 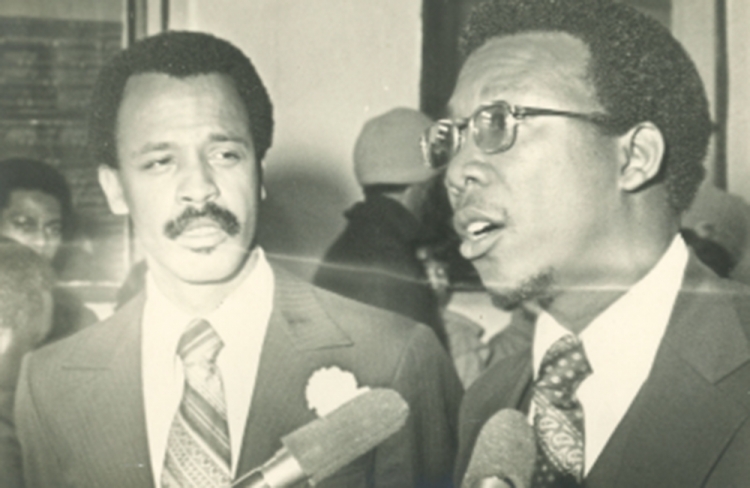 Kelton Sams, right, gave the invocation and benediction at a 1977 ceremony renaming South Park Boulevard as Martin Luther King Boulevard in honor of the civil rights icon. Sams devoted years of his life to fighting for racial equality in Texas. Photo by Zollie Scales, Jr.

How Kelton Sams sparked a civil rights movement on the island

Many people know the story of Martin Luther King Jr., the most prominent civil rights activist of the 1950s and ’60s who led a nationwide movement to end segregation. Yet, there are untold stories of people at the local level who mobilized grassroots movements against segregation.

People like Kelton Sams, who led desegregation efforts in Galveston. Sams, who retired from the city as a project manager for the General Services Department in 2008, spent years fighting for equality and supporting the civil rights movement that erupted in the 1960s.  He joined the movement when he was a junior at Galveston’s Central High School, the first Texas high school for black people.

On a cloudy day in 1960, 16-year-old Kelton Sams did something that today sounds routine, but back then was extraordinary: He sat down at a lunch counter in downtown Galveston. The Woolworth’s lunch counter, like so many others across the country at that time, was segregated and only served white people. Sams, a young black teenager, along with several of his classmates, were denied service.

“They turned out the lights and closed the lunch counter,” said Sams, of the sit-in that would spark a wave of sit-ins at lunch counters in downtown Galveston.

Sams had heard about staged sit-ins taking place across the South, with college students taking seats at segregated lunch counters to protest the segregation of public places.

“I expected we would be arrested and taken to jail,” Sams said of his initial thoughts when he began to plan the sit-in.

Instead of being arrested, the students were able to carry out their nonviolent protest. Soon, word spread about the sit-in, with the local black community rushing to downtown in support of the teens.

In groups of four, the students took turns coming in and out of Woolworth’s to eat.

“We did not want them to take the seats,” Sams said.

Over the next few weeks, Sams organized sit-ins at lunch counters throughout downtown Galveston. A month into the protests, Sams got the news he had been hoping to hear. The lunch counters had been desegregated.

“It was a tremendous win,” Sams said.

Looking back, Sams can’t quite explain what compelled him to take on such a pivotal role in a growing civil movement to protest segregation.

“It just sort of fell to me to do that,” Sams said of why he organized that first sit-in 60 years ago at Woolworth’s in Galveston. “I was not going to settle in my lifetime for less than achieving the goal of full equality.”

A month after the lunch counter sit-ins, Sams took his protests to Stewart Beach, movie theaters, and other Galveston restaurants with segregated sections for blacks and whites.

“We had been out of slavery for some 100 years, and yet we were a long way from being treated like full citizens,” Sams said.

Taking the fight to Houston

After graduating from high school, Sams went on to attend Texas Southern University.

Despite rumors of expulsion for the first three people to sign a petition to start the chapter, Sams decided to circulate it on campus.

“I signed my name five times on the petition and then people started signing. I didn’t get expelled and neither did they,” Sams said.

Sams never ceased his efforts to fight for equality, serving as TSU’s student body president, working with local churches to help register black people to vote, and getting more involved with local politics.

After graduating with a degree in economics, Sams stayed active in religious, economic and political activities in Texas. He served in various local political roles and later went on to serve as an ordained pastor of the United Church of Christ in Houston for more than 10 years. In his role for the city, he oversaw the multi-million dollar renovation projects for the Clayton Library Center for Genealogical Research and the African American Library at the Gregory School.

“I had no idea I would spend a lifetime doing this,” Sams said of his service to the community.

Sams believes the fight for equality has come a long way.

“Going from not being able to sit down at the same lunch counter with the same dollar bill the next guy was paying with, to being able to be president of the United States,” he said. “It’s very encouraging.”

“Some of it would not have happened if we had given up. Not only myself, but all of the many people who participate in the fight,” he said.