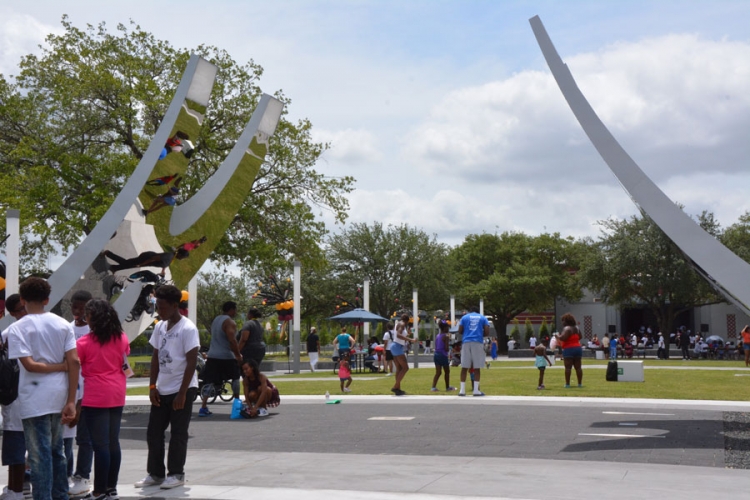 If it wasn’t time for school, church or a meal, Mike Jones said his mother could find him on the Emancipation Park basketball court.

Many of Jones’ fondest memories and some of life’s hardest lessons were learned at that park, he said. At age 60, Jones still lives in the Third Ward house where he grew up, just one block from Emancipation Park.

“I’ve been going to this park for more than 50 years. I learned to play basketball there, I made lifelong friends that I still meet up with. I stood up to my first bully there,” Jones said. “I met my first wife at the park back in the 70’s. Mostly, playing basketball kept me out of trouble and it got me a college education.” The skills he learned on the basketball court led to an athletic scholarship to Texas Lutheran University. He was drafted, but cut pre-season from the San Antonio Spurs in 1980.

Similar experiences could easily be echoed by generations of Third Ward residents. Emancipation Park may hold a sentimental value for Jones, but the park has a profound cultural significance rooted in African-American history.

Established in 1872, Emancipation Park is the oldest public park in Houston. During the decades of racial segregation, it was the only public park and swimming pool open to black residents.

Known as a the jewel of the Third Ward and social and cultural hub for the African-American community for 145 years, Emancipation Park got a chance to shine again after a three-year, $33.6 million renovation project was unveiled. The park welcomed visitors of all walks of life on June 17 for a day-long festival and rededication ceremony.

“Can you imagine the folks back then who had to the vision to purchase this property for $800, and look where we are today,” Mayor Sylvester Turner said at the ceremony. “The men and women who brought this park into being were just a few years removed from slavery, yet they knew what they wanted and they set about to build it. To Rev. Jack Yates, to Rev. Elias Dibble, Richard Brock and Richard Allen, and to their families and congregations, we say thank you and a job well done.

“So, today we stand on this hallowed ground and admire these refurbished buildings and this new construction. I think we have done the original four fathers of Emancipation Park proud,” Turner said. “But I want us to be very careful that we not reduce the significance of this park to this area, because this park is very important to this city as a whole, to this state and to our country.”

Jones missed the speeches and performers, but he welcomed and shuttled visitors between the Jordan Grove Missionary Baptist Church parking lot and park festivities. To newcomers, Jones beamed with neighborhood pride and pointed out his church, his house and his park. These days, Jones can barely recognize the park, and that’s good news, he said.

“The new park — it’s really something. We’ve got a new pool, a new gym, I’ve already played on the new basketball court,” Jones said of the $33 million renovations. “I’m going to start playing tennis. Everything is new and different, but it still feels like home.”

Renovations were designed by Philip Freelon of Perkins + Will Architects. Freelon, an African-American architect, is known for his work on the Smithsonian National Museum of African American History and Culture and the National Center for Civil Rights in Atlanta, as well as the Museum of the African Diaspora in San Francisco.

“This is more than a park, isn’t it? This is the embodiment of history, a beacon that re-establishes this place as the focal point for Houston’s Juneteenth celebration,” Freelon commented at the ceremony. “It provides a safe place for children to grow, play. It’s a community center, it has a performance center and much more. It is a destination for visitors to the city and a catalyst for continued development and the resurgence of the community.”

The project was funded through public and private sources including the OST/Almeda Redevelopment Corridors-Tax Increment Reinvestment Zone No. 7 (TIRZ#7), Texas Parks & Wildlife Department, Houston Endowment, Kinder Foundation, Timken Foundation of Canton and the City of Houston.

In recent years, luxury townhomes, new restaurants and businesses have moved into the historic neighborhood, but Turner was quick to shut down negative comments about gentrification.

“When the New York Times reporter asked me yesterday, ‘Mayor, are you concerned that with this $33 million construction, that this area will become gentrified?’ and I said, ‘In communities like this, they deserve the very, very best. And communities that have been underserved and under-resourced for decades, I think we can give them the very best, and work very hard so that we do not force people out,’” Turner said.

Over the last five decades, Jones has seen his neighborhood change for better and worse, but he happily embraces the forward momentum.

“I hope the park will bring up the land value in the neighborhood,” Jones said. “I have plans to tear down my house and build townhomes on my property.”

John Taylor attended the ceremony and enthusiastically waived two American flags throughout the speeches. He said the festivities captured the can-do American spirit, and he was proud that the park would bring new visitors to the neighborhood.

Emancipation Park visitors stroll the grounds in front of the newly redesigned gymnasium​.

One half of the polished stainless steel gateway arch is inscribed, “Liberation and Opportunity.”

One half of the polished stainless steel gateway arch is inscribed, “Creativity and Release.”

An Emancipation Park visitor takes a break to read in the shade.

Children swing on the newly redesigned playground at Emancipation Park.

A young man paints a portrait of a young woman in an Afrian-inspired head wrap.

Read more about the park from: