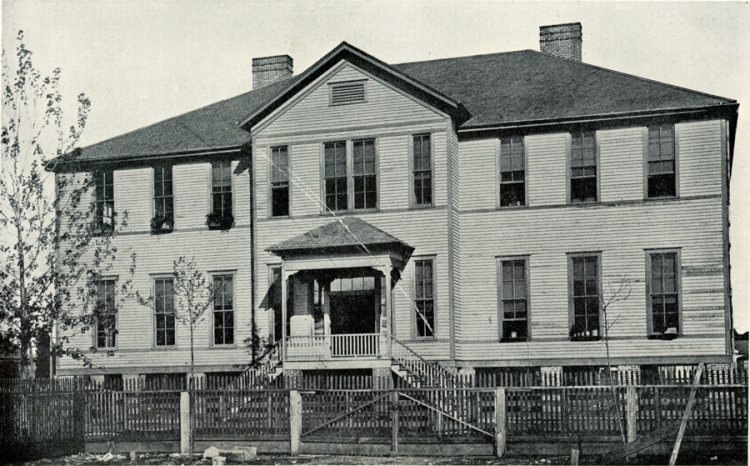 Once serving as the city’s first African American public school, the restored red-bricked building now serves as a community resource that preserves and promotes the rich history of African Americans in Houston.

“Its mission is to promote and preserve African American history and culture.”

Founded in 1870, the Gregory School, previously known as the Gregory Institute, was originally located in downtown Houston on Jefferson Street between Smith and Louisiana until a severe storm left the building beyond repair.

In 1903, the school was relocated to Victor Street in Freedman’s Town, the city’s first independent black neighborhood where freed slaves settled near the southern swampy edges of the Buffalo Bayou after the Civil War.

In 1926, construction of the existing building took place.

For three decades, the building stood vacant before being acquired by the city from the Houston Independent School District.

Through federal community development block grants and library and city of Houston construction funds, the dilapidated school was redeveloped into the first city building dedicated to African American history.

“Mayor Lee Brown looked at other institutions across the country that were doing the same thing we wanted to do,” Wilson said. “And that is to serve not only as an archive but also as special collections with exhibition space.”

“There were efforts before, but there was no building,” said Wilson of earlier attempts to create a dedicated space focused on African American heritage.

“All of the doors that you see are doors that were in the original structure,” said Wilson of the remodel of the building, which included the addition of reading rooms, permanent exhibit galleries, a special collections stacks room, a library, and an oral history recording studio.

With a focus on African American culture and history, the undertaking of collecting artifacts for the library was lead by Patricia Smith Prather, co-founder of the Texas Trailblazer Preservation Association.

“She was the historian on the project,” said Wilson. “She went into the community to raise awareness about the Gregory School and also to collect objects and items.”

“We did scanning projects throughout the city and at differing neighborhood library locations back in 2008,” Wilson said.

“We asked people to bring documents and old photographs,” she said. “We collected quite a few collections that way.”

But the library’s aspiration to document the history of African Americans in Houston is far from over.

“We’re still trying to build their story,” said Wilson of the library’s continuous efforts to preserve and collect items of cultural or historical significance through its Walk-in Wednesday Archiving Services.

“People can come in with their items, photographs or documents that they want to donate,” said Miguell Cesar, lead archivist at HPL’s African American Library at the Gregory School. “We will go over the items they have and determine their significance and historical research value.”

“If they’re ready to start a collection, we sign a donor agreement form,” he said. “If I find something that I know is of use, that’s the exciting part.”

Since opening its doors in 2009, the library has amassed nearly 500 special collections that reflect African American culture and traditions.

“African American history wasn’t documented well in the beginning,” he said. “The library is helping to fill in those gaps.”

“Finding people in Houston that contributed to something significant but were never documented or even acknowledged, we’re able to do that here,” Cesar said.

“Often times people don’t think about 50 or 100 years from now,” Wilson said of the significance of the library and it collections. “People might be gone but their legacy can still be celebrated.”

“In a sense, we are living in history,” Wilson said. “It’s like reading a book chapter by chapter, you want to know what happened then.”

“If you don’t think you know what you have, you should definitely come see the archivist,” Cesar said of residents who might have items tucked away in storage boxes.

The library has four permanent galleries that highlight African American culture and traditions, including a temporary exhibit gallery that rotates exhibits every 3 to 4 months.

The next exhibit to be showcased is Wandering Spirit: African Wax Prints, a tribute to the century-old handmade designs and patterns on textiles that originated in Indonesia and were copied and industrialized by Europeans and exported to Africa.

To learn more about the African-American Library at the Gregory School, log on to http://www.thegregoryschool.org/index.html.

The library offers archiving services to the public every Wednesday from 11 a.m. to 5 p.m.  The public is encouraged to bring items to be viewed by an archivist or discuss a possible interview with an oral historian.

Example of past donations include:

The gallery showcases a classroom restored to its original 1926 appearance.

Freedman’s town gallery in honor of the neighborhood

The gallery chronicles the establishment of the African American community in Houston after emancipation.  A variety of stories, powerful images, timelines, and artifacts make up this gallery.

The gallery honors African America Houstonians whose culture and heritage played a significant role in the development of the city into what it is today. Photographs and artifacts represent seven principles: unity, self-determination, collective work and responsibility, cooperative economics, purpose, creativity, and fait.

The gallery features new exhibitions that highlight African American history, culture, or the arts. Educational programs including lectures, films and workshops complement these exhibits. At times, some exhibitions will utilize items from the Gregory School special collections of historical items.