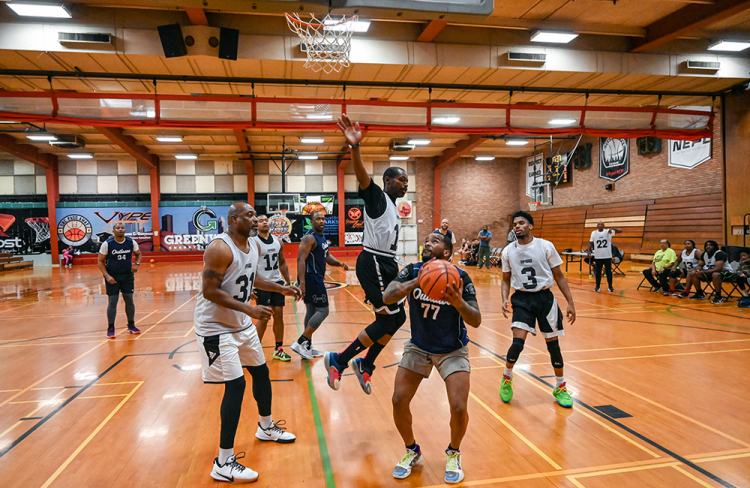 Eight department teams competed over the course of nine weeks to see which city department team would emerge as champions of the City of Houston Employee Basketball League’s inaugural season.

With their flashy names, the teams showed off their skills on the court. Participating in the inaugural season were:

By the end of week seven, the top four teams -COH Dream Team, Shot Callerz, Hot Shots and Outlaws-each earned a spot in the league playoffs Oct. 13, ending with the Outlaws and the Dream Team headed to the championship game the following week.

Photos from season one can be found here and the final league standings were as follows:

HR Communications employee Jennifer Cobb approached HR Director Jane Cheeks with an idea to create a basketball league for city employees to capitalize on the positive feedback from the tournament and to fill a void within the city.

“Basketball is one of my favorite ways to stay active. A few of my teammates worked with each other already, but for the most part we met each other for the first time at game one,” said Stevie Ray, Sharpstown WIC Nutritionist, and captain of the Hot Shots. “We organized practice after work each week and built our team chemistry.

Ray said support from the team’s family and friends helped HHD Hot Shots made it to the playoffs. “I'm fortunate to have met a variety of colleagues within my division who work at different locations, and many more within the City of Houston,” he said.

“My department had a great time and are already talking about doing more things like this. It wasn’t about the wins and losses, but more so the team building and morale boost,” he said. “Shout out to Jen and everyone else that made this league possible!”

Employee engagement and wellness were the motivation behind the creation of the COHEBL following the success of the 2022 Public Service Recognition Week basketball tournament held last spring.

"The COH league was a great way to network, meet and build relationships within the department, a lot of the time during our work we get caught up in our own work and this was an excellent way to build bonds outside of normal routine,” said Zubayr Effendi, Hot Shots. “The pandemic really highlighted how important it is to come together and work as a cohesive unit and basketball was a great catalyst to this.”

“We are ready for next year, were coming for that crown! I thank Jen, Mr. Stephen Williams and my captain and coaches for the opportunity, a BIG heartfelt thank you and shoutout to the volunteers, referees, and coordinators as well.”

“It was a pleasure to be a part of the league, my department had a great time and enjoyed getting to know some of you. We look forward to the next go around as well. Great job to Jenn and her team that assisted,” Brown said.

Cobb said the collaborative effort between HR, the Parks department and Parks’ Deputy Director Debra Lathan was essential to the start and to the success of the league. A second season has been greenlit and is scheduled to start on Thursday, Jan. 12, 2023, at Fonde Recreation Center. The championship game will be held on Thursday, March 9, at 7 p.m.

The following eight teams will be participating in January:

Kickball and softball tournaments will also be offered to city employees in calendar year 2023.

For more information, to volunteer or to join the COH sports committee, please contact Jennifer Cobb by email at jennifer.cobb@houstontx.gov.