HHD sings the praises of breastfeeding 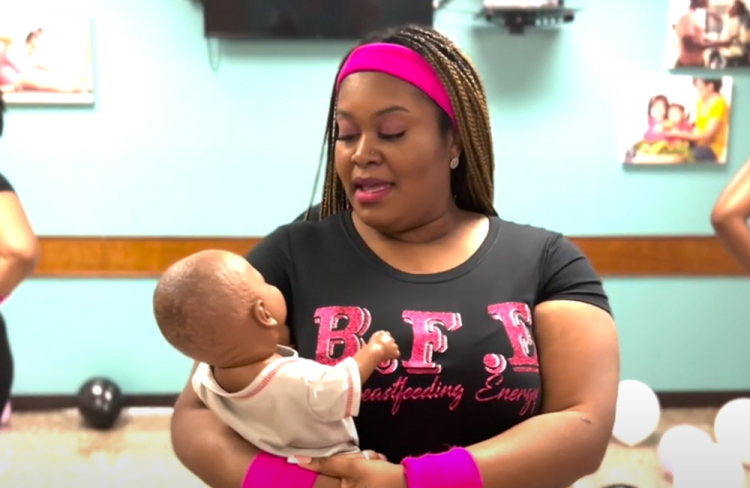 Anyone who walked into the Sunnyside WIC clinic on Cullen Boulevard. recently may have been surprised to see a group of women dressed in black and pink, dancing, singing, and rapping to Mariah Carey about the benefits of breastfeeding.

Others may have even seen a group of women wearing their finest western wear walking down a dusty road singing “Latch My Baby” to the tune of L’il Nas X’s “Old Town Road.” Or they might have done a double take upon seeing women wearing tuxedo hats telling new mommies to “Pump it Up” to the tune of Bruno Mars, “Uptown Funk.”

Whatever the scenario, they weren’t hallucinating. It was all caught on camera and played on video screens in City of Houston facilities, as well as on YouTube.

These clever and funny music videos took their inspiration from some of pop music’s biggest hits, but the underlying message was serious: Breastfeeding is often one of the most beneficial things mothers can do for their babies.

And in addition to providing an important message about breastfeeding awareness, the women of the Houston Health Department WIC program who starred in the video campaign had a blast performing.

HHD Breastfeeding Coordinator Sara Garcia said the videos were created after a talent show put on by the health department’s WIC program for the annual breastfeeding education staff in-service day.

“For all our videos, our own employees have written the lyrics, even recorded scenes from their own cell phones, edited videos, and last but not least, sang their own songs with so much positive energy,” she said.

“We are extremely proud of our WIC employees and the things they do every day to help our community be healthier,” Koopei added.

“For this video and the other two videos WIC created, ‘Latch My Baby’ and ‘Pump it Up,’ it was extremely important for us to portray breastfeeding in a fun and entertaining manner,” Garcia said. “We feel that this creates curiosity for breastfeeding and allows us to share information more effectively.”

Stewart said the team rehearsed for a couple of hours over a two-week period before recording the video. “It took multiple takes to accomplish the final product, several bloopers were included for fun,” she said.

“We were determined to create a fun and exciting video that allowed everyone to shine and showcase their personalities. We pumped each other up and fed off each other’s energy during the recording,” she added.

And no, the vocals were not lip-synched. Stewart said the team went to an actual recording studio to record the lyrics.

“Ariel Mason, myself, Taylor Laster, and Kayla Fierro are the rappers,” Stewart said.

“It was a total team effort. We had so much fun coming up with the lyrics. We most definitely are not rappers, but we let loose and brainstormed to create something that is special,” Stewart said.

“The dance moves actually came from Tik Tok, believe it or not,” she added.

“We also have on staff peer counselors who are WIC mothers themselves and who have breastfed their own children. Peer counselors and WIC nutritionists make it a priority to provide information to mothers on the benefits of breastfeeding,” she said.

Garcia also said a state law — Texas Health and Safety Code Chapter 165 — protects women’s right to breast-feed in any location where they are authorized to be.

She also said the hope is families will watch the videos and want to learn more about breastfeeding and come to WIC for more information.

“Moms need to know that breastfeeding is not an all or none, and WIC is here to help them achieve their personal breastfeeding goals. WIC has the breastfeeding energy to empower women to latch their baby or pump their milk out,” she said.

Check out these videos by the Houston Health WIC team that emphasize the positive ways breastfeeding helps infants grow.