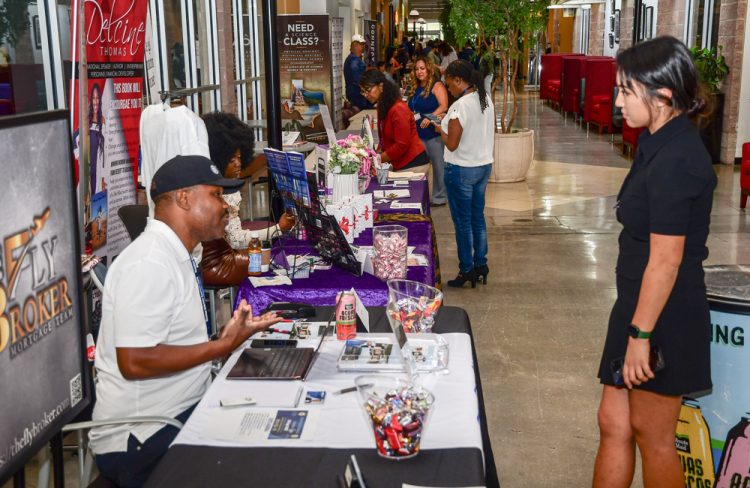 Veteran and mortgage broker Jerome “J.J.” Johnson talks to a passerby at the Houston Veterans Business Expo at the Houston Community College West Loop Campus. The event was sponsored by the Mayor’s Office of Veterans and Military Affairs and the Houston Regional Veterans Chamber of Commerce. Photo by Pete Mayes

The Mayor’s Office of Veterans and Military Affairs teamed up with the Houston Regional Veterans Chamber of Commerce to highlight veteran-owned businesses in the Greater Houston Area.

About 700 veterans attended the expo at the Houston Community College West Loop Campus. The event was the first collaboration between MOVMA and HRVCC and showcased local veteran-owned businesses, MOVMA liaison LaShondra Jones said.

The overall goal was to highlight the entrepreneurs and business owners who served in the military and now contribute to Houston’s booming economy, Jones said.

HRVCC president and founder Dave Weaver said the expo brought together 103 exhibitors to meet in person and build relationships with other veteran-owned businesses.

“Through the advocacy and outreach of the expo, it gave us a chance to talk not only about the expo but about the veteran business economy as a whole,” he said. “We also now have the groundwork down to build on this effort and showcase veteran-owned businesses all year long and will be exhibiting more of them next year and sharing those success stories.”

“The event proved to be a great success. Many attendees were surprised that this event was being held and were extremely impressed to see many so many veteran-owned businesses,” she said. “We’ve decided on a different, much larger venue for the 2023 expo because we expect it to be bigger and better now that the word is out.”

Although Houston has the second largest veteran population in the U.S., many veterans are still unaware of veteran owned businesses, Jones said, so social media and old-fashioned word-of-mouth campaigning helped spread the word.

“By having events throughout the year, we’re able spread the word at the chamber’s networking mixers, roundtable discussions and symposiums,” she explained. “Because MOVMA is committed to seeing the growth of our local veteran-owned businesses, we will continue to spread the word to spread awareness. We’ll continue to highlight veteran-owned businesses on MOVMA’s social media platforms.”

Jerome “J.J.” Johnson, a U.S. Navy and Air National Guard veteran, represented one of the many veteran businesses present at the expo.

“With it being the inaugural event, it’s all about getting the word out. There are a lot of veteran-owned businesses, but a lot of veterans don’t know about them,” said Johnson, a senior mortgage broker with Edge Home Finance Corporation.

Johnson also said because Greater Houston doesn’t have a large military base and veterans tend to be scattered across the area, some residents are unaware of the veteran presence.

Weaver said the key takeaway from the expo is that many veteran-owned businesses that previously didn’t self-identify but are now excited to.

“We want the community to support these businesses which ultimately helps to promote the well-being of veterans as well as their families,” he said.

HRVCC and MOVMA have already begun plans for next year’s expo, which is tentatively planned for September 2023 at the George R. Brown Convention Center, Jones said.

“We are looking to grow it to showcase 500 exhibitors to include veteran-owned businesses and military spouse-owned businesses, as well as veteran employment and resources expo,” she said. “We want it to become a great Houston event supporting and highlighting our veteran community in many ways.”