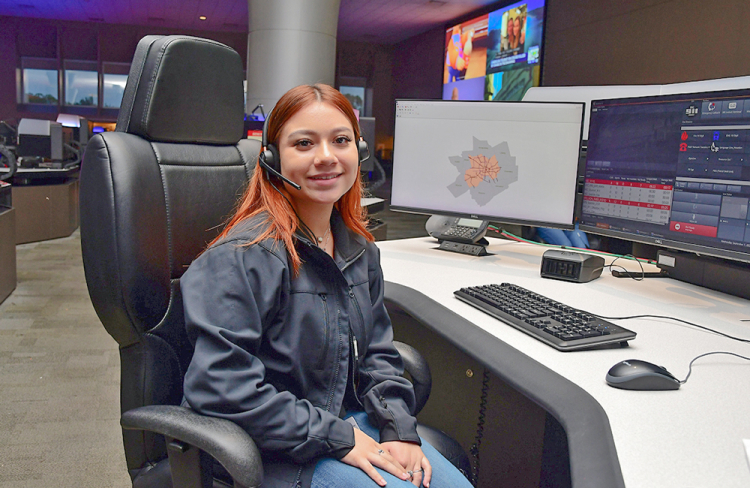 Crystal Estrada, a senior at the High School for Law and Justice, sits at her workstation ready to start her shift. Photo by Pete Mayes

Crystal Estrada is a 17-year-old high school senior, cheerleader, Junior ROTC member, and active in other clubs. She’s also a 311 intern with the Houston Emergency Center, taking calls from the public to help those in need. And she admits the job sometimes makes her feel like a superhero.

“I might walk down the street and the lady I passed by might not even know that I was the one she talked to,” Estrada explained. “Sometimes you’ll have people who will cry to you or people who will yell at you. I don’t think they ever realize there’s someone else on the other end of the line.”

“Knowing that you’re that person taking those calls and you’ve helped so many people, it’s an amazing thing to think about.”

Now in its 15th year, the City of Houston Office of Emergency Management partnered with Houston ISD High School for Law and Justice in 2007 and created a paid internship for its high school students to get practical experience in the field of telecommunications.

“We are the only one in the nation. No other emergency call center has an internship program with high school students answering and processing non-emergency calls,” said Rosa Navarro, an operations manager with HEC’s 911 Operations.

“This internship is the key to open many doors to success for the interns and for the City of Houston,” Navarro said. “The interns are students who are passionate about their career path, are eager to learn, and love to help the public while applying their knowledge and skills learned throughout the program.”

Estrada’s journey into law enforcement began as a student at Hamilton Middle School. After receiving high scores on a matrix test, she was given options to attend various magnet school programs across the city. She said it wasn’t something she wanted to do right away, but once she learned about the high school, that became her sole focus.

“I had tunnel vision. It was the only school I applied to,” she said. “My mom kept telling me I needed another option just in case, but I wanted to go to this school.”

Estrada was accepted into the High School for Law and Justice, a magnet school in HISD that specializes in criminal justice, with the intent of becoming a police officer. She learned about the HEC internship program in her sophomore year and was reminded to apply for a spot in her junior year, she said.

“I thought this was something different that I wanted to try and see if it’s something I like and can do in the future,” she said.

According to Navarro, HEC provides a six-week training program for the students consisting of two weeks of classroom training and four weeks of hands-on training with an 8-hour evaluation. Once the intern completes the training and passes evaluation, they are released to work on their own.

The students start their training during their junior year of high school. The internship program is designed to train the students on how to handle 311, or non-emergency, calls from Houston residents.

“The high school is equipped with HEC’s equipment and software for the students to get the real experience.  Those high school seniors selected to join the program start the official training with HEC during the summer,” Navarro explained.

Once they graduate high school,  they are already 75% ready to become full time telecommunicators and move up to handling 911 emergency calls, Navarro said.

The students work 20-hours a week as paid interns. They can work either an afternoon shift from 2-6 p.m. , or an evening shift from 6-10 p.m. They all have partial weekends off, either working a Friday/Saturday shift, a Saturday/Sunday shift, or Sunday/Monday shift.

These schedules give the student time to complete all schoolwork during the other four hours they don’t work or during their weekend, Navarro said.

Estrada said she felt nervous the first time she walked into the HEC building, but she remembered sitting in the chairs in the training room at school and said it felt familiar. “I realized this is stuff that we practiced for, and I realized there was no reason to be nervous,” she said.

She remembers one of the first calls she took involving a woman wanting an officer to take her to a homeless shelter.

“I told her officers usually don’t give rides, but they can provide information to the nearest ones, and at that point she did threaten to kill herself,” Estrada said. “My trainer walked me through it. In my head, I was like ‘311 was not for emergencies and that it wasn’t going to get this crazy.’"

“We had enough information to send someone out there and get her help. No matter what, you have to figure it out and try and help the person,” she said.

Navarro said HEC usually accepts 20-30 interns every year, and hires half of them as full-time employees after they’ve completed the internship. “This is an opportunity for the students to succeed in life and it opens a lot of doors for them,” she said.

It certainly opened a door for her. Navarro got started in her career with the city as an intern with the same program.

“When I started as an intern there were only 10 intern spots available for the program as compared to now 20-30 spots. Currently the training is more extensive than it was 13 years ago, when I started it only was four weeks long,” she said.

Although the program has changed a lot, Navarro said every change has been done to make the program better.

“As you know the city has grown, so I can tell you that now is a little busier than it was when I was an intern. The call volume has increased,” she said. “Extending the training is given the students more time to learn our procedures and protocols,” she said.

As a shift manager, Navarro said she relishes the idea of being able to positively influence the interns.

“I still get the opportunity to serve as a mentor to the interns. It’s a culture that we have built, every class knows that if they need any type of help during their training phase, they can come to me or to any other former intern,” she explained.

Estrada says the other HEC interns have become like family.

“We talk to each other all the time. We always tell each other before we start a shift, ‘OK, let’s go get ready to save some lives.’ We say it as a joke, but on some of these calls, we do save lives,” she said. “It’s an amazing feeling to have. It’s not something that we go batting around, but it’s something that we all feel when we come into work.”

And just like the saying, this isn’t just a job for Estrada … it’s the beginning of a potential career.

“Don’t go into this thinking it’s just another job. This is something that is a completely different experience,” she said. “It’s something to stay on top of. You might not ever get it again, so if you want to do this, focus on it and go for it.”