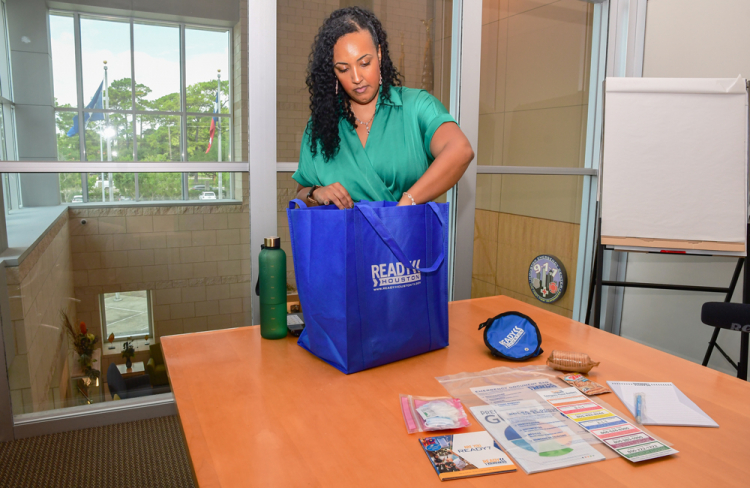 Allison Hudson of the Office of Emergency Management demonstrates the container for her pet food and treats that she uses in her hurricane preparedness go kit. Photo by Pete Mayes

Having survived every major hurricane that hit Louisiana since Katrina, Allison Hudson has become an advocate for citizen preparedness in case they need to evacuate their homes.

“I dealt with it personally and professionally,” the former Ascension Parish Sheriff’s Office public information officer said. “The last one I worked was Ida. I had already put in my two weeks’ notice with the office, but when (the hurricane) hit, I told the sheriff I would stay and help. That’s what we’re supposed to do.”

Now working as a PIO for the City of Houston Office of Emergency Management, Hudson shares her experiences with residents while also helping them plan and prepare for natural disasters.

Hudson stresses the importance of being prepared during hurricane season. She views preparedness as more than a government responsibility.

“We do have an order of business to do that, which most often occurs during recovery and that’s when FEMA comes in and offers resources and other support as well,” Hudson explained. “Preparedness, however, should not just be on government officials. You have a right as a citizen and a homeowner or renter to have some type of preparedness plan available.”

To support preparedness, she teaches residents how to create hurricane go kits, which are bags containing personal items to be used for survival for several days.

An essential item to have in your go kit is cash. “You can’t always assume the ATM will be open or the debit card machines will work due to connectivity issue,” Hudson said.

Food is another item to keep in your kit. “When you don’t eat, you get a headache, and then you get 'hangry,'” Hudson said. “And when that happens, you get an attitude and take it out on people. So, you want to make sure you have that as well.”

Hudson said it's also important to have proper clothing, especially if you must wade through floodwater. 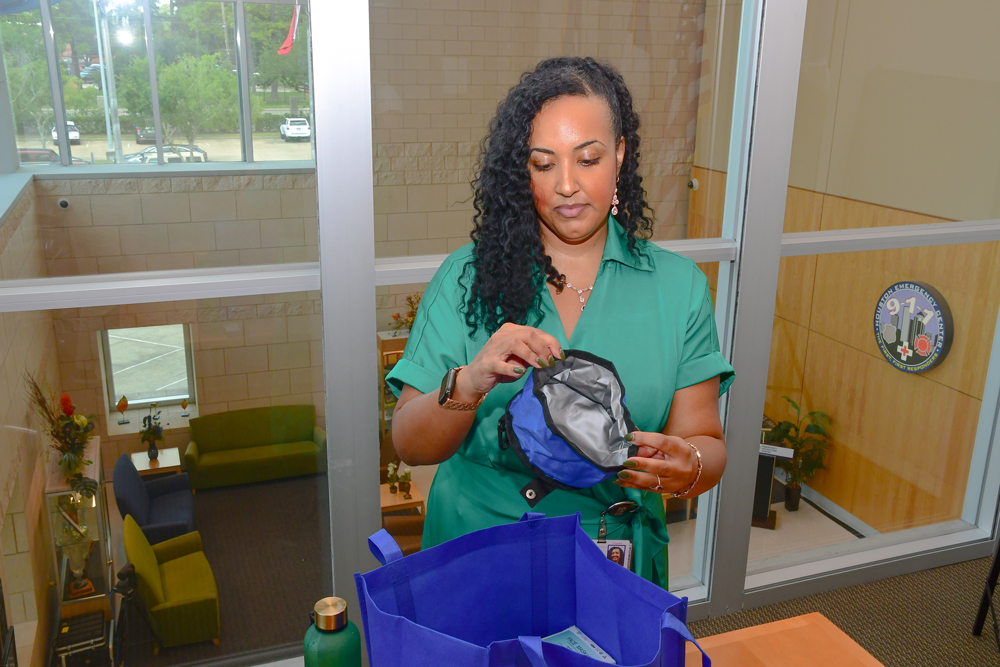 “You want to think about rainboots and tennis shoes, but not sandals. Think about socks, long pants, T-shirts … stuff that you can layer in because you might have to be in a shelter for a while and it’s freezing cold, but during the day you’re going to your house and cleaning up,” she said.

Clothing is also important if a person needs to help rescue their neighbors, Hudson added. “You can’t do it in sandals. Also, if you’re going to be in floodwater, you will be dealing with snakes and insects,” she said.

Having paper copies of emergency contact telephone numbers placed in a waterproof documents bag is also important. Hudson said she helped senior residents at the Kashmere Gardens Multiservice Center include the documents in their personal kits.

“We did this as part of Mayor Sylvester Turner’s Complete Communities Initiatives,” she said. “I spoke with them about hurricane preparedness and talked about having a document bag, and they asked me to come back and show them how to make one. Everyone literally brought all their documents and that’s what we worked on.”

Hudson used her personal experience involving her father and her own illness to highlight the importance having emergency contacts as part of a go kit with one of the seniors at the multiservice center. She was undergoing chemotherapy and was traveling to a basketball game when she said she got the call about her father who had suffered a stroke.

“I had to call my doctor to let them know where I was. He called the hospital, and I was able to get my treatments and medications while I was with my father. I was also able to tell the doctor what medications my father was on to help him,” she said.

“You must advocate for yourself, and if you’re able to tell your doctor that your information is in your document bag, that helps first responders help you. It’s always important to have those numbers on a piece of paper and not on your cell phone that can go dead.”

Hudson also said residents have a responsibility to check on those who are disabled and have special needs.

She added those who have disabilities want to be treated fairly, and the public must include them and ensure they at least check on them to see if they have what they need. “It’s always important to have that information in your go kit.”


OEM’s Allison Hudson demonstrates what essentials you need for your personal hurricane preparedness to go kit.