Cadets on training: ‘It was rough’ 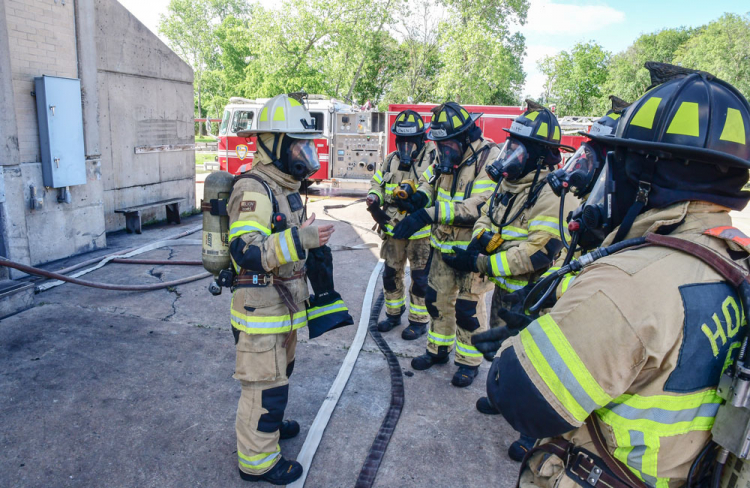 Curtis Hill, left, district chief of the Houston Fire Department’s Val Janhke Training Facility, does a check on learning with cadets who were training to enter a burning building in full gear during searing temperatures. Photo by Pete Mayes

It’s no secret how hot this summer has been. Imagine training to become a firefighter in it.

“It was very tough. You’re sweating inside your gear that doesn’t breathe at all. My legs are shaking, I’m so tired right now,” said Brandon Perkins, a 21-year-old college graduate who was drenched after finishing the consumption drill at the Val Jankhe Fire Training Facility. The grueling drill requires cadets to climb up and down a five-story tower dressed in full gear until their air tanks are depleted.

With July temperatures sometimes exceeding 100 degrees, the 50-plus cadets were tested.

“It was tough. A little touch and go there for a moment,” said Cadet Tiara Robinson, a Lufkin native and former U.S. Army soldier. “I didn’t know if I was going to be able to complete it, but I got it done.”

Not even her demanding Army Basic Training, including chemical training exercise known as the gas chamber, would make the consumption drill a breeze.

“I thought that was bad, but I can’t even compare the two because this is so overwhelming,” she said. “The gas chamber wasn’t a joke, but this is a whole other animal.”

Robert Swink, a cadet from Memphis, Tenn., was a former firefighter back home, but admits the Texas heat is worse here.

“It’s way hotter here,” he said. “Nashville can get pretty hot, but Texas heat is different. The humidity and constant heat make the difference. It feels like it’s year-round.”

Dealing with these types of conditions is the reason firefighter training in the heat is so crucial and begins even before the cadet steps foot onto the academy grounds after receiving a conditional job offer, said Curtis Hill, Janhke Fire Training Facility district chief.

“We tell them how difficult the job will be and talk to them about the importance of hydration and proper nutrition when we first meet with them,” Hill said. “You’re in a constant state of dehydration here at the fire department, and it’s important they start hydrating their body one month in advance before they get here.”

One thing they try to do immediately is get the cadets to stay away from energy drinks and supplements. “Being in that constant state of dehydration, it’s not necessary,” Hill said. “We also provide cadets electrolytes and water out here. Most cadets are also drinking Pedialyte because it’s less sweet.”

Hill said the academy also discourages cadets from taking protein shakes, explaining that too much protein makes it difficult for a person’s kidneys when they’re dehydrated.

“We tell them to just eat regular food,” he said.

Since there is no way to make fires cooler during the summer, Hill said the academy keeps actual fire evolution training to a minimum. When fire training is required, they try to conduct it as early in the day as possible, he said.

“We also reduce work cycles. Evolutions that normally take 45 minutes are broken down into two 25-minute exercises with a 10-minute water. It mimics the actual fireground expectations,” he said.

A firefighter cadet can expect to be in the academy for eight months. Getting the cadets acclimated to the heat is also a challenge, so adjustments are made to their training schedule. Physical training is usually conducted in the morning before the sun comes out.

On days that are particularly physical, morning PT is canceled and fire training is conducted instead. The training is often done in the shade outside or inside the gym. Lectures are conducted during the afternoons so that cadets are inside during the hottest part of the day, Hill said.

Hill said the staff tries to not throw too much on the cadets when they first arrive. “We slowly build up the amount of physical activity they’re doing and the amount of time they spend in the sun and the heat,” he said.

“But we have to introduce these elements to them because the first day out of the academy it could be 107 degrees, and they could be at a building or warehouse fire that they have to work at. So we have to get them to that point where they’re acclimated, but we understand that many of them aren’t used to working in their gear.”

The gear weighs 60 pounds dry, even more when wet. The air pack adds weight, Hill said. The equipment does not breath. That protect firefighters from burns but also makes it very uncomfortable during summer months.

“It’s meant to minimize the heat exposure that the firefighter will take, but it traps the heat inside because of that and causes them to be encapsulated. If the gear is too ventilated, the heat gets on the firefighter,” Hill explained.

He also said acclimating the cadet to working in the heat wearing their gear is a priority. They do so by incrementally increasing the amount of work time the cadets are allowed wearing their equipment to help them get used to the weight, heat and claustrophobic nature of the gear.

“They initially do PT without their gear, and then they slowly increase the amount of time spent working in the heat of the day,” Hill said. “The initial time might only be 10-15 minutes, but as training and acclimation increases, fire gear is introduced. Clocks are set up, and work times and difficulty are gradually increased.”

During a fire that might take 45 minutes to put out, Hill said one company fighting the blaze will take a 20-minute break to hydrate, cool down and briefly take their gear off while another company fights the fire.

“You have to call in more firefighters to manage the workload,” he said.

The academy also has trained EMT’s and paramedics on hand to help identify potential heat casualties.

“Our staff has been trained to recognize heat-related medical emergencies. We try to keep them to a minimum, but everyone is different,” Hill explained.

“If they’ve had more emergencies in the past, they’re more likely to go into them again. We try and keep a close eye if they start showing cognitive problems, responding to questions, etc. We pull them out of evolution to cool them down.”

Hill also said the staff will talk with cadets about their medical conditions, as well what medications they are taking.

“We make them sign paperwork that says if they go on medication or are not feeling well on a training day. It doesn’t excuse them from activities, but it allows us to keep an eye on them closer,” he said.

A few cadets like Wesley Wilson were not as bothered by the conditions. Wilson, a Houston native who was a firefighter in the Woodlands, was practically dry by comparison to his fellow cadets who completed their rotation inside the burning building.

“I’m used to it. It was hot inside there, but I work out a lot. I run in the sun, so my body’s acclimated more,” he said.

“I’m not going to say it’s nothing because it’s hot in there. But that’s the name of the game,” Wilson said.