COH veterans get a helping hand from within 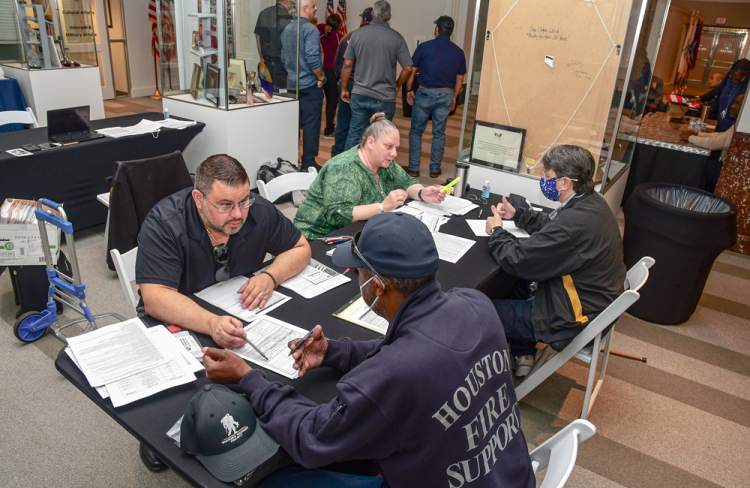 Representatives from the Michael E. DeBakey Veterans Administration office work with COH veterans on getting their military benefits from their time in service. Photo by Pete Mayes

For former servicemembers like Juan Castanon, making sure that paperwork to receive medical benefits is in proper order often is an afterthought.

Castanon enlisted in the Marine Corps in 2005 and served until 2013. During his years of service to his country, he deployed four times — once to Iraq in 2007, twice to Afghanistan in 2008, and again for the final time in 2013. For the longest time, he didn’t claim his medical benefits from his active-duty service because he thought he was relatively healthy.

“When I came out the military, I thought I was lucky. I just had a bunch of nagging injuries like swollen ankles, bruised elbows, but nothing serious. I didn’t think I was going to have any disabilities,” Castanon explained.

That was then. Time has passed and Castanon, now an officer with the Houston Police Department, found himself sitting in the Legacy Room at City Hall in early April among a group of 82 fellow veterans. They were waiting to speak with representatives from the Michael E. DeBakey Veterans Administration Medical Center about filing for benefits as part of a program organized by the Mayor’s Office of Veteran and Military Affairs.

This is first time the division has ever conducted a program like this with the VA, said Robert Dembo III, MOVMA director. Events like this represent the first steps the city is taking to address the needs of their veteran employee population.

“We’re getting a lot of positive feedback and we want to let our veterans know we’re here to reach out to them. Whatever benefits they are entitled to, this is a great place to be,” Dembo said.

MOVMA was not alone. Camp Shield, a nonprofit organization that focuses on empowering female veterans as they transition from the military to civilian life, also had a presence on that day.

“For me, the importance of being here is to let the women veterans know there are programs specifically for them and their families here in the city of Houston and across the entire state of Texas,” said Maggie Peterson, Camp Shield founder.

Many of the veterans who attended the event represent a still prevalent military mindset that is only beginning to wane: the macho, “tough it out, drink water” mentality that is a by-product of the warrior culture.

Castanon said that was his mindset. “I told my friends I signed up for that stuff. And they said: ‘You didn’t sign up for everything, you know, all the things that happened, like bad leadership and burn pits,” Castanon recalled.

In some respects, this is how the military ends up getting many of its veterans lost in the shuffle of care after they hang up their uniforms: the belief that this is something that they signed up for, that it’s part of the code.

Many of them have been out of the military for years but never filed a claim. Others filed VA claims years ago but were denied, then became discouraged and did not file an appeal, according to MOVMA liaison Lashondra Jones.

“They just moved on with their lives and focused on their families and careers,” she said.

Jones said MOVMA’s enthusiasm and willingness to help connect city veteran employees directly to VA representatives sparked something within them. “It seemed to give them hope that someone cared that they were getting benefits that they earned as a result of their service to this country,” she said.

Castanon said his friends convinced him to attend and inquire about his benefits.

“They told me it might not be apparent now, but as I get older, the injuries might creep up on me,” he said. “I should have filed a claim as soon as I got out, or even before I got out.”

The City of Houston created MOVMA in 2007 to advocate on behalf of active duty, guard and reserve servicemembers, veterans and the larger military-affiliated community (including spouses, caregivers and dependent children). The division also coordinate and facilitate access to resources through federal, state and local initiatives and programs.

Many veterans, however, were unaware the city offered those services to and for them.

“I didn’t even know this existed. That’s good to know,” said Anthony Boddie, a former radio operator in the Marine Corps who serves as a captain in the Houston Fire Department Kingwood Station 103.

Boddie and fellow firefighter Jonathan Jackson were among the veterans who attended the seminar in hopes of getting questions answered about how to file their paperwork.

“I filed my claims on my ankles, shins and knees. Before, when they would go back and check my service records, they would say, ‘Well, we don’t see anything,’” said Jackson, a Navy veteran who currently works doing aircraft rescue for HFD.

Jackson suffered knee and back pain in the service. He said he didn’t consider it a big deal at the time and just “worked through the pain.”

“I had pain also in the fire department, but I was still going to the VA telling them I was in pain. They said it wasn’t service connected, but at the same time they’re giving me medication. I came today hoping I could get some more help to see why those claims are being denied,” Jackson said.

It was the same for Boddie. “I filed a claim a while back, but it got denied. They said as long as it was in my military record, it would be OK,” he said.

Boddie also admits he didn’t go to sick call frequently when he was in the service.

“I was kind of trying to stay away from that. I don’t know if it was a ‘macho thing’ or what, and every time they gave you ibuprofen anyway,” he said.

This is a commonplace attitude among servicemembers and veterans, especially among the older generation. Jones, herself a Marine, said it was the culture taught in boot camp, in the fleet, and in combat.

“You get the job done because it’s all about the mission. You don’t want to be seen or viewed as ‘the weak link,’” she explained. “Going to sick call clinic or the hospital was forbidden. Unfortunately, for many of us, including myself, we just ‘sucked it up’ even after we transitioned to the civilian sector of society.

“There’s that stigma that we don’t want to be attached to us — to be viewed as incapable of being the best at their job based upon any ailments or injuries sustained during military enlistment,” Jones said.

Jones said it’s never too late to seek VA benefits. “We’ll be here when they need us. It’s our job,” she said.

Boddie and Jackson agreed having the VA representatives at the Legacy Room in City Hall to work with COH veterans was step in the right direction.

“It’s definitely helpful and someone actually talked to us instead of ‘go read this or that,’ so that makes it better,” Boddie said.

“For me, it’s a lot of information, so to read through all of it and understand exactly what you’re filing and if you’re filing it right is a bit of the problem,” Jackson said. “I think I’ve been filing incorrectly. Knowing how to file correctly and get help has been a long time. Hopefully I’ll get that help.”

Jones said MOVMA is here to support every veteran employed with City of Houston, whether they are seeking assistance to file for benefits, in need of financial assistance for rent or mortgage, outside referrals for mental health counseling, or peer groups, etc.

She also said MOVMA will be more involved in the community by having days of service, which include opportunities to help agencies that serve the less fortunate; developing partnerships to promote veteran-owned businesses in the community which they will spotlight; and encouraging COH veteran employees to go out and support service-related activities.

“We want to encourage more COH veteran employees to be more involved in our float that we have in the yearly Veterans Day parade,” she said. “Overall, when prior servicemembers can showcase their military branch, regardless of the department that they are currently assigned to, it brings about camaraderie, sparking that excitement and pride that we once had while serving our country.” 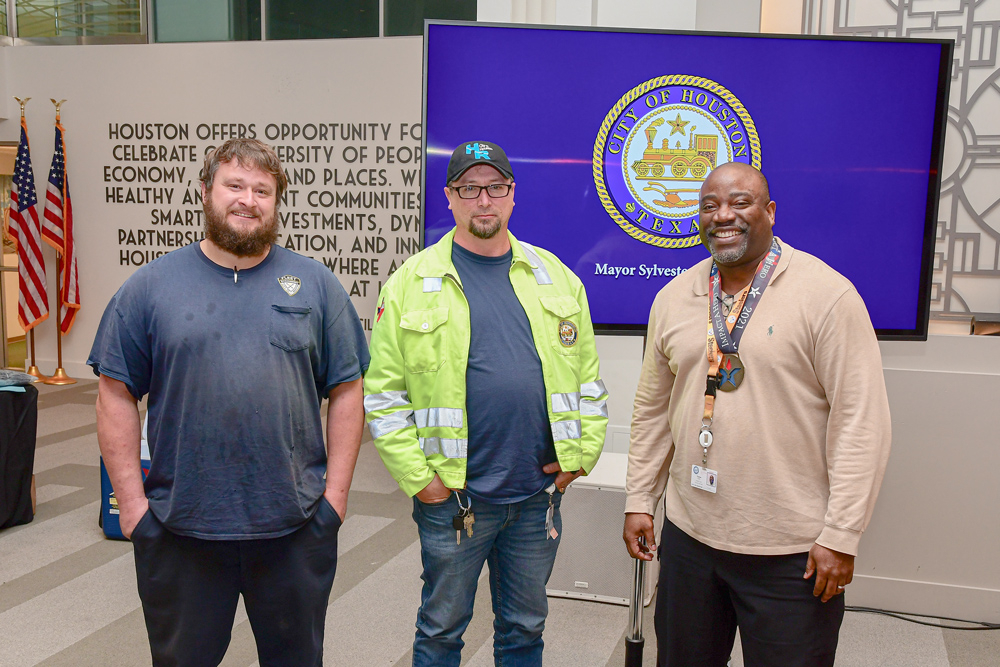 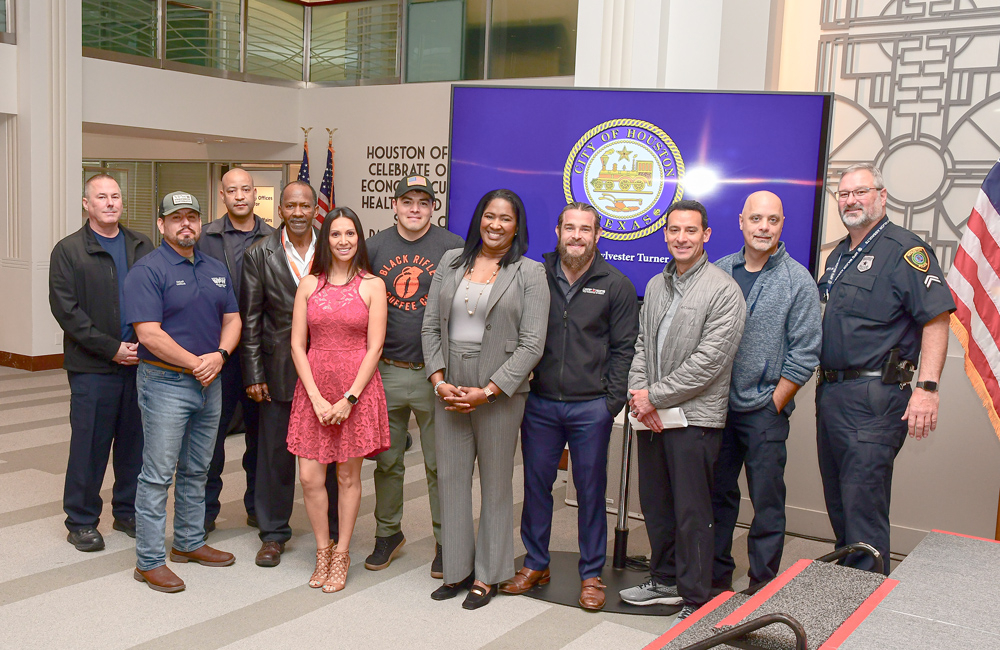 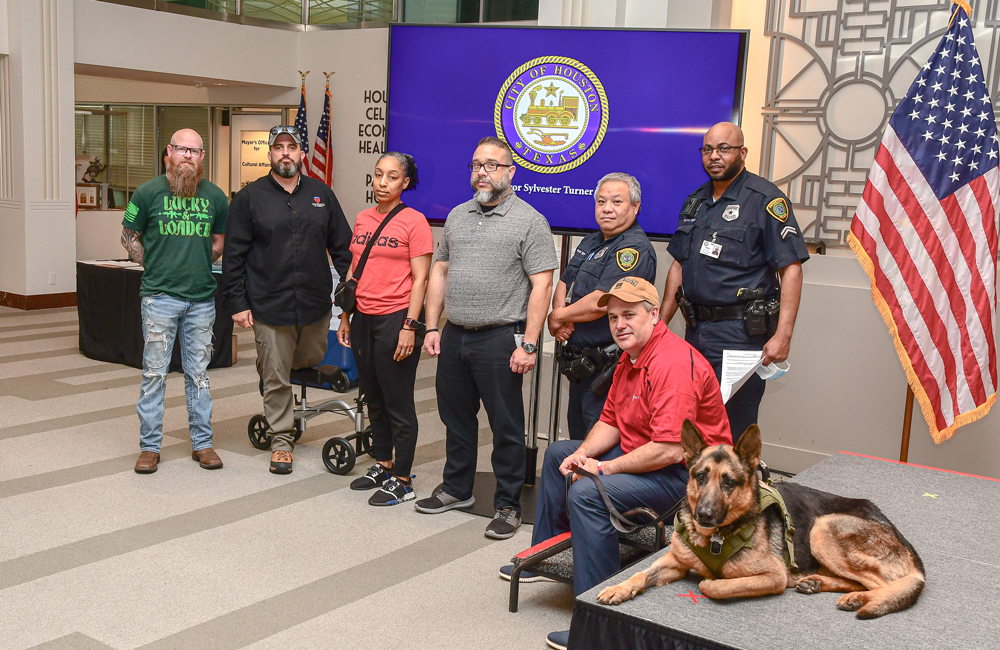