His name is Richard Reyes. You know him as ‘Pancho Claus’ 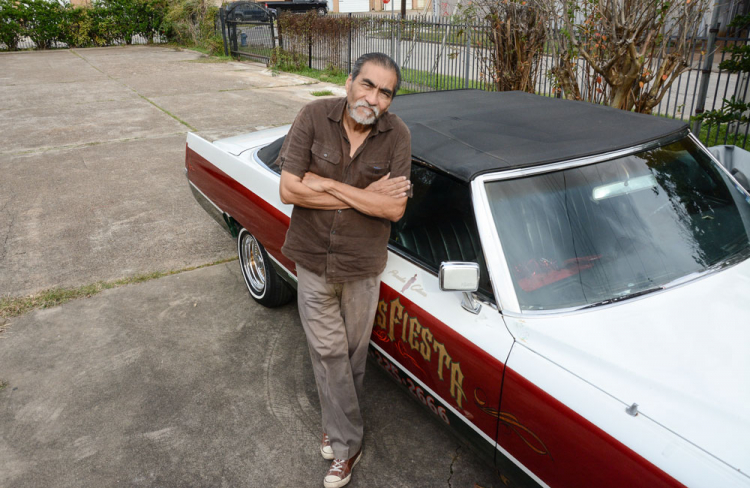 Richard Reyes poses next to his “Taxis Fiesta” low rider at the Latino Learning Center, and with Houston Mayor Sylvester Turner and community partners Disaster Recovery Services, who donated $10,000 to help him buy toys for underprivileged families in Houston. Photo courtesy of Pete Mayes

It was 1981, and on the bottom front page of the morning edition of the now-defunct Houston Post newspaper was a picture of a man dressed in a red zoot suit, black fedora and sunglasses handing out wrapped presents from his low-rider automobile to kids.

The photograph’s cutline read: “A man who goes by the name ‘Pancho Claus’…”

Year after year, he kept showing up in the local media, until his legend grew. 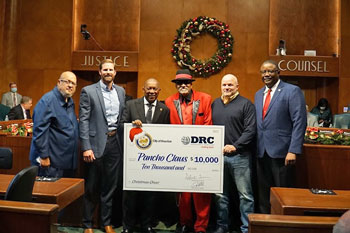 Today the Pancho Claus legacy is well known and uniquely Houston, even though there are at least two more versions of the beloved Christmas character in the state.

Writer and actor Richard Reyes is the one and only original, though. Reyes turned 70 this year, and his iconic character is celebrating 40 years of bringing Christmas joy to underprivileged children from the Second Ward — where it all began — and all over the city.

He’s also battling a myriad of health issues — from heart issues, diabetes, blood pressure and more. But just like ol’ Kris Kringle himself, the twinkle in Reyes’ eyes still shines and the desire to keep going persists.

“I’ve decided my great scheme is that I’m going to be Pancho Claus all year round so I can start again at 40. So I think that’s a plan,” he said, laughing.

As always, Reyes and his crew of volunteers with the Pancho Claus Project are busy collecting and wrapping toys and gifts they’ve collected from the community at the Latino Learning Center that will be distributed to families in need.

Last Christmas, the COVID-19 pandemic made the annual gift giving event challenging. The key sponsors filed bankruptcy and were unable to provide the financial support they had in the past.

“The other way we get toys, people pick them up from the community center, take them to their restaurants, businesses, bars, family parties, company parties, etc. During COVID there was nowhere to take them,” Reyes explained. “People lost their jobs, and even if they got their jobs back, they were behind on their bills, so toys were the last things on the list, but we overcame it.”

Reyes overcame the lack of sponsorship last Christmas came by starting a GoFundMe page. Through it, Reyes said the organization was able to raise the money they needed and provided gifts to 15,000 families.

This year, the Pancho Claus Project raised more than $37,000, including a $10,000 donation from the City of Houston and community partners, Disaster Recovery Services. Mayor Sylvester Turner and representatives from DRC presented a check to Reyes at a city council meeting Dec. 8.

For Reyes, looking back has been a journey about finding out about himself and helping others. 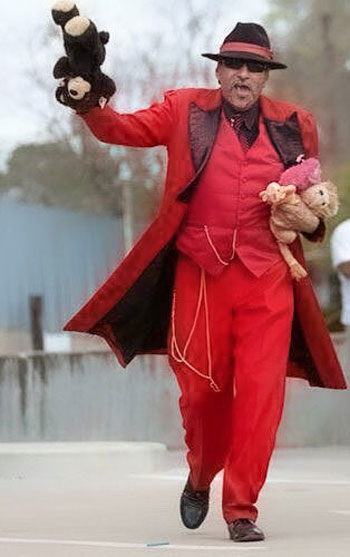 Reyes was born in Olton, Texas, but has been in Houston since he was 4 months old, when he and his mother, a migrant farm worker, moved here to find work. His journey to self-discovery began in the late 1970s with a miniseries about the experiences of an African slave from his homeland to the U.S.

“What got me motivated was the miniseries Roots by Alex Haley. It showed on ABC for a few days and showed the African American community what they had been through,” he said. “It got a lot of attention, and it got my attention. I was raised in predominantly white neighborhoods and I didn’t know a lot about my roots.

“I was in my late 20s and decided I wanted to find out, so I went to a Cinco de Mayo festival at the old Albert Thomas Convention Center in Houston and there was a group there called Talento Bilingue De Houston. I asked if I could join and they said, ‘Yes, we need a stage manager.’

“And I was like, ‘Yay! I get to be a manager the first day.’ But I didn’t know it meant sweeping the stage, watching the props and giving actors lines,” Reyes said. “But I had a good time.”

Six months later, Reyes said he looked at the schedule and saw “Pancho Claus” written on it.

“I asked what the play was about, and they said, ‘We don’t know. We haven’t written it,’” he explained. “They knew I had been taking writing courses at the University of Houston and asked if I wanted to try writing it, so I agreed.”

The original idea for Pancho Claus was a man wearing a sombrero and serape pulling a burro. Reyes, however, had other ideas.

“Edward James Olmos had just come out with the movie, “Zoot Suit” and it was all the rage. We were having zoot suit and low rider contests in Houston and I wanted to attract teenagers, so I decided to go that direction,” he said.

“The first thing I did was a write an adaptation of ‘Twas the Night Before Christmas.’ I read it to the director, and he said, ‘That’s great; now write the play that goes with it.’ So, I wrote the play and that’s how it started.”

Reyes said it was a fluke that he wrote the play at all.

“I had only been with the group since April, and I wrote this in November, so they didn’t know me that well,” he said. “They knew I was taking writing courses at UH, but they also knew I was a freshman. I didn’t have any big credentials.”

What initially started as a children’s play soon blossomed into a musical act and other entertainment events.  Then Reyes said it turned into something else.

“I started getting phone calls and letters from people saying, ‘Hey look, this family over here, their house burned down; or this family here, their mom is in jail.’ They didn’t see me as an actor. My community for some reason thought I was Pancho Claus in the city to help people,” he said.

That’s when things took off.

“The first year, we had 10 names of families, and me and some friends got together with some bags for different families. And the next year we did 30 bags, and so on. And now we’re up to 15,000,” Reyes said. “That’s how it started. We didn’t even do any performances last year. Just gift giving, and it was great.”

The gift giving eventually spread beyond Reyes’ beloved Second Ward community on the city’s East End. Besides the annual Christmas toy collection and giveaways, Reyes and his group also serve underserved youth across the city with various afterschool programs throughout the year.

“I’ve always had that side of me to help people. During the rest of the year, I would work at detention centers teaching art, break dancing, writing, etc. I always had a heart for underprivileged kids,” he said.

“I get asked to come to a neighborhood middle or high school and get asked which kids do I want to work with after school. I always said I wanted the 10 worst kids you have, whether they’re bullies, truant, have bad grades, smart-alecks, whatever. We’d make a real interesting club, with field trips and all kinds of stuff going on, creatively, and then the good kids would want to join.”

“This was my plan: to mix the good kids with the bad kids and they learn from each other,” Reyes explained. “The bad kids learn you don’t have to fight every day and the good kids learn they’re lucky to have people who care for them. I always have done things like that, and I guess it just lends itself to this.”

Santa Claus is “My Primo”

When former FOX News anchor Megyn Kelly declared Santa Claus was a white male in 2013, Reyes said he was contacted by local media to speak on the subject. This was the moment he explained the true meaning of what Pancho Claus represents. 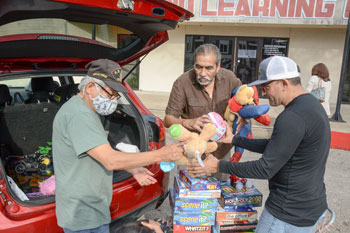 “When I first wrote the play, I wasn’t intending to take away from the legend. The play is about a zoot suiter who helps an underprivileged kid. But at the end, I take off my hat and my sunglasses and tell the audience, ‘Look, I’m not Pancho Claus. I’m Richard Reyes. I’m an actor. And this is a play,’” he said.

Reyes said it’s important for the public to understand what Pancho Claus represents.

“What I’ve tried my best not to take away is that magic of Santa,” he said. “Kids believe in that; parents believe in it for their kids. And I believe in him. In the play, I call him ‘my primo; we call him Eduardo.’ I’m not Pancho Claus; I’m the spirit of Pancho Claus.

“It’s the lady that came to pick up donation boxes from the Latino Learning Center. It’s the man who came to drop off toys he collected. It’s Miguel, a volunteer who picks up posters… it’s your abuelita, your teachers, those people who pick up the slack when Santa fell behind. Those are Pancho Clauses. It’s a whole spirit and a whole community.”

Reyes said people often ask what’s going to happen when he’s no longer able to be Pancho Claus. He’s preparing the best way he knows how, he said.

“I’ve had people call me saying, ‘There are folks wearing red suits and saying they’re Pancho Claus. Do you want me to take their picture?’ I tell them to contact that person and tell them to come to the center and get more toys and some extra red suits, and you can go to your neighborhood and be Pancho Claus there,” Reyes said.

“I’m hoping the community will get the message to do this on their own. They’re already doing it, but they have my blessing to do it. And may be people will just want to do it.”

But in a moment of patting himself on the back, he acknowledged he might be a tough act to follow.

“I don’t think one person could do all that I do,” he said proudly. “There’s the play, a band, parades, etc. … I think they would have to have at least three Pancho Clauses. That’s why I want to get the community used to the idea that it doesn’t have to be me.”