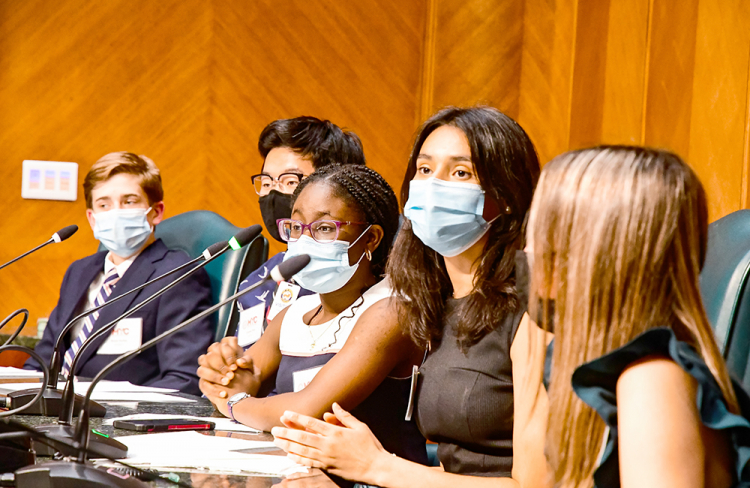 Program encourages youth to be active participants in their communities and schools.

Moments before she introduced Mayor Sylvester Turner, Dr. TaKasha Francis asks members of the audience gathered in the city hall chambers to read out loud the words posted on the left side chamber wall: “THE PEOPLE ARE THE CITY.”

Also inside the chambers are the 15 newest members of the Mayor’s Youth Council, waiting to be sworn into their new duties and their families. Modeled after the elected Houston City Council, the MYC provides its members valuable experience in the workings of city government and prepares future leaders in our communities. The members were sworn in during a special ceremony Oct. 12.

“The reason I’m excited about this program is because this is the introduction many of you all will have to civic service and engagement,” said Francis, who is the director of the City of Houston’s Department of Neighborhoods, which oversees MYC. 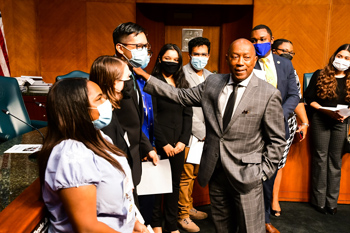 “Former President Barack Obama used to talk about ‘the audacity of hope’, and still talks about our youth being our future. What I admonish you all to do is be the change you want to see, and by participating in the Mayor’s Youth Council, understanding that the impetus for this program was to bring local and civic government to you so you can understand how your city works.”

DON administers the Mayor’s Youth Council (MYC) program and serves as mentors and advisors for young leaders as they learn about city government and gain civic affairs experience. More than 100 applicants applied for the positions.

The youth council members include a chair, vice chair, secretary, aides, and 11 district and 5 at-large council members. There is also a historian and a webmaster. The term of office runs from October through May.

Francis also noted the mentorship advantages the MYC offers to its newest members. “This will be a great relationship because as we mentor you all, we get to see you go out and do great things,” she said.

“You have a voice that needs to be heard and it is captured through this vehicle we call the Mayor’s Youth Council,” Francis added.

Turner had an opportunity to speak to the newest members of the MYC, congratulating them on their selections to their seats, and encouraging them to be involved in the process. He also touted the diverse representation of the council. 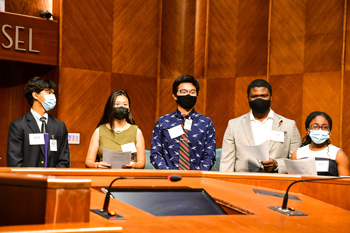 “Each one of you represents one of our districts and there’s a councilmember for each of the districts. This is the fourth largest city in the country … of all the cities across the nation, we are the most diverse,” he said. “When I look at the representatives of the mayor’s council, you all reflect the diversity of our city.”

Turner also said the young councilmembers are not just seen as future leaders, but leaders for today.

“The reason we put such a high premium on this group is that you’re not leading us for tomorrow; you’re leading us right now,” he said. “We have your back. We also want you to be active. Whatever you learn from here, take it back to your school, your communities, and together we can make this a better and greater city than what it already is.”

“The bottom line is you are leaders right now and your city is asking for your service,” Turner concluded.

The mayor also took a moment to add levity to the occasion as he reminded Hayden Mentzer, the representative of District A, that he is also a resident there. “Let me get my sheet so I can know my representative’s name he joked, so if I have an issue, I know who to call on,” he joked.

The new members of the Mayor’s Youth Council are: