HHD tech team does what it takes to tackle COVID

The Houston Health Department’s continual battle against COVID-19 is making progress against the virus that is wreaking havoc across the city, thanks in large part to its IT team. The tech team has been instrumental in establishment of 15 vaccination and contact tracing sites across the city, resulting in hundreds to thousands of residents being seen daily.

The technology gave HHD the ability to vaccinate thousands of residents daily, according to Kevin Granhold, the department’s acting chief technology.

“If this was a manual process, it would not have been that easy,” he said.

Granhold said the team’s contributions from the onset of the pandemic has resulted in saving thousands of lives, thanks to standing up contact tracing and vaccine sites, plus tracking millions of personal health data.

“The complexities are often not understood by non-IT people regarding who we’re contacting, the data being moved back and forth, etc. … none of that could have been done without IT being involved,” Granhold said.

Granhold oversees a team of approximately 44 tech-savvy experts comprised of a mix of full-time city employees, temporary workers and contractors. Prior to the pandemic, the department’s IT team consisted of 15 people.

“As the pandemic grew, we were fortunate to get additional help,” he said. “We ran day-to-day desktop operations making sure the tables and the systems were deployed out there, ensured the printers were available, and worked with Harris County Health Department on what lanes we were managing.” 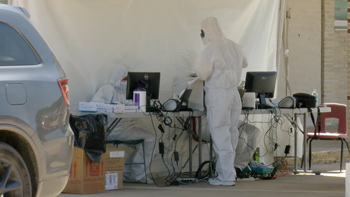 According to Granhold, the team had to take equipment out to the site every morning and bring it back with them every night because there wasn’t a secure place to leave it. The team spent an enormous amount of time managing sites across the city as well.

And it wasn’t just on the IT side. The entire team stepped in to help when and where they could assist at the contact tracing and vaccination sites they helped to stand up, going as far as registering residents who wanted to get vaccinated.

“I think everyone had to elevate their game. They were all on their ‘A’ game. A lot of these guys went above and beyond that. Most understood this situation was life or death related. The work we’re doing is responsible for saving many, many lives. I truly believe that,” Granhold said.

From the beginning, the team faced many challenges. The first was setting up call centers at the scene to make sure the HHD staff could communicate with one another. According to Michael Contreras, HHD IT project manager, the team had to work closely with HITS — both the security team and desktop team — to get additional equipment.

“We didn’t have enough. Most of our clinics have desktops, and now they have laptops, so they changed to a mobile workforce,” he said. “There was a lot of work involved in getting the laptops set up, security set up, making sure the encryption was in there, and then making sure they were able to get back into the city networks.”

Granhold said contact tracing at the George R. Brown Convention Center was one of the first big projects the IT team had where they had hundreds of contract tracers working on site. Rolling up their sleeves, they came in and installed cubicles, networking capabilities, PCs, laptops, and set wireless infrastructure and the right applications the contract tracers needed to do their jobs.

“The amount of data the city started receiving from our health partners in the Houston area was “many, many times what we normally received,” he explained. “Where we might normally receive thousands of records, we were receiving instead millions of personal health records.”

“THE COVID-19 virus overwhelmed all the usual data we receive from the public about health-related issues, including tuberculosis, sexually transmitted diseases and even the flu,” Granhold said. “The IT staff had to really start to look at how that information was being processed and try to get this information to the contact tracer as quickly as possible. It was a big task.”

“The next push started when we had to do the vaccinations. There were all types of communications put out in the community saying when the vaccinations would start. When it started, it was like you fell off a cliff,” he said. 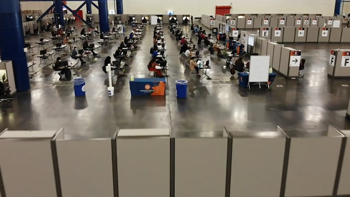 “We also did a six-week FEMA initiative out at NRG Stadium, and we had our own clinics and multi-service centers, and then we rented out another place at Bayou Center to host another mass vaccination site,” Smith said.

Smith said among the challenges they initially faced was the lack of a software with the ability to handle the COVID-19 pandemic.

“It was like building the plane while flying it. Companies were building software as we were experiencing it, so we were challenged with that,” he said. “We had to use multiple software packages to get us to a point where we are somewhat stable, but we went through quite a bit to get there.”

HHD and Harris County Health also had to decide what scheduling system was going to be used on site by the Department of Defense, who came in to help manage the process. Over the course of a week or two, they had to integrate data between each other, Smith said.

“That was a herculean effort done in a small amount of time. There was data being transmitted every day, multiple times of the day, with reports trying to make sure we had the right information on every transmission,” he said.

The experience helped the team grow as a more cohesive unit, the men said.

“The pandemic is one major thing, but we’ve also had to do hurricanes, the flooding and whatnot,” Contreras said. “This was a much larger event, but they’ve already been through it. There was already a tight bond, but it’s even tighter now to where everyone’s almost become your second family. At one point we were seeing each other seven days a week, 12-hours a day. We hardly saw our families for a little while.”

“We didn’t do just IT work. It was whatever had to be done,” Smith said. “I can remember going down to the cars registering people when they had short staff. Not only were we there at 5: 30 a.m. to set up the equipment, if other areas became short, we’re trying to get people in and get them vaccinated. You just knew you could depend on people and that was a big deal.

“You never do technology for the sake of technology,” he said. “For the city and HHD to have been able to vaccinate the number of people, it would not have been done in a timely fashion without it. Technology is essential to the overall ecosystem of vaccine management.”