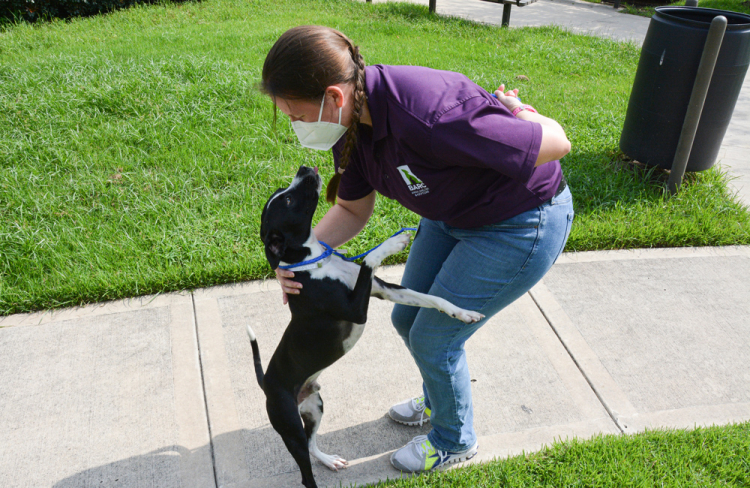 BARC Deputy Shelter Director Nikki Cooper gets a kiss from Nanny, one of the dogs currently being sheltered. The shelter is planning to re-open several of its services at the animal shelter following an outbreak of distemper in July. Photo by Pete Mayes

BARC recently announced it was reopening several services at its animal shelter put on hold following a temporary shutdown when a distemper outbreak was discovered among its dogs at the facility this summer.

Spokesman Cory Stottlemyer said the shelter will be reopening its dog intake, service, BARC wellness clinic and the BARC spay/neuter clinic for dogs as they are trying to return to operating the shelter from a “pre-distemper protocol” status.

“This is kind of a nice metaphor for where we have come from in the nearly eight or so years when ARA took over the shelter. It shows how far BARC has progressed in terms of how quickly we were able to respond,” Stottlemyer said.

“It demonstrates how we were able to deal with the outbreak by getting the areas back open internally and still be able to have adoptions ongoing through that period, based on how we were able to quarantine and identify which areas were open and available,” he said.

“It’s always in our community, but, for whatever reason, it is pretty strong right now in the community,” she said.

Cooper said BARC shifted into its distemper protocol, resulting in the shelter shutting down intake of dogs from the public to lessen the spread. BARC also initiated protocols regarding cleaning and additional personal protective equipment for staff and volunteers.

During the response, Stottlemyer said BARC never closed to the public, nor were their hours of operation changed. It remained open and provided the following services:

Cooper said distemper is an airborne disease for dogs. “It’s much like COVID; we’re all wearing masks and we’re all staying six feet away. … The same is true when dogs get distemper,” she said. “It is a very severe illness for dogs.”

Canine distemper cannot be transmitted to cats, but it can be transmitted from wildlife like racoons and other animals in that category. Cooper said that could explain why they were seeing in the community as dogs were coming in.

“Even though we did shut down intake from owners surrendering dogs, or people turning in stray dogs for a period of time, our animal enforcement officers were still going out into the field responding to calls, picking up stray pets and aggressive dogs. And some of the dogs coming in did have distemper symptoms and they were tested,” she said.

“Some dogs tested positive and some were not. It’s definitely out there in the community and it’s important for our community to maintain those routine wellness checks for their pets.”

Despite the pandemic and the distemper outbreak, Cooper said BARC still conducted pet adoptions for their healthy dogs, though the number was limited to about 30 to 40 animals, as opposed to the 150 pet adoptions they normally have.

“We didn’t want to hold that dog back if it was considered healthy and not exposed to distemper,” Cooper said. “We’d rather get that dog out of the shelter and into its forever home in a safer environment from here because the potential to being exposed was great.”

When the City of Houston’s Administration and Regulatory Affairs began running BARC Animal Shelter from the Houston Health Department several years ago, it set a goal of 100% pet adoption.

Since then, the shelter has now reached a 95% leave release rate for pets.

“We would love to get to that 100% rate, so what we are wanting to do now is reinvent ourselves to get that last 5% out to the community through rescues, adoptions, and transfers to partner shelters across the country,” Cooper said. “Whatever we can do to get that pet out of here alive and into a proper home, that is our goal.”

Cooper said there was an increase in pet adoptions during the beginning of COVID-19.

“In the beginning, people were staying home, especially folks that live alone. And the shelter saw a lot of folks coming in and adopting, fostering, etc.,” she said.

Now they are seeing pets being returned to the shelter. Cooper said she didn’t know if it was due to economic hardships or other factors caused by the pandemic, but added it doesn’t matter.

BARC also received some major accolades. Stottlemyer said Dr. Cynda Crawford, a clinical assistant professor in shelter medicine and director of the Maddie’s Shelter Medicine Program at the University of Florida, described BARC as one of the industry leaders in terms of responding to their distemper outbreak during one of their virtual meetings.

“That is a big highlight for us,” Stottlemyer said.

Cooper said Crawford is helping several shelters across the country deal with distemper outbreaks and is utilizing the protocols BARC put in place as best practices.

“We’ve instituted a color-coding system for housing our dogs,” she said. “Everything in green is considered low risk (no ill pets there; they are healthy, adoptable pets that can go out), everything in pink is where our dogs are showing symptoms of possible upper respiratory infections or other illness, and then our red areas are where we had dogs that tested positive for distemper.”

Cooper said the shelter was mostly pink, red and orange at one point. “We have consolidated, quarantined and isolated those safe pets, and by doing that, we’ve been able them more and more green. At this time, all buildings are green except for two little wards which are red,” she said.

“All of those things that go into taking care of your pet,” she said. “We had vendors who even gave us additional pallets of food, allowing us to stretch our dollar. We’re trying to do those more regularly to try and help the community.”

Cooper said one of the things we want to the community to understand is BARC is open for adoptions.

“If someone is not ready to commit to adopting a pet, we have opportunities for fostering, either short term or a week or two to give the dog a break from a shelter environment or a long term foster, meaning you’re willing to foster until the dog gets adopted,” she said.

“We have all types of positions,” Cooper said. “They can work in our surgery area, help with dog walking, enrichment for dogs and cats… you name, we probably have a spot for it,” she said.