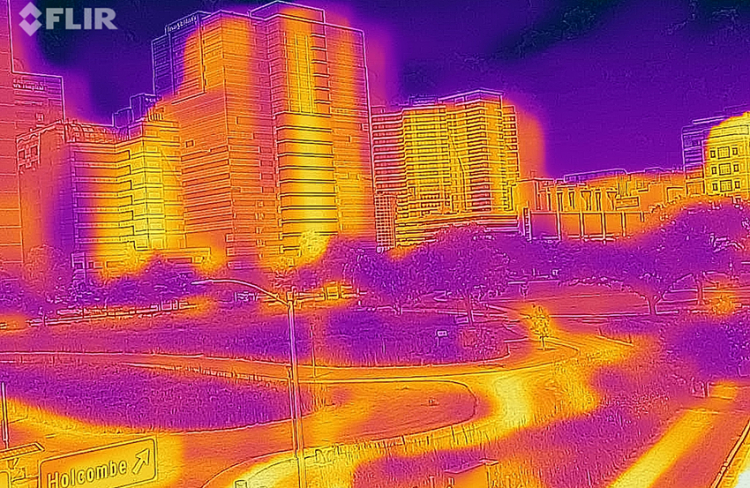 An infrared photo of the Texas Medical Center reveals the impact of rising temperatures in communities across the city of Houston and Harris County. The Nature Conservancy in Texas

By now, no one needs to tell you how hot it is here. Step outside any time of day or night in Houston, and most likely you’ll be met with sweltering hot temperatures, high humidity, or a ridiculously swampy combination of both.

Seeking answers to what that means for area residents, the H3AT team, a collaboration between the City of Houston, Houston Advanced Research Center, Harris County Public Health and The Nature Conservancy in Texas, conducted a heat mapping campaign last August to learn how to reduce the impact of rising temperatures.

It was the largest single-day, community-led heat mapping effort in the United States to date, measuring heat in 32 locations (each covering 10 square miles) across the city’s Complete Communities and underinvested communities in Harris County like East Aldine.

The City of Houston released its “Resilient Houston Strategy and the Climate Impact Assessment” report in late 2020. The findings determined that more buildings and a lack of green space created an “Urban Heat Island” effect, making the Greater Houston Area a hotter place to live.

And it’s predicted to get worse, according to Jaime Gonzalez, Houston Resilient Cities program director, The Nature Conservancy. “The number of days that will feel like 105 degrees Fahrenheit or hotter will climb from around 10 now to around 73 by mid-century,” he said.

“I would also add that climate change brings outsized impacts to populations already working to overcome inequalities around access to health, economic, and community resources. The time to act is now.” 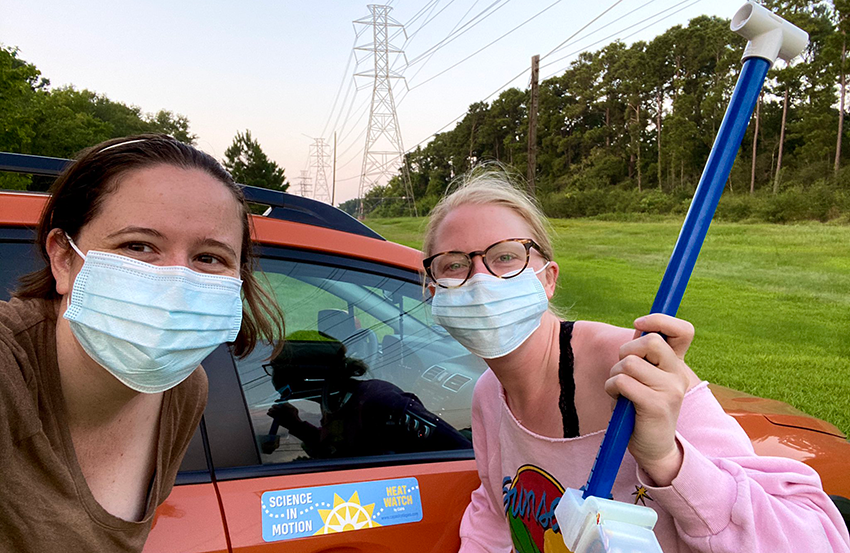 Suzanne Simpson, (left) and Becky Martinez of the Bayou Land Conservancy, take a break from volunteering with the H3AT team as they study the impact of rising temperature in different communities in Houston, such as the Texas Medical Center.

“Once we had the data, our first order of business was to ensure it was free and available to everyone—especially people who were studying the intersections between heat, public health, resilience, equity, and other related fields,” Gonzalez said.

“These interventions run the gamut, from offering better information about UHI to local communities to embedding nature to help beat back the heat – such as cooling bus stops and/or schoolyards but replacing concrete and other heat-absorbing materials and replacing them with trees and other vegetation.”

As terrible as Hurricane Harvey and other flooding events are for the prosperity, health, and resilience of our communities, heat kills and injures more people in our city than flooding, Gonzalez said.

He also noted excessive heat, exacerbated by UHI, can increase incidences of heat stress and heat stroke—particularly in neighborhoods whose residents have less access to air conditioning and/or are working outdoors during the day.

“Summer heat can also impact residents’ desires or abilities to get outside and exercise for their mental and physical well-being,” he explained.  “Temperatures can also intensify formation of ozone and other air chemicals, which can negatively impact people with asthma and other underlining conditions.”

According to Emergency Medical Services Director Dr. David M. Persse, UHI heat-related injuries, such as heat cramps, heat exhaustion and heat strokes, can have life-altering consequences for its victims.

“Getting a heat stroke is devastating. For those who have survived them, they can have permanent brain damage,” he said. “The key to UHI is to get out of the heat, but on a heat island, where do you go? It’s not easy to go outside and catch a cool breeze,” he added.

Persse said UHI effects are particularly hard on low-income elderly residents who live in houses without air conditioning who are unable to get out of their homes, as well as younger residents who work outside or enjoy jogging in Memorial Park at noon when it’s 98 degrees.

He also said younger people are more susceptible to UHI during the early months of summer (May and June), while the elderly residents are during mid-to-late summer months. “It’s like a double hump curve,” he added.

Persse also said city employees who have teams who work outside need to consider altering the work schedule to not do strenuous work outdoors during the hottest part of the day and to also get a head start on keeping their bodies properly hydrated by drinking plenty of water.

“If there are things that can be done indoors, do those instead,” he said. “As for dehydration, if you’re going to pre-hydrate, start 16 hours before. Don’t do it the morning of because its takes time for the water to saturate bones and tissues.”

Persse also said the worst things for people who work outside is to have drinks that stimulate the kidneys and dehydrate you - drinks containing caffeine, alcohol and sugar. Sports drinks are good for replacing electrolytes, but consider diluting them with water, he added.

Tackling Houston’s UHI effect takes a group effort. Gonzalez said groups such as Trees for Houston and the Houston Parks and Recreation Department continue to implement large-scale tree plantings, and the City of Houston has set an ambitious target for planting 4.6 million trees over the next 10 years.

“As a linear forest matures, the shade and evapotranspiration provided by the trees will significantly mitigate the effects of heat island by lowering air and surface temperatures along the street,” Burkes said.

“Each of these projects either maintains or yields an increase in overall tree canopy and vegetation cover within the urban core and has a tremendous impact on reducing temperatures,” Burkes said.

Gonzalez said the work of addressing the heat island effect and making sure that our city is climate ready cannot be done only by the government.

“Solutions will have to be instituted by a dynamic coalition of governments, nonprofit institutions, research groups and universities, health systems (like Harris County Health), civic associations and grassroots organizers.”

Antonio Martinez (left), a volunteer community scientist, takes infrared photos using his iPhone with a FLIR One attachment in the Gulfton neighborhood (right) as part of the H3AT team heat mapping campaign conducted this past August to study the impact of rising temperatures in Houston.

Institutions in the Texas Medical Center, such as Houston Methodist and MD Anderson Cancer Center, and others in the private realm are focusing on green roofs, which cool buildings and absorb and clean water, he said.

“There is never a one-size-fits-all solution; solutions need to be co-created by the communities most likely to see the need for adaptation the most,” he said.