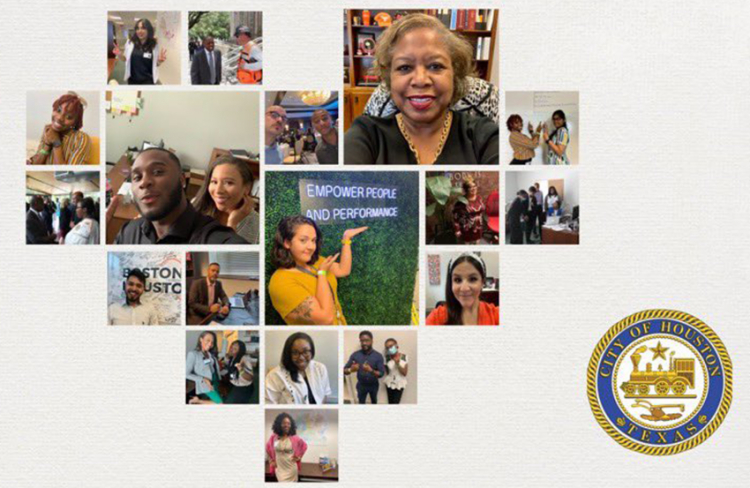 Interns gain valuable and diverse insights working at the City of Houston, from what it takes to make government run to navigating downtown tunnels.

This is the time of year you see them roaming the tunnels, sometimes alone, mostly in packs: fresh faced young people with a look of bewilderment and awe in their eyes.

They’re part of the City of Houston’s internship programs. Many were hired through the Hire Houston Youth program, which gives Houston-area high school and college-aged students more than just a $10-an-hour job working 32 hours a week on their summer break; it also provides behind-the-scene insights into the government operations of the fourth largest city in the country.

Kenady Scott likens her internship with the Office of the Mayor to being in a “movie every day.”

“It’s not like I have a set schedule,” she said. “Sometimes I can be working on something and my boss will come grab me and say, ‘We have an event.’ Because we do work so closely with the mayor, it’s very cool how the things I write for him he says, and I think to myself, ‘I wrote that,’” she said.

Scott is a rising sophomore at Howard University in Washington, D.C., where she is majoring in strategic, legal and media communications. It’s in those moments, she said, she allows herself to really appreciate what her internship is teaching her.

“I give myself a pat on the back and think, ‘Yeah, I wrote that. This is teamwork,’” she said.

The experience has given her a deeper appreciation for how the communications teams work at city hall. “Everybody sees it from upfront, but you actually don’t know what it takes and who works to make it all happen,” Scott said. “I’m lucky, fortunate and appreciative of this opportunity.”

Only Sydnee Jolivette, a sophomore at the University of North Texas, is majoring in broadcast journalism, and for her, the experience is only adding to her skills arsenal.

“I’m learning how to have ‘the production eye,’ how to write the script, how to pick different locations, how to make things look good when it comes together as a final piece, how to interview people, how to be interviewed by people … just how to perform well in a professional environment,” Jolivette said.

“I’ve always wanted to be in front of the camera, but now I’m learning all of the things that happen behind it and that’s interesting me,” she said.

Smith said while his career field does not focus on editing, broadcast or video production, or media work, he still finds communications interesting.

“I’m starting to learn how to edit different projects and other things I most likely would not have learned in the poly sci field,” he said. “It’s interesting for me to learn that will ultimately help me out in the long run.”

Przygoda said she has worked on political campaigns and given speeches, but interning at HTV has shown her a different side of the media.

“I get that part of it and I can talk to groups of people, but I’ve never been on the broadcast side. This is very new to me,” she said. “I’m learning what it’s like recording and editing and learning the technology.”

The interns said working at HTV was intimidating at first. Once they got to know each other, though, things started to click.

Guidry admitted that being the only high school student among college students was initially intimidating, but then found the group welcoming. “It was different because I usually stay to myself, but with this I had to actually talk to them” she explained. “I still keep to myself, but I’m trying to be more comfortable around them.”

“I felt that because at first I didn’t know what I was supposed to do. There was a lot of confusion at first, but then they assigned job positions and roles on what to do,” she said.

Approximately 20 departments and the Mayor’s Office are participating in the internship program.

The program started under former Mayor Annise Parker. Mayor Sylvester Turner expanded it, reaching out to local businesses and non-profit organizations to increase the number of internships from 450 jobs in 2015 to more than 10,000 jobs in 2019.

HTV Director Ted Irving praised the Hire Houston Youth Internship program and the benefits it brings to departments. He also said the give and take between interns and mentors is beneficial.

“The advantage is that we obtain young people eager to learn about government media operations, and how to tell stories using mobile and professional camera technology,” he said.

“We learn several things from our interns,” Irving added. “First, their goals, aspirations, and dreams. Once we have that we can customize their internship. For example, we have an intern who wants to be an entertainment lawyer. With that information, we work to make sure they cover a lot of what is happening in the city’s Legal Department, particularly when it comes to intellectual property and copyright law.”

Hire Houston Youth internships are part of the city’s “Grow Your Own Workforce” initiative. City departments participate by offering internships and co-op opportunities with the intent to build a pipeline for future employees.

This year’s internship program differs from previous years, according to Velma Laws, program coordinator for COH Internship Program.  This year’s HHY participants were hired directly through the city instead of a third-party vendor.

"This allowed us to save money because there was no administration fee, which will allow us to hire more interns and pay more money,” she said. “We are still in a pandemic and we didn’t make our full capacity, but we did well.”

One Grow Your Own Workforce initiative, the Pathways College Internship Program, is used by Houston Water and provides qualified students with practical work experience in the intern’s chosen field of study, along with college course credit. The internships last one semester but are offered throughout the year.

Sarah Robinson, program development lead for Houston Water, said their interns have helped to expand the effectiveness and reach of their programs. The interns provide new ideas, fresh insight, and help with tasks that allow full-time staff to focus on other projects.

“Having interns has also provided us will skillsets and connections outside of the current workings of our team,” she said.

“Ted did his best by taking us on a tour of the tunnels, but it all looks the same,” Jolivette lamented. “One hallway looks the same as the other, there are no pictures. I was on a back alley and there was this one construction guy and I thought, ‘he’s got to know where he’s going … he didn’t.”

“Someone needs to make an app, like Google Maps but for the tunnels,” Przygoda said. “Google Maps need to include that. They do it for the New York subway system.”

“Right?” Jolivette says. “When you search something, it comes up but it’s like aboveground. You could be standing right next to it, but it won’t pop up. If Google Maps would include the tunnels, that would help.”

Smith said he likes to discover new routes to take when he is exploring the tunnels. “It sounds weird, but it’s like an adventure,” he said.

Irving said the best advice he can give aspiring interns is to be “tenacious, respectful.”

“Show up to work, work with fidelity and a sense of urgency,” he said. Always ask questions, always seek to be engaged. Seek and learn new tasks, and be on time every day. The intern who avoids being idle and does not just sit and wait for instructions is the one who gets no hesitation when needing a reference letter post-internship.”

Robinson said she advises students to consider their strengths, interests, and desired areas of improvement when selecting and beginning an internship.

“I would then encourage them to try to build opportunities within the internship that showcases their strengths, allows them to learn more about an area (or areas) of interest, and build up areas of desired improvement,” she said.

“Internships are a unique opportunity to try out new things while refining your skillset and desired career path. I would advise departments to really get to know their interns. Take the time to figure out their interests as well as their perceived strengths. By assigning projects and tasks that best align with these, interns can truly become powerful contributors to your department.”

Laws said she wants the city to be viewed as an employer of choice for residents.

“The city is not an employer of choice because people don’t know about the different opportunities we have,” she said. “It’s not just the opportunities, but how important the services we employ.”