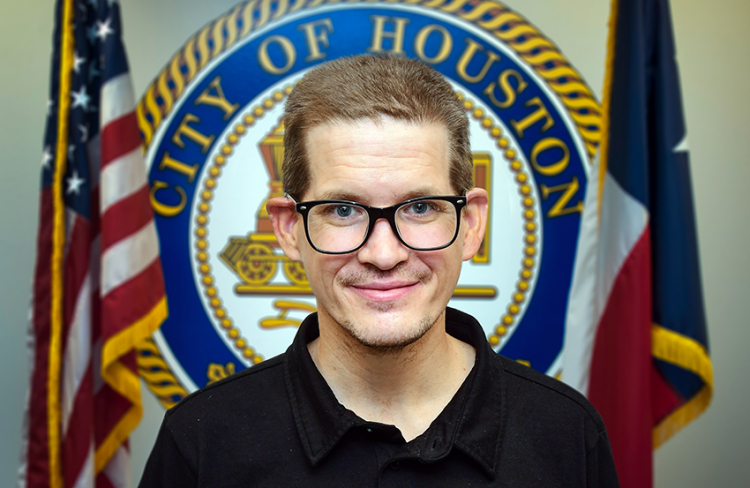 Both at work and away from the job, Cory Worden helps people stay safe during the pandemic.

It’s a round-the-clock task that Worden volunteered for early on when city officials came together to strategize about the city’s response to the pandemic.

“When you look back at this, you know, in five or 10 or 20 years, you'd be much more satisfied knowing that you were able to help people and play an active role in, you know, countering this pandemic,” he said.

Worden, a safety advisor for the Human Resources Department, is no stranger to the field of disease prevention. In 2014, he served as the safety manager for Memorial Hermann Hospital during the Ebola outbreak that year.

Six years later, Worden found himself on the frontlines of another virus outbreak as COVID-19 cases began to spike in Houston. Worden knew his knowledge and experience were much needed as the city began its efforts to open testing sites, implement and evaluate safety plans and measures for city employees, and eventually open COVID-19 vaccination sites.

After a full day of site checks and overseeing disease prevention strategies in the city, Worden said he also volunteers 20 hours a week with national safety organizations to write articles and participate in webinars and podcasts that are pushed out to safety professionals responding to the pandemic.

“We were able to use those forums to get out more information about the virus, Worden said. “How to analyze the hazard and how to put the prevention measures in place and how to communicate those expectations and validate that everything safe.”

His selfless dedication to the city’s pandemic response and volunteer efforts outside of work earned him a Bravo award this May.

“Cory has been and continues to be an invaluable resource for the National Safety Council,” said Sarah Van Huis, a manager of division programs membership for the NSC. “He is the sitting vice-chair of the Government and Public Sector Division and has presented numerous times for that division in addition to other arms of the council.”

Worden said he first began volunteering with the NSC in 2015 and has served as the secretary, vice chair, and chairperson for the community safety division before serving in his current volunteer role.

“I began as the newsletter chair and programs chair for the Energy Corridor Section where I wrote the newsletter and articles, and wrote and presented educational sessions and webinars, and coordinated other educational events,” Worden said.

Worden now serves as the HPS administrator over publications organizing journal articles, developing a new podcast and multiple webinars about workplace safety, workplace violence prevention and healthcare. He has presented at conferences and serves on ASSP’s Communities of Practice National Advisory Board.

For the past six years, Worden has also volunteered with the Association for Occupational Health Professionals in Healthcare. He has served as treasurer, secretary, vice president, and president for the Southwest Chapter. In 2017, he was elected to serve as AOHP’s Region 2 Director.

“Cory is the consummate safety professional who values mission accomplishment and brings value to any organization he is a part of,” said Bobby Hawkins, a safety supervisor for HR.

Worden said he appreciates his Bravo recognition but believes the united work of people across the city to combat the pandemic is what stands out to him.

“You know, one of the most important things about what's happened here, in the last year…from the mayor to the department director, you know, to the individual nurses and to the people at testing sites, everybody giving vaccines and the fire department, and everybody that is involved in the police department…everybody had that same diligence,” he said. “Making sure that we're keeping things as safe as possible.”