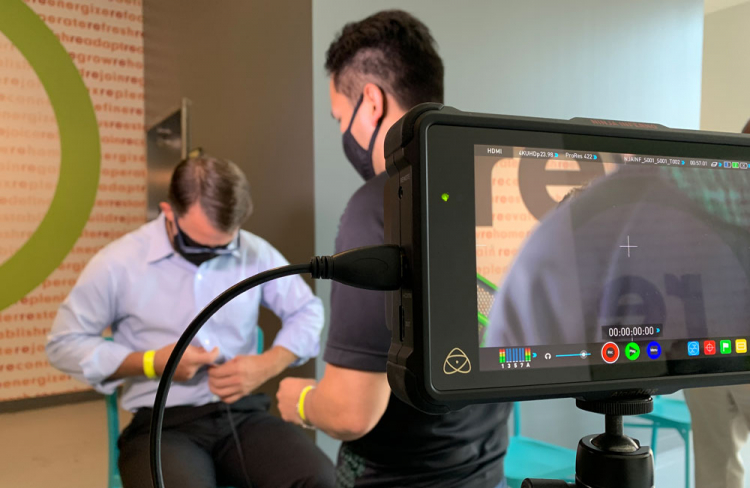 Houston Housing and Community Director Tom McCasland adjusts his microphone as he prepares to be interviewed for “A Message From…,” an online series created by HTV Director Ted Irving. The series for City of Houston employees delves into city departments and their work. Photo courtesy of Houston Television

Ted Irving said he has been pleasantly surprised learning about the 25 departments that are part of the City of Houston since becoming the director of Houston Television in 2018. What he learned led him to create a new online series that he hopes will educate employees about the departments and tell their stories.

“A Message From …” is an online series that Irving writes, edits and produces to highlight councilmembers, city department and divisions, what their initiatives mean to city employees, and how the employees can support those initiatives.

Irving said his other reason for creating the series is more pragmatic.

“It’s a way for me to keep my video shooting, editing and production skills up,” he acknowledged. “It’s part of my training philosophy for HTV: When you’re in a leadership position, you must know the tools, be able to use the tools, and show your staff how to use them. I shoot these stories for the secondary reason for training.”

The online series can be found on the City of Houston’s SharePoint drive. Each video is nearly three minutes and shows department officials explaining their department’s functions. Each is also a stand-alone piece with its own style, character and look.

“They all have the same open and close graphic, but that’s it. I want each to be unique and not cookie cutter,” Irving said.

Irving said he will compile the content into a 30-minute program to be shown on the HTV municipal channel at the end of the year.

Since its debut in January, the show gained nearly 5,000 viewers and more than 1,000 subscribers on its YouTube Channel. Current videos feature Housing and Community Development, Administration and Regulatory Affairs, the Department of Neighborhoods, the Mayor’s Office of Trade and International Affairs, and Houston City Council At-Large Position 1.

“With all the various and different departments and people I’ve met, a lot of my own personal reaction has been, ‘Wow! I didn’t know you all existed,’ or ‘Wow, I didn’t know you all did that.’ And then, through discussions with other city employees, I found they have the same response I have,” Irving said. 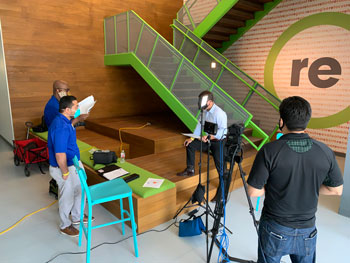 “For example, there is the Mayor’s Office of Innovation. I wanted to know what exactly they do,” he said. “And then you look at ARA. There are so many divisions under them. And this is important. The city is huge, and you can’t know about every department, which is why these particular types of videos try to fill that space.”

“There are so many stories to tell. While the city does have social media, we don’t have a citywide blitz marketing campaign where we just hammer the public with the great things we’re doing,” Irving said. “As a city, we really have to get out front and create compelling, creative, informative stories well before any outside media so that the public is aware of what we’re doing.”

Before working on “A Message From …,” Irving said he initially wanted to work with the Parks and Recreation Department to create 30-second videos highlighting “every single park in the city.”

Irving also said he plans to do segments featuring city council members and explaining the difference between the district and at-large positions.

“We’re helping push that message out to the public. It’s about who they are, what do they do and what are their top initiatives. And of course, what can city employees do to help the council with their initiatives,” he said.

Irving said he wants the show to encourage people to embrace learning about what goes on in city departments and divisions from a positive perspective.

“I want them to really know about the initiatives and to really take these stories and use them to spark even their own word-of-mouth campaigns and spread the ‘good news’ about what these various departments are doing,” he said.

He added that he wants city employees to think of themselves as another voice, a “verbal channel” to help spread what’s good about the city.