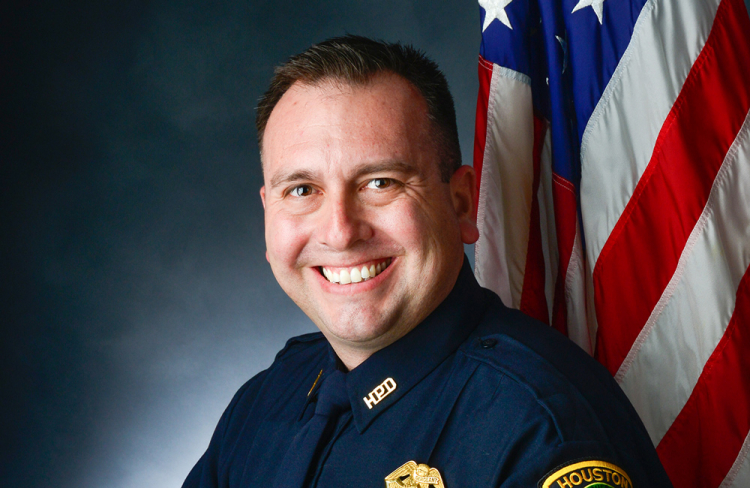 The City of Houston remembered a Houston Police Officer who lost his life in the line of duty.

Sgt. Sean Rios was shot and killed Nov. 9 near the North Freeway Service Road at Stuebner Airline. He was assigned to the Airport Hobby Division.

“Our people are resilient, and this family is resilient,” Houston Police Chief Art Acevedo told reporters prior to the funeral services. “The outpouring of support for the Rios family is amazing. Today we will celebrate a life well lived.”

Rios, 47, was a former United States Marine Corp veteran and 25-year law enforcement veteran who joined the Houston Police Department in 1995 and graduated Academy Class #165. He leaves behind four children — ages 17, 14, 12 and 9 — as well as his parents, a brother, and two cousins who are HPD detectives.

During his tenure with the department, he was assigned to the Southwest, Central, Eastside and Southeast divisions.

“Sean set an example that when he saw a threat, he took it on instead of saying it’s not my job. Let us honor his life by living his life of service in the same way he did.”

Chaplain Vincent Johnson, HPD said there was no doubt in his mind that Rios was proud to be a Houston Police Officer, adding he always had fellow officer’s back. He also asked everyone to continue to pray for the City of Houston and all fellow emergency responders.

“Sgt. Sean Rios has made it to the other side. I can see him being greeted by other brothers and sisters in blue … but most importantly, he was greeted and accepted by our Lord and Savior. He is the presence of the Lord, in perfect peace,” he said.

“We come to celebrate a true hero of the city of Houston. He was a hero to 2.3 million Houstonians. This city is grateful,” he said.

Members of Rios’ Academy Class #165 also attended the funeral ceremony, where he was remembered as a cadet who exhibited their class motto, “Motivated, Dedicated and Full of Pride.”

“He was a Marine. He was a leader. His entire life has been in the dedication of service to others,” fellow academy classmate Senior Police Officer Ken Nealy said at the service.

“During our time in the department, we all go in different directions. Every time I saw him, he was proud of his children. We are proud to say he was not only our classmate and fellow officer, but he was also our friend. He will be with us forever,” he said.

Harris said he first met Rios in 2007 and described him as someone who loved to talk politics, history, random music lyrics, or “anything to stir up the day.”

“He pronounced names uniquely. When he liked you, he’d say things twice like ‘that Tony, man, great guy … great guy. What a character,’” Harris said.