Groceries, sporting goods, craft supplies, dinner and even margaritas. Today you can get just about anything through curbside pickup. Even a new family pet.

In April, the BARC Animal Shelter and Adoption Facility developed a new adoption procedure that minimizes contact to ensure the safety of their staff, residents, and animals in their care.

“It was incredibly important that we keep our staff as healthy as possible, not only for their sake, obviously, but also because the risk of an outbreak that would render us incapable of caring for the animals on site. So we moved to a split-shift approach,” said Lynette Bodmer, BARC’s adoptions coordinator.

“Adopters don't need an appointment or anything like that,” Bodmer said. “They just arrive here at the shelter and they park in one of our numbered parking spaces, and then they are able to check in online at that point.”

Potential adopters can see a list of animals with specifics on BARC’s website. If they have questions, customer service staff can look up the animal’s details and provide answers. Then they call BARC’s customer service staff and this opens the conversation to determine if there is a specific animal in the shelter they are interested in, or what kind of animal the resident is interested in — size, breed and other traits.

“The next step is that we do encourage is a Zoom meeting meet-and-greet, to virtually connect to their new furry friend and to help answer more questions,” said Bodmer.

At that point, the potential adopter is connected with BARC animal care staff who work with the animals every day and are familiar with them.

The adopter can speak with the customer service team or animal care staff to gather information, as well as see the animal and observe how it behaves and interacts with BARC staff. That can give the adopter a good feel for the animal’s personality.

Adopters who choose an animal are connected with customer service to complete the adoption paperwork and process the adoption fee.

“Then the animal will be brought out front to the adopter and loaded into their vehicle, and they're on their way,” Bodmer said.

According to Bodmer, some adopters are wary at first because they want to meet the animal in person.

“We're really encouraging people to keep an open mind and try it out because I think they're going to be really pleasantly surprised, as so many of our adopters have been so far,” she said.

Meeting the animals virtually gives people a feel for the animal because it is in a familiar environment with familiar people. BARC’s fosters are also able to use Zoom for animal meet-and-greets.

“What the adopter is able to see is the animal in a home environment behaving as it normally would at home, which is what they can expect to see when they take the animal to their home, versus meeting the animal in an unknown environment,” said Bodmer. “Meeting a stranger can be a little overwhelming. When they meet a potential adopter, they may not show their best side of themselves because they're intimidated. With a Zoom meeting, people are getting to see the animal’s true full personality, which is amazing.”

“I just completed a virtual meeting myself for a foster. The adopters really wanted to meet in person. I said, ‘Let's try the Zoom meeting and see what you think,’” said Bodmer. “And after that, they were really excited because they got to see everything — his whole personality. And it's actually been really successful.” 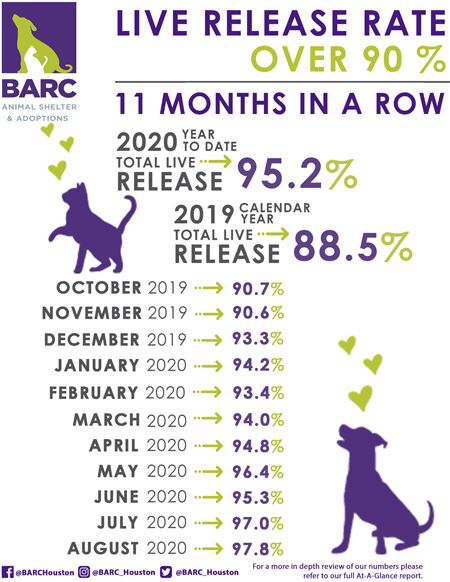 The length of time animals are kept in the kennel has also decreased dramatically.

“It's fairly rare at this point that we have animals that are in the kennel longer than 20 days,” Bodmer said.

That follows a growing trend. Pet adoptions are on the rise across the U.S.

“So our live release rate has skyrocketed as well. And we are reaching numbers that we have never seen before here at the shelter,” Bodmer said.

August is traditionally when BARC’s live release rate is the lowest. This year it was 97.8%. That’s higher than was seen during their normal peak months of January and February, when the live release rate was 94.2%.

“When this all started with COVID-19, we were we were afraid that with everything happening that we would slow down the progress we had made,” said Bodmer. “And instead, we're reaching numbers we never thought we'd see.”

“Our fosters will continue to embrace that long, long after we are able to meet in person again, even if it's just doing a Zoom beforehand,” Bodmer said. “For our cat fosters, it's been amazing because, again, if you take the cat somewhere to meet the adopters, he's going to be terrified and you’re not going to get a good picture of who he is.”

“It's the unexpected silver lining of all of this,” she said.

Adoption fees right now are discounted for everyone, but city employees get a discount on adoption fees and wellness center fees.

Adoptions for employees are just $20.

The Wellness Center is temporarily closed to visitors but is scheduled to reopen for curbside services in October.

Adopting a Pet at BARC

Follow the steps below to adopt a pet that is currently in the shelter.