Lynn Henson harnesses power of nature to build up city 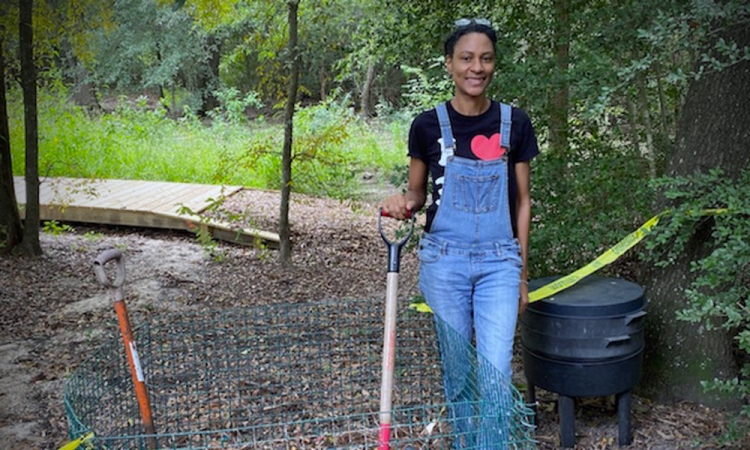 “This may sound strange but I like dirt,” said Lynn Henson, a planning manager for the Planning Department’s community and regional planning division.

An avid volunteer with environmental and community development nonprofits, Henson sees dirt as a building block in life.

“That’s how you can grow healthy vegetables and the whole cycle of life,” Henson said of her composting volunteer activities with the Houston Arboretum and Nature Center.

A nonprofit organization that provides environment education and serves a sanctuary to native plants and animals, the Arboretum is where Henson spent many Saturdays churning weeds and grass cuttings into compost.

“It was hard work,” said Henson, who started volunteering at the Arboretum after signing up for a composting class offered through the city’s Green Building Resource Center.

Henson’s interest in gardening and growing food stems from her passion for planning as a profession.

“How to lay out a city and have airflow between buildings, make sure there was sunlight, plenty of areas for trees, grass, plants and flowers — to me those things tie together,” Henson said.

It’s a connection that Henson has worked hard to sustain through her role for the city and volunteerism in the community. Her efforts merited a Bravo award in July.

Along with the Arboretum, Henson has volunteered with Houston Urban Gardeners, a nonprofit organization that promotes growing and eating local produce through informative meetings and events.

“I started just as a participant in the meetings,” Henson said. “Then it grew into helping find speakers to come to the meetings and to help with their website.”

“I helped with posting articles and things on Facebook and social media in order to identify gardening classes,” Henson said.

“Lynn has been a tremendous asset to our Houston Urban Gardener group,” said Donna Yanowski, a HUG board member. “She is always pleasant and eager to help. She most definitely deserves the Bravo Award.”

Henson has also volunteered her gardening and composting expertise with the Last Organic Outpost, an agricultural-based sustainability organization in the Fifth Ward that has added an additional site located in the Third Ward.

“The idea was that you know, people from the community would come and help garden and then they can take fresh vegetables,” she said.

Henson’s community-driven outlook sparked her interest in volunteering for the Northern Third Ward Implementation Project, a nonprofit that helps with strategic planning of community development in Houston’s Third Ward.

“Homeownership is declining or has declined over the past 10 to 20 years,” Henson said.

“I focused on trying to secure homeownership by educating people about home exemptions, finding those that did not have homestead exemptions on their property and through the committee, educating them about the possibility of getting the homestead exemption because that can keep down the cost of taxes increasing the possibility of people being able to afford to stay in their homes.”

Henson has carried her passion for nature and community development into her role for the city.

“I have a love for architecture, development and business related activities,” said Henson, who embarked on her career with the city more than 20 years ago.

For more than 10 years, Henson has been involved with city initiatives that have increased community development and affordable housing in blighted neighborhoods.

“One of the larger projects that I'm working on right now is the Mayor's Complete Communities program,” said Henson, who serves as the program manager. “From the Planning Department side, we do outreach to the community, we develop plans, we look at statistics.”

Launched in 2017, the program aims to strengthen under resourced neighborhoods to ensure equal access to services and amenities. Pilot projects were initially launched in Acres Homes, Third Ward, Near Northside, Gulfton and Second Ward.

“It's a multi-part project where we develop plans that identify what communities want and need,” Henson said. “And then we work with the Mayor's Office of Complete Communities to help implement those projects.”

Through her work for the city and volunteerism in the community, Henson has assisted in securing nearly $1 million in grant funding for city and nonprofit community development initiatives since 2004.

“I think it all stems from just wanting to help people in general,” Henson said. “My want with the planning is about helping people, helping communities, helping neighborhoods, and with the nutrition, the gardening, composting, it's about wanting to get the information to people, sharing that information.”

“Every now and then I might drive through different neighborhoods just to kind of see the progress,” she said. “It’s just a great feeling.”