The Houston Public Library has a new front door

In early March, the Houston Public Library recognized they would need to close their doors to protect the health and safety of staff and customers. A pandemic was approaching, and it was time to pivot to virtual programming. Libraries were closed to in-person services, but that didn’t mean that the library didn’t have programing for patrons. HPL employees brainstormed ideas and sprang into action.

Laura Covington, HPL deputy assistant director of customer experience, sent out a call for “HPL’s Got Talent” sources. Library employees across the department responded and self-identified their many talents.

“We have a wide variety of talent – natural storytellers, felt board artists, musicians who play the ukulele/guitar, staff who speak Chinese, Russian, Spanish and more,” said Mary Wagoner, a youth services advocate for HPL. “One staff member is a Chinese Opera Singer and speaks in sign language. We have staff willing to be silly to add an infusion of fun.” 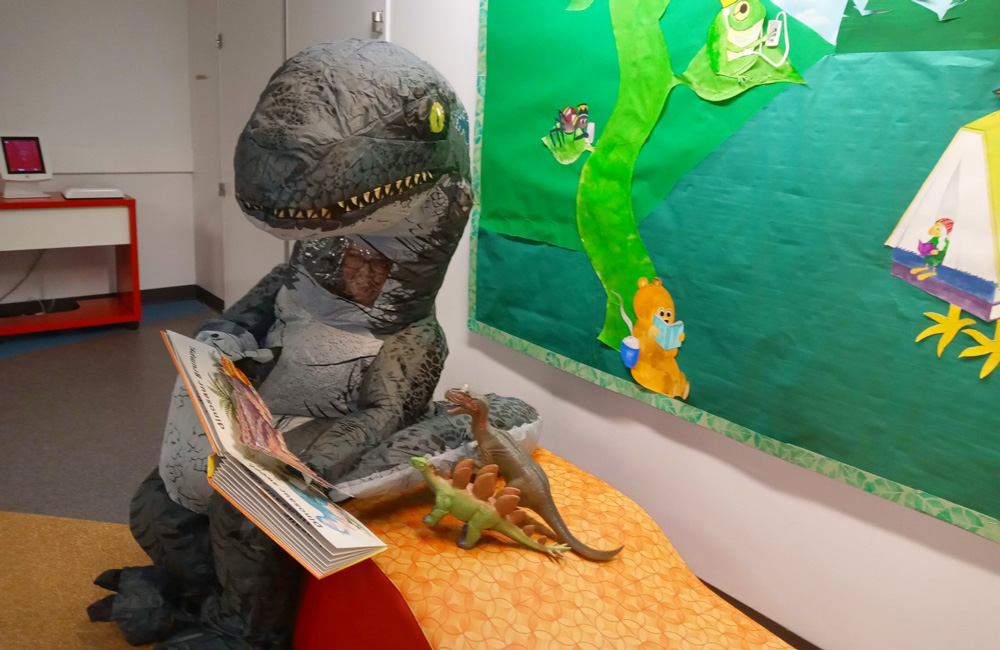 It takes a whole team to do one virtual program. There are HPL employees who are consulting, writing scripts, editing, directing, reviewing and branding the videos and more that work behind the camera that you don’t see.

“They are doing a fantastic job of making sure the videos look professional and that everything goes smoothly behind the scenes,” said Norola Morgan, a senior library service specialist at the Central library. “That is what’s tremendous about working at the library. You get so many people with so many skill sets coming together. And not everybody necessarily has a library degree, but people come from a variety of backgrounds and were able to contribute to something really wonderful because of the synergy and creativity of it all,” she said.

“We’re still planning our story times, but rather than presenting to the public live, we film them and they’re uploaded to social media so people can have access to them that way. We are still focused on the public, but in a different way.”

Producing the videos has been a learning process. To start, HPL employees were given a basic set of instructions on how to use a cellphone to record the video. Savannah Dorsett, a senior library services specialist who manages the fiction collection at the Central library, described how staff learned to improvise tripods and backdrops.

“At first, we had to MacGyver it. One of my coworkers recorded it on his cell phone. We rubber banded the phone to a tripod," Dorsett said. "It was very much like those movies in the 40s and we were like ‘we’re going to put on a show."

Since then, HPL has invested in cameras, lights and microphones. And library branch employees can come to the Central Library and have their staff shoot the video.

“It has been an interesting journey,” said Morgan. “Initially, we just basically sat down with a book and started reading it to the audience."

“But as we have gone along, we have learned a bit more. Good lighting is important. Sound is important, and so is making sure we’re in a quiet space where there’s not a lot of distractions.”

Creativity has progressed as well. Now HPL staff is incorporating masks, costumes and props. Some story time videos are in other languages such as Chinese and Spanish, and some incorporate library staff who sing or play instruments. HPL is leveraging the unique skills of their employees to introduce a variety of topics. Pre-COVID, many of the libraries participated in an afterschool zone program where kids worked on STEM, craft and other projects that combine learning and having fun at the same time.

In addition to the story time videos, the library began creating STEM, craft and other types of videos to increase access to traditional library programming when in-person services aren’t available.

Kristin McWilliams is a youth manager for the southwest region who leads the library’s STEM video team.

“I review all the STEM videos that the staff are making. It’s cool because I’ve gotten to work with people I normally wouldn’t work with because we’re not in the same locations,” she said. “And it’s so fun. It feels good to be creating something that is hopefully helpful to other people.”

“And we’re learning along with the kids as we are doing the videos. At first, we thought we didn’t need a script for STEM. And then we realized that it really helps and makes the video a lot more interesting to watch,” McWilliams said.

Transitioning those projects to virtual has been a journey too. In-person, the presenter gets instant feedback from the kids’ reactions and questions.

“We’ve had to pay attention to how it looks on film, what the audience is seeing,” McWilliams said. “Whereas in person, you don’t think about those things.

“Quite a few of the videos are aimed more at parents or caregivers – activities they can do with their child. Kids can ask the parent questions and the videos walk the parent through the activity.”

The STEM team tries to choose projects that use common household items that kids are more likely to have at home and feature projects like engineering design challenges. The team plans to bring in some more nature projects in the future.

In addition to the videos, HPL has started creating podcasts. Chapter One podcasts are released weekly on Tuesdays for tweens and Thursdays for teens. These podcasts feature librarians reading the first chapter of an age-appropriate book to get them “hooked” on the story.

“I’m trying to give everybody the full experience of actually coming to the library,” Morgan said.

And having the videos available on demand via social media means that patrons can access them anytime. STEM and craft videos that just feature hands can be voiced over in other languages, making them accessible to as many people as possible.

“I’m hoping that parents are watching these videos with their kids and their picking up ideas for ways that they can also share books, crafts and projects with their kids,” Morgan said. “I hope that it gives them the confidence to try different things when they’re doing story times with their kids. They can be as free or creative as they to be. Just enjoy it as much as they can and make it fun for the child.”

Every summer, HPL hosts the J.P. McGovern Summer Reading program where several thousand children participate by reading for at least 20 minutes a day. The program, funded by grants coordinated by the Houston Public Library Foundation, also arranges for various performances at libraries across the city. Performances included those from Houston Grand Opera, Viva Art, Andyroo and the Andyrooniverse, Arts Alive, Alley Theatre and more. 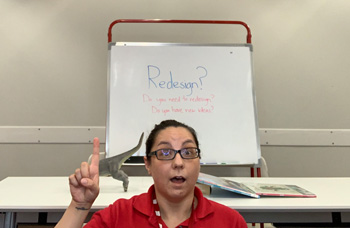 “This year, the outside performers were asked to submit audition videos,” Wagoner said. “These videos included things like creative drama and role-playing, balloon art and face painting, puppetry, multicultural storytelling, science, animals, music and more. Alley Theatre produced 21 videos for tweens, teens and adults featuring a variety of information about producing plays and acting – from casting and auditions to foley art, the art of creating sound effects.”

The Summer Reading Program is extended to Aug. 31. Kids have the chance to earn books by reading each day for 20 minutes. By signing up, they earn one book and for every 10 days of reading 20 minutes or more, kids earn one book if they log it. They can earn up to four books for the summer. And if they have been reading all summer without logging anything, they can go back and log all their past reading.

HPL is still doing reference requests via telephone and email, and services like readers advisory, where members from the reader advisory team send out a custom recommended book list based on a patron’s likes and interests. Readers looking for what to read next, can fill out an online form and get recommendations from trusted professionals. 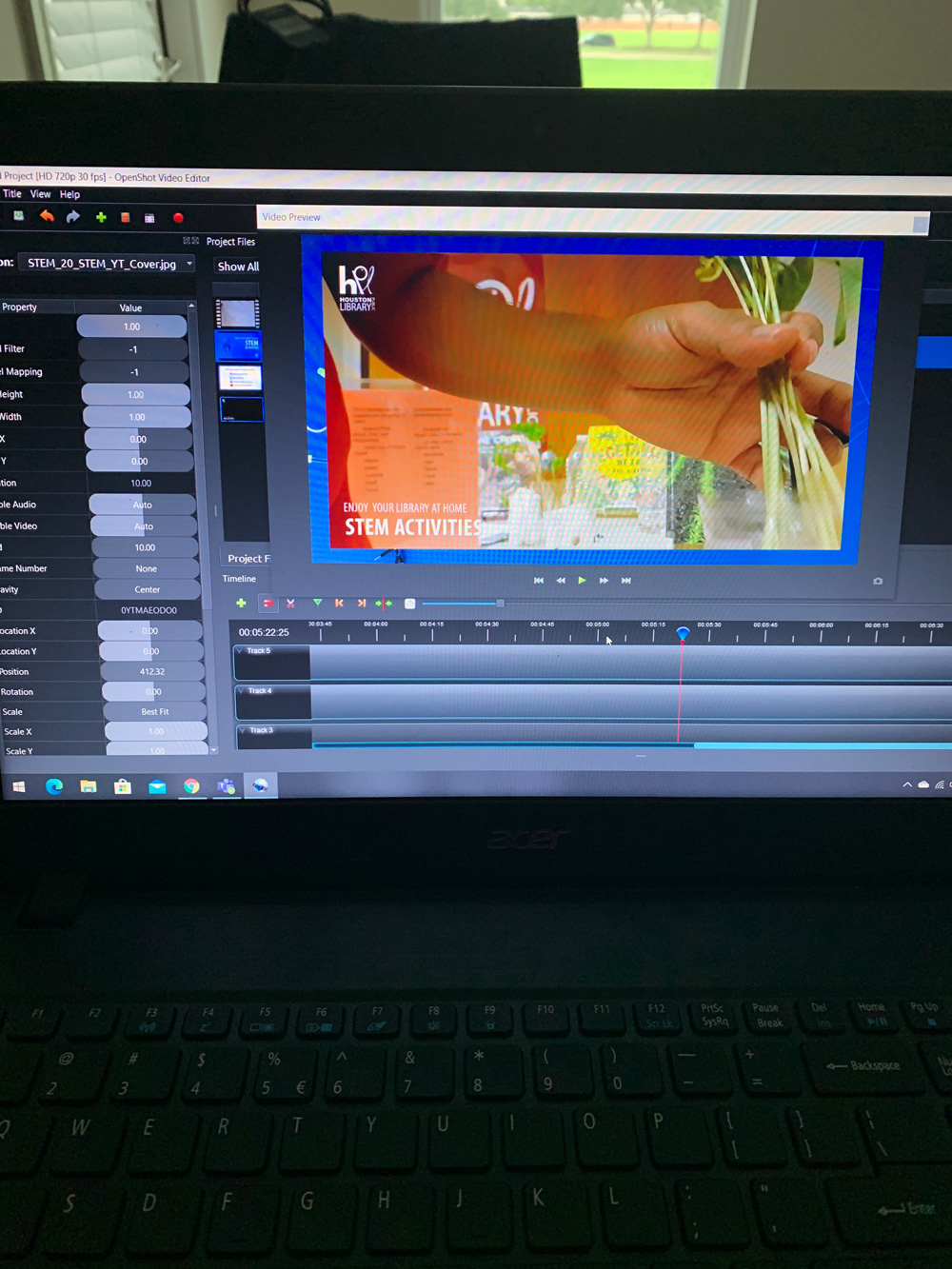 “I already have a background with readers advisory services. I was like, ‘I’ll do that but virtually,’” Dorsett said. “We came up with the name Book Chat and started creating the videos. This was an intentional effort to try and get something for adults.”

And book clubs are expanding into the virtual universe as well.

Starting with a small group of regular book club members, Dorsett has hosted a few book meetings via Zoom and is now ready to promote the virtual book club meetings online.

“I host a classic literature book club, and we hadn’t met for four months. We finally starting meeting again in August. And that’s been really great seeing everyone again, and we’ve gotten fantastic feedback for that,” she said.

“One of my book club ladies is quarantining in San Antonio to help with her grandkids and she’s able to participate from there. That’s really cool.”

Future virtual programming includes transitioning Public Poetry to be on Zoom and figuring out a way to virtually do Gulf Coast Reads, a program where library patrons across Houston read the same book. In addition, HPL is launching livestream filmmaker discussions. Patrons can stream the film with their library card, then participate in a livestream discussion with the filmmaker. The inaugural livestream features “Chisholm ’72,” a documentary about the late Shirley Chisholm.

“I would love to take Book Chats and expand it into a podcast featuring next reads and talking about books that are coming out,” said Dorsett.

Even after HPL can open their doors again to patrons, virtual programming will continue to be a part of the services offered.

“My book club ladies are already asking, ‘Can we keep a Zoom option, even when the building is open?’” said Dorsett. “And I would love to continue doing all this virtual stuff, probably not as often one we’re open to the public, but I don’t think we can put that genie back in the bottle.”

“What our programming department has done with the transition to virtual events and programs has been really amazing.”

“This is a new front door to the library,” said Wagoner.

HPL offers over 150 digital resources from language assistance to skills tests. These resources link people to the world.

HPL to Go – Curbside service for contactless pick up of library books available at 15 locations. All returned books are quarantined for four days for the safety of customers and staff.

Living English – FREE English lessons designed to help you live, work, and play here in Houston. Pick your class, register for a live lesson, or watch videos on demand, and let’s talk!

Book a Librarian – Zoom meeting with a librarian for assistance with small business resources, nonprofit resources, e-book or audiobook assistance and more.

Learning Link – Alief and Houston ISD students have access to HPL resources and books with their student ID and PIN with no fines.

HPL offers many free resources for parents and kids.