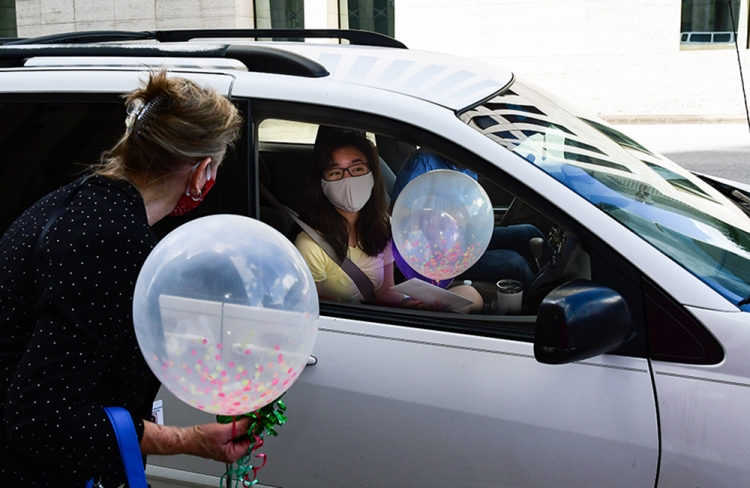 PSRW Essay contests winners were greeted by Paula McHam from Cigna and contest coordinator, Elise Marrion in a drive through ceremony. David Smith

Public Service Recognition Week celebrates city, county, state and federal government employees and the important jobs they do. Since Congress authorized it in 1985, PSRW has honored public servants during the first week of each May.

But this year was different: As May neared, COVID-19 cases were climbing and would inevitably interfere with PSRW. Organizers with HR Communications needed a new approach to the celebration. In-person ceremonies and large events were postponed, and in some cases canceled. Still, it was important to find a way to celebrate public service.

What follows are familiar events with a twist, revamped on the fly and incorporated a mix of online participation, social distancing, and other strategies to make the 2020 PSRW not only possible but a success story in the midst of the pandemic.

The PSRW poster contest adapted an online submission form and extended deadline. That resulted in an increased number of submissions. Young relatives of city employees illustrated themselves working for the city as veterinarians, firefighters, police officers, public health investigators and more. The winning submissions revealed a wide range of creativity and talent while promoting careers in public service. The winners each received a prize packet, and their posters were framed and ready to hang in a place of honor.

This citywide contest invited students from the metro area to write essays about a public service job of their choosing. The five winners received scholarships funded by Cigna. The annual ceremony took place as a socially distanced drive-though awards presentation.

This is the city’s commendation of good works by employees. The annual event encourages departments to nominate outstanding employees who also volunteer in their communities. Due to COVID-19, the deadline was extended for nominations and the City Council recognition is postponed.

Learn more about the 2020 winners

The Mayor’s Service Awards honors employees with more than 30 years of service. The annual event demonstrates the mayor’s appreciation for these longtime employees’ dedication to public service. Honorees and their guest are treated to a luncheon and called on stage for a photo with the Mayor to commemorate their service.

The 2020 Mayor’s Service Awards was scheduled for March, then postponed to June and then November. Finally, in light of the rising COVID-19 threat, a final decision was made to hold it in in early 2021 instead, combining it with a celebration for the 2021 honorees.

The annual tournament is postponed to early December 2020. Look for information to be released in the coming months.

See photos from the 2019 tournament.