Written by
Rate this item
(2 votes)

Nick Anderson is drawing a series of coronavirus-related cartoons for the City of Houston.

In a city workforce of more than 21,000, dozens of employees are bound to have hidden creative talents and artistic pursuits. But it’s not every day that you could bump into a nationally syndicated, Pulitzer Prize-winning editorial cartoonist at the watercooler.

Nick Anderson, who joined the Mayor’s Office of Government Affairs as a senior communications specialist in 2019, does far more than doodle in the margins of his meeting notes. His cartoons offer a witty perspective on critical current affairs, and have been published in Newsweek, the New York Times, Washington Post, USA Today and Chicago Tribune.

Anderson, a native of Toledo, Ohio, began drawing cartoons for his high school newspaper. He continued taking pen to paper drawing for his college newspaper while earning a bachelor’s degree in political science from Ohio State University. While working for the Louisville Courier-Journal, Anderson earned the 2005 Pulitzer Prize for editorial cartoons, “for his unusual graphic style that produced extraordinarily thoughtful and powerful messages,” the Pulitzer Prize website states. That year, Anderson’s cartoons won the judges’ favor over Garry Trudeau, the famed creator of “Doonesbury,” nominated in the same category. Houstonians may recognize his work from his tenure as an editorial cartoonist for the Houston Chronicle from 2006-2017.

Anderson took a moment to answer a few questions about his career path, his current role, his inspiration and approach to cartooning for the city.

Q: As a keen observer and satirist of political theater over the last three decades, how does it feel to be on the other side, working within a governmental agency?

Anderson: It’s definitely an interesting experience. It gives me firsthand experience that informs my opinions. As a liberal, I am not philosophically opposed to government, so if anything, it has strengthened my belief that there are some things government needs to do, and does well.

I started my job at the beginning of the 2019 Texas legislative session. I spent those five months interacting directly with Mayor Turner in daily meetings with his executive staff, updating him on the status of legislation and getting instruction on how our department needed to handle legislative strategies.

The key takeaway from sitting in those meetings was how complex the job is. Every day seemed to involve a department director updating the mayor on a current crisis or new problem. This is a big city with a lot of challenges. The mayor often has to make decisions quickly and with imperfect information. It’s a much tougher job than I had imagined, especially Mayor Turner’s term, which has involved a major hurricane and a pandemic.

Q: The phrase, “Pulitzer Prize-winning editorial cartoonist” likely precedes your name in many professional introductions. Now 15 years later, how has that achievement shaped your career or influenced your creative output?

Anderson: It’s been a doubled-edged sword. When times were better in the newspaper industry, it was a pretty big deal to have won a Pulitzer. Of course, it still is. But when the Houston Chronicle decided it no longer needed a cartoonist, I felt like a relic of the past.

My resume had only one job as my previous experience: editorial cartoonist. Do you know how many full-time jobs there are for a political cartoonist in Texas? Zero. I knew there were many other things I could do, but convincing an employer to give me a shot was futile, at least for a time.

Fortunately, I can also write pretty well. I had to reinvent myself as a visual and written communications professional. I scraped by with a collection of freelance clients for 18 months before the planets aligned and I landed the gig in Mayor Turner’s Office of Government Relations.

Q: What emotions, connections and actions do you hope to evoke with your current coronavirus cartoon series? 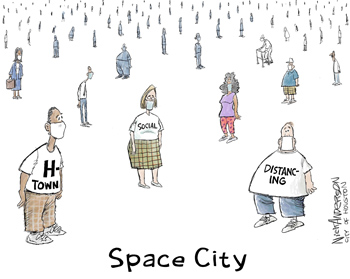 Anderson: I hope to compel people to take this virus seriously, and to convince some of them to practice social distancing and wear masks. Yes, we need to get the economy moving again, but we can do it and keep the virus from getting out of control by taking some minor precautions. We live in a strange political climate where some consider it tyranny if you ask them to wear a mask.

Countries with more civic cooperation, like Taiwan, have dramatically lower transmission of the virus, and deaths, thanks to these measures.

My son has Type 1 diabetes and Graves’ Disease, which is an autoimmune disorder, so I take this pretty personally. I hope to keep him as insulated as possible. I also hope that if he contracts COVID, it will be at a time when hospitals aren’t overwhelmed. Getting someone with his underlying medical conditions the proper care can make all the difference.

Q: What role does humor play in making sense of these unprecedented times and adjusting to the new normal?

Anderson: It's pretty much the same as always: providing a stress reliever and a way to deliver a message with a spoonful of sugar instead of "take your medicine" approach.

Q: Do you have a favorite cartoon among your COVID-19 series? If so, please describe your inspiration for the cartoon.

Anderson: My favorite was putting the "Houston is Inspired" mural onto a mask. I think it made for a very striking image.

Q: As an established political cartoonist, you create opinion-based cartoons. How does your approach and mindset change to draw more informational and educational cartoons for the City?

When I created the cartoons for the City, I was far more open to using ideas from my colleagues in GR or comms. Most of the finished cartoons were still mine, but I might take someone else's idea or adapt one of my sketches based on input from others.

When I'm working as a political cartoonist, I'm expressing my own message. When I work as a communications professional, I am working to express someone else's message, or a consensus message, so I'm far more comfortable taking a team approach.

Q: What is one thing you wish people knew about being a political cartoonist — or what is one misconception that you would like to correct? 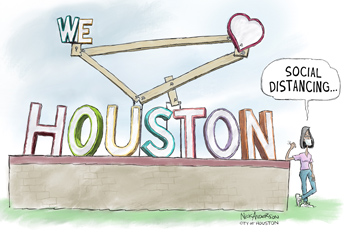 Anderson: People often accuse me of "bias." This is the most absurd criticism and reflects people's ignorance of what a political cartoonist does. It's opinion. These cartoons appear on opinion pages. They are not supposed to be balanced or even-handed.

Q: In your role as a senior communications specialist for the Office of Government Relations, what other projects and responsibilities do you have in addition to your cartoons?
Anderson: I handle a lot of the correspondence and advocacy letters to other government entities. It's kind of like leading a double life. I have written a handful of letters to Speaker Pelosi and Majority Leader McConnell lately advocating for rent and mortgage assistance in the wake of coronavirus, advocating for federal aid to cities and states, and other aspects of the federal CARES Act legislation. So in my day job, I'm part of the system. By night, I'm doing a few cartoons a week poking holes in the system.

During a Texas legislative session, I'm extremely busy writing one letter after another opposing or supporting legislation. We are already gearing up for the 2021 Texas Legislature by reviewing legislative proposals from relevant City of Houston departments.

Because our department often works with state and local officials, I have to recuse myself from commenting on state and local issues with my political cartoons. It's an understandable trade off.

I also create and edit a weekly Government Relations email newsletter. This newsletter didn't exist before last year. We created it to help promote the work of our department, but it has evolved into something that often promotes the work of the Mayor's Office, and the subscriber list keeps growing.

Q: Once the pandemic calms down, will you continue to create cartoons for the City of Houston?

See more of Nick Anderson’s city cartoons on the Government Relations site and his political cartoons on his Facebook page.