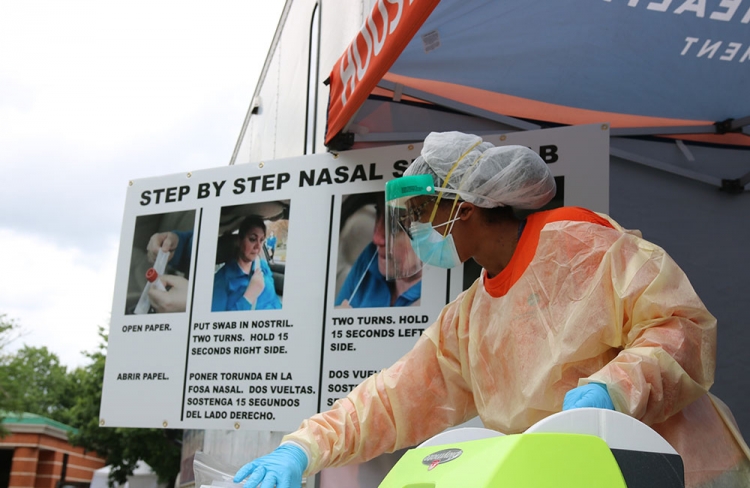 At the forefront of the city’s response to the coronavirus, safety personnel ensure safe procedures at testing sites in southwest and northwest Houston. Photo courtesy of Houston Health Department

Each night when Cory Worden returns home from work, he removes his shoes and leaves them outside, puts his clothes in the washer, wipes down his keys and cell phone with alcohol, and then takes a shower before greeting his wife and children. It’s a tedious process, but one he’s grown accustomed to over the past few months to ensure the health and safety of his family.

“I clean everything I can't put in the wash,” said Worden, a safety advisor for the city’s Human Resources Department.

Worden, who is assigned to the Health Department, has been involved with the city’s frontline efforts to combat the ongoing coronavirus pandemic since early March.

With a background in disease prevention and having served as the safety manager for Memorial Hermann during the 2014 Ebola outbreak, Worden volunteered to help with the city’s coronavirus safety response in any way he could.

Worden began working with the city’s incident and later joined various task forces led by the Office of Emergency Management. He was involved with working on response plans, flowcharts, algorithms validating personal protection equipment, checking on vendors and procurement and inspecting products.

When the city decided to open a public drive-thru coronavirus in March, Worden and his fellow safety team members volunteered to help deploy and set up the site along with HHD and OEM.

“The first thing we did was a hazard analysis of everything from hazardous waste to hazardous materials,” Worden said of the process to open the Butler Stadium testing site located in southwest Houston. “Then we have traffic and vehicle safety because we have cars coming through.”

The Butler drive-thru coronavirus testing site opened in early March, with a second site opening in April at Delmar stadium in northwest Houston. Each site is free and open to the public, with the capability to test up to 500 people per day.

“Since the beginning of the COVID-19 pandemic, the Safety division has been actively engaged in supporting the city’s response to combat the spread of coronavirus,” said Stefan Malhotra, the division’s deputy assistant director.

“The level of commitment that the safety reps bring to the table is phenomenal,” said Malhotra of the HR safety personnel who have been providing critical hazard analysis, operational guidance, and life-saving observations throughout the entirety of operations at Delmar and Butler stadiums. “We asked for volunteers to begin with to see who would go out to the sites. People stepped up.”

“It’s a whole-hearted effort,” Malhotra said. “It takes everybody to do this. It’s not just one group of folks operation on their own.”

“On top of this we do have the rest of our responsibilities,” he said. “We’re still going to our city locations and doing our inspections and audits and engagement at those sites.”

For Worden, it’s just another day on the job.

Worden is thankful for the efforts of the safety team.

“This is what we’re doing to make the situation better because for the pandemic to get better, first we have to know how many people are infected, and we have to know what the parameters are for treatment” he said. “We’re getting that data, we’re helping people get tested, and enabling people to get treatment.”