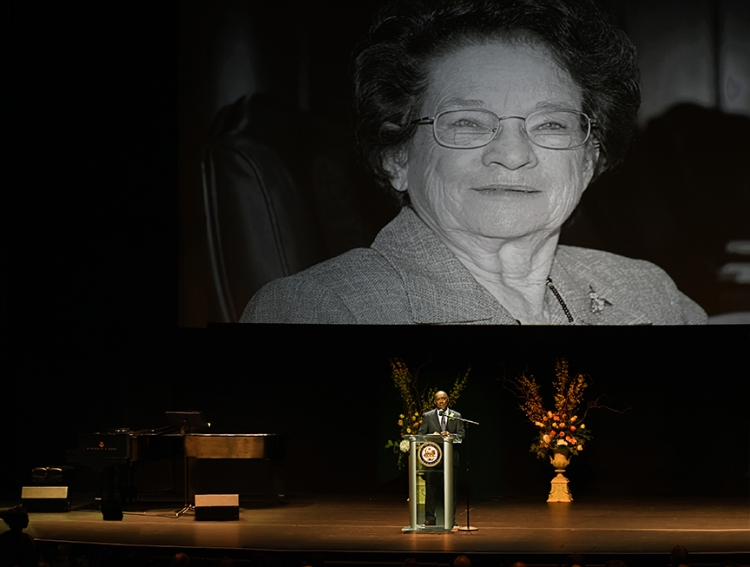 Anna Russell made history as the longest-tenured City of Houston employee to date — nearly seven decades — from the time she took a job as a clerk at age 18 in 1950 until she died at age 88 on Feb. 3. She served as city secretary since 1972 through the administrations of 13 mayors. And at a Feb. 11 memorial service at the Hobby Center for the Performing Arts, she remained larger than life. Here, her image seems to look over Mayor Sylvester Turner’s shoulder as he eulogizes her. Photo by David Smith

Remembering Anna Russell, Houston’s longest-serving employee, and how she ruled the roost.

As Houston’s city secretary since 1972, Anna Russell held together the sometimes fractious city council meetings across generations of council members, mayoral administrations, city officials and residents. And on Feb. 11 she brought many of them back together.

This time it was anything but fractious. Hundreds from city government — active and alumni alike — gathered again to celebrate Russell’s life, her love for her city, devotion to her job, her ramrod-straight ethics, her commitment to an endearing old-school way of doing things, her historic endurance, an irreproachable sense of time, and her lesser-known wry humor.

And, even though it was a celebration, they came back to mourn a little too.

At “A Tribute to Anna,” the memorial service to remember, celebrate and honor her, two former colleagues chatted as they entered the Hobby Center for Performing Arts auditorium.

“It took Anna to reunite us,” said the other as they both laughed and hugged.

Russell never retired. With 68 years of service, she was the longest-serving city employee in Houston’s history. Though many city employees now have a badge I.D. number with six digits, Russell’s was 45.

In 1950, Russell took a job with the city as a clerk when she was just 18. She never worked for another employer. Mayor Louie Welch appointed her city secretary in 1972.

At “A Tribute to Anna,” Mayor Sylvester Turner called the memorial service bittersweet.

“To be very candid, I just never thought that this day would come,” he said, calling Russell a “gem.”

Reflecting on Russell’s inclination to deflect the spotlight, Turner said she would probably question why all the fuss.

“I’m just going to say, Anna, this is one time we’re not going to follow your instructions,” Turner said. “She deserves the tribute and so much more…. As tough as she appeared on the outside, a very gentle spirit. And she was the quintessential employee of the City of Houston.

“She defied labels. She was a warrior and a remarkable woman. Quite frankly, she was a superwoman.

“She was a constant. Anna was the same. Treated everyone the same. Wouldn’t talk about a previous mayor.  . . .  When it comes to integrity, no one had more integrity; when it comes to dedication and commitment to the City of Houston, no one demonstrated that more.”

Finally, Turner officially dedicated the day in memory of Russell, but with a humorous twist: As he said he was proud to “proclaim this day Feb. 11, 2020, as Anna Russell Day,” a recording of her firm, familiar voice drew laughter as it came through the sound system over his saying, “Thank you, your time has expired. Thank you.”

In his eulogy, the Rev. Bill Cole, associate pastor or worship and praise at Sagemont Church, where Russell attended, added praise for her endurance and integrity:

“I want to say, for 68 years, a single mother with three little girls, drove down to the City of Houston downtown every day — we talked about this a little bit in the back — the same route probably every day, working in the office as a clerk to begin, not looking for another place, a greener pasture, a shinier new thing. She found work. She found a way to take care of her family, these three (her daughters). And then she found another family.

“I’m so grateful today that she kept her hand to the plow. She did not look left, she did not look right. She did not consider Republican or Democrat. She just considered the great city of Houston as her place of service. …She was there to do the proper and the right thing with integrity.”

Among other current and former city officials to speak of their affection and admiration, former Councilwoman and friend for many years, Sue Lovell, recalled Russell’s strict ethics, humanity and humor.

“She had a sign in her office that said: ‘Your lack of preparation doesn’t create an emergency for me.’”

“She loved to hear gossip, but she did not gossip. She was a vault,” Lovell said. “It was a one-way transaction. She took deposits but no withdrawals allowed.”

And there was a caring side to Russell. Lovell said, recalling how Russell often had to cope with rude people.

A regular at Council meetings that were open for residents’ comments, President Joseph Charles of Royalty, sometimes clashed with Russell. Lovell said they might even exchange “dagger looks.”

“But when he didn’t show up for a week or two, she started calling around to see if he was OK,” Lovell recalled.

“And she did not take sick days. She said they were her savings account,” Lovell said. “I doubt the city could pay that bill.”