For Reginald Holt, every day offers a chance to rebuild your life.

“A lot of times we call it second chances, but what a person really needs is just another chance to get it right,” said Holt, a senior public health investigator for the city’s Health Department.

Holt, who works as a service linkage worker and case manager for HHD’s Community Re-entry Program, assists individuals recently released from jail or prison in getting a fresh start.

Launched in 2008, the program successfully assists and support ex-offenders in their transition to re-enter society and become productive, contributing members of community.

“A lot of the time they just need some motivation to do what they need to do,” said Holt, who offers guidance to program participants and connects them with an array of social and health resources.

“Especially with the ones who come into the program that may have been gone for quite some time.”

Program clients are drawn to Holt, because at one time, he too needed support and guidance.

“Being that I’ve been where they are, when I talk about it, it gives me a little weight,” said Holt, who was released from prison in 2001.

Holt, who has spent more than decade volunteering to help individuals who society often overlooks, was honored with a Bravo award in May for his service both on the job and in the community.

“I believe what makes Mr. Holt exceptional is his devotion to care for people,” said James L. Bell, a program manager for HHD.

Holt’s path to the city started when he started volunteering for HHD’s re-entry program in 2008. 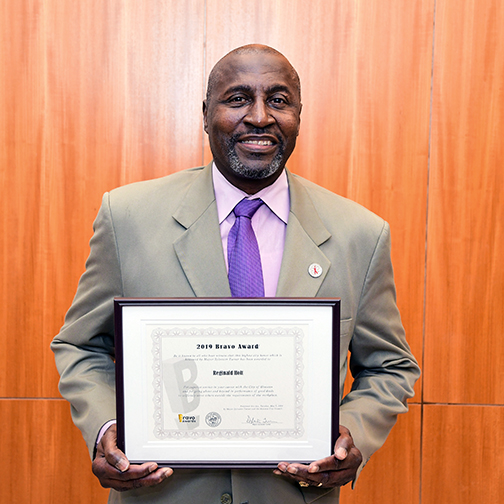 In 2010, he volunteered for a city tuberculosis task force before signing up in 2014 to volunteer with St. John United Methodist Church’s “Bread of Life Path to Freedom” program. The program aims to break the prison cycle for those in and coming out of prison.

Each Wednesday, Holt serves as a liaison for the church peer group, helping with their services and activities, while offering guidance about resources.

“I get a lot of gratitude out of knowing that somebody is having success in their transition,” Holt said of how he helps returning citizens.

In 2016, he was hired by the city, joining the Community Re-Entry Network Program team as a full-time employee.

“Anytime I can see somebody make some progress, when I can see somebody achieving goals that we set, if I can assist them in reaching that goal, I do what I can for them” said Holt, who spend his mornings doing outreach for the city at local jails and prisons and his afternoons building a plan for program participants.

“Once we get them motivated and get them to thinking in a way that’s conducive to recovery, because were all recovering from something, we want to try and keep them on track with that,” he said.

Common goals for returning citizens include getting a job and securing stable housing, which can be difficult for individuals with a criminal background.

“Returning citizens are just like everyone else,” Holt said. “They have basic needs they need to take care of. A lot of times they get the door shut on them based on the past and not the present.”

Holt hopes his story inspires others to keep an open mind when it comes to people looking to shed the stigma of being incarcerated.

“Many of them realize their mistake; they’ve served their time,” Holt said. “Give them the opportunity to prove to society and to themselves that they are worthy of another chance.”

Bell is a firm believer in the work Holt does each day for the city and the community.

“Mr. Holt is a strong advocate for so many who feel at times that they have no voice and have no hope,” Bell said. “He is that ray of hope, the ray of sunshine to eyes that have seen nothing but darkness for many, many years.”

“I just do the work and help who ever I can help,” Holt said.