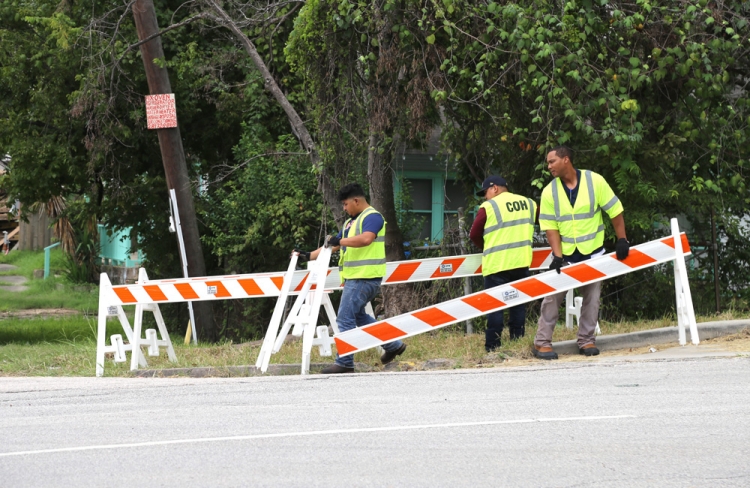 Tropical Depression Imelda inundated Houston and Southeast Texas on Sept. 19 with an unexpected severity, but in the days before bad weather struck, Houston Public Works crews were proactively protecting public safety by deploying hundreds of barricades to potential highwater locations.

Without those barriers in place, highwater could potentially cause an inestimable loss of life and property.

“It’s an important part of weather emergency preparation that most people never think about,” Brown said. “It’s a proactive measure to supply police and fire departments the equipment they need to keep people out of those dangerous areas.”

Public Works collaborates with the National Weather Service, the Office of Emergency Management and other safety agencies to pinpoint the areas in the greatest need of barricades, but sometimes the weather has a mind of its own, Brown said.

“We take every Tier 1 weather event seriously; you never know what might happen,” Brown said. “Here at 2200 Patterson, we try to be ready for anything. I slept on a cot in my office on Sept. 17 with my phone at my side. We have a roster of employees scheduled work 12-hour shifts.We have showers, a generator that runs the entire building, we have meals ready to eat, charcoal, propane ready to go.”

Despite the city’s efforts to safeguard the streets, Brown said some drivers willfully ignore safety signs and barricades.

“You can block off an intersection, you can put out barricades and warning signs, but some people just don’t follow them,” Brown said. “People will drive over cones, drive through barricades and go straight into the high water we warned them about. If we didn’t put out barricades, who knows how many cars would flood or how many people we could lose.”

In addition to weather emergencies, Brown’s crews set up barricades for special events that require street lane closures including the Chevron Houston Marathon, parades, street festivals and political events like the recent visit from the President Donald Trump.