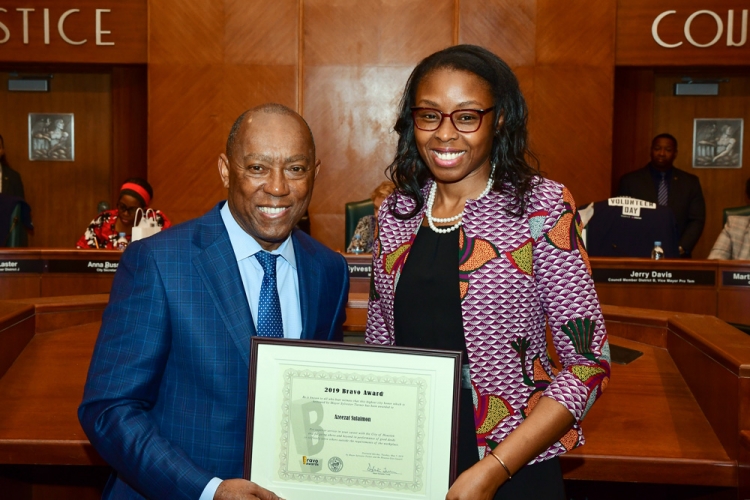 When it comes to giving back, Azeezat Sulaimon believes time is worth more than money. That’s why she started volunteering in graduate school.

“I didn’t have any money,” said Sulaimon, a financial analyst for the city’s Finance Department. “But then I realized you could give your time so I started doing it.”

For six years, Sulaimon served as a mentor for Big Brothers Big Sisters in Illinois. The nationwide program matches adult volunteers with children who need mentoring.

So when Sulaimon moved from Illinois to Houston three years ago, she welcomed the opportunity to mentor a young girl in need. 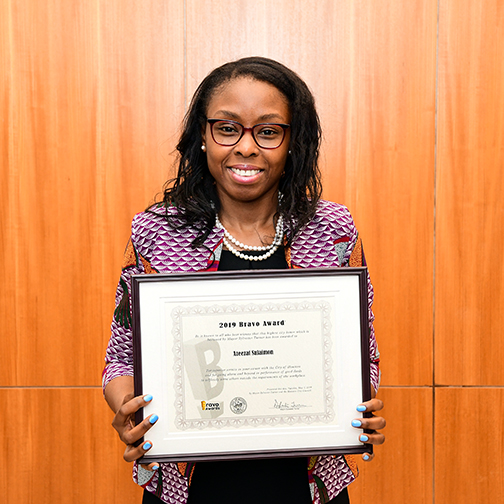 “On a weekly basis, I check on her to see how she is doing with school,” said Sulaimon of the girl she has mentored for the past two years. “If she has any issues she wants to talk about.”

Sulaimon’s serving spirit earned her a Bravo this past May. But mentoring isn’t the only way she gives back.

The committee is part of Masjid-ul-Mumineen, a nonprofit organization that provides networking, cultural development and religious fellowship to Houston’s Nigerian community.

“There’s so many different things we do across the year,” she said.  “It makes me feel good just knowing outside of just giving back, I’m giving my time.’

“We are so blessed to have Azeezat as a contributing member of our committee,” said Sola Ahmed Oyewuwo, co-founder of the Mumineen Youth Steering Committee. “

I look forward to continuing to impact the community with her.”

Since 2017, Sulaimon has lent her financial skills to Celeradfrica. The nonprofit organization aims to reduce radiology costs among patients in Ghana, Africa.

“We look at statistics at what we’re doing and how to reduce costs,” said Sulaimon of analyzing and designing financial models for Celerad.

Thanks to her volunteer efforts, Celerad has reduced patient wait times from 72 to less than six hours.

“Most of the people I do stuff for, I don’t even know them,” Sulaimon said. “but that’s what I like best. I’m not doing it because I want something back. I’m doing because I see someone in need.”

Sulaimon also puts her serving spirit to work for the city.

“Over the past year and a half, Azeezat has displayed excellent customer service as the lead on collecting, reviewing and analyzing over 73,000 Hurricane Harvey time sheets for all city departments,” said Gloria Moreno, assistant director for Finance’s financial reporting and operations division.

“She went above and beyond to meet with over one thousand city employees one on one at their various work site location in the process of getting all 73,000 Harvey related hours amended and approved.” Moreno said.

In April, Sulaimon presented at the 2019 Texas Emergency Management Conference in San Antonio.

She shared her knowledge about FEMA’s disaster recovery labor policies with more than 100 attendees.

“It’s a little more than a financial aspect,” Sulaimon said. “It’s more of making sure that someone is benefitting from some information that I know.”