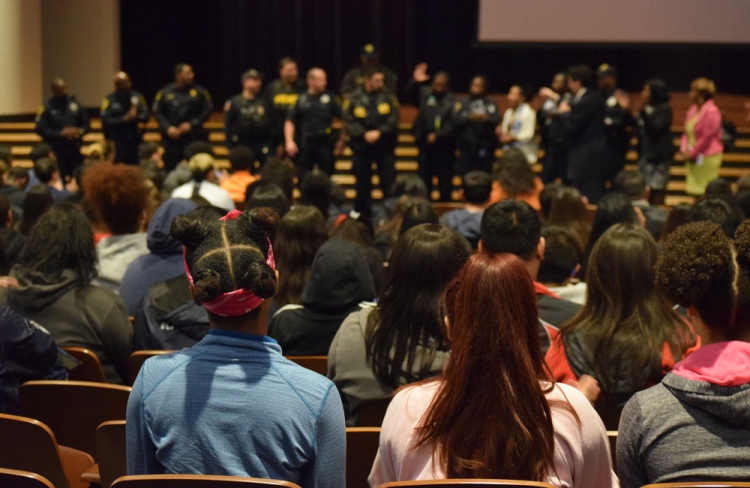 The moment those flashing red and blue lights appear behind your vehicle, a change comes over your body. The majority of drivers know the feeling – a tightness in your throat, a churning in your stomach and a quickening of your pulse. Even the most routine traffic stops can elicit a strong physical and emotional response.

For some drivers, a traffic stop is only a momentary annoyance, a regrettable disruption in the day. But for others, unexpected encounters with the police can evoke deep-seated feelings of fear and mistrust. That stress is also shared by police officers who never know whether drivers are armed or how they might react. Ongoing reports of police shootings nationwide only amplify those feelings, creating more tension and widening the disconnect between law enforcement and the community.

Knowledge is the key to dispelling those fears, said Noel Pinnock, who oversees My Brothers’ Keeper-Houston, a program managed by the Houston Health Department. MBK Houston is partnering with the Houston Police Department, Teen and Police Service Academy, the Human Resources Learning and Development Center and numerous community and governmental entities to launch a new education initiative called the Peacekeepers Movement to promote peace and safety between residents and law enforcement.

“This training is extremely timely,” Pinnock said. “You only have to listen to the news to know that we are in a national crisis. Shootings like the recent one in Baytown could have been avoided. We want this training to give peace of mind to both peace officers and citizens. We want to prevent injury, loss of life and loss of confidence in law enforcement.”

The Peacekeepers Movement was formed in response to the Community Safety Education Act, a state law that went into effect in September 2018, requiring all Texas peace officers, all Texas high school graduates and everyone who completes a driver education course to learn traffic stop safety. The curriculum was developed by Dr. Everette B. Penn, director of the TAPS Academy and professor of criminology at the University of Houston – Clear Lake. Courses are co-taught by Penn and HPD Public Affairs Officer Treva Mott.

“When the Community Safety Education Act went into effect, there was no funding or guidance on how to implement the training requirements,” Pinnock said. “The City of Houston and our partners have created the blueprint and will serve as a model for other cities across the state.” Pinnock said.

With a goal to educate at least 50,000 people by September 2020, the Peacekeepers team has been busy rolling out the program. So far, the training has been mandatory for an estimated 5,300 HPD Officers and all Houston Health Department employees.  The training was also available and strongly recommended to Human Resources employees. At press time, the Peacekeepers website reported 75 completed trainings including 3,839 civilians and 3,714 officers. The Peacekeepers team is working with city departments to offer future employee training opportunities at the Learning Development Center.

The program recently received a grant from the governor’s office to expand course offerings to other cities. Penn and Mott have trained members of the Missouri City Police Department, students at some Houston Independent School District high schools. They have also been invited to teach classes in Prairie View, Arlington and El Paso.

“This is not just another work training you have to complete to check off a box,” Penn said. “This course is relevant to your everyday life – every time you get behind the wheel. We want to be totally transparent. The curriculum we teach to citizens is exactly the same as the training we give to peace officers. We’re leveling the playing field so everybody knows exactly what they should do, and so we can hold each other accountable.”

The course is a refresher and a reinforcement of good driving habits, but also offers some surprising insight that many drivers might not know including rules about consent searches, carrying concealed handguns and a drivers’ right to call 9-1-1 to verify an officer’s identity. Course attendees also learn the right time and appropriate way to submit a compliment or file a complaint about a police officer.

“Our hope is that learning something as basic as traffic stop safety will prompt constructive conversations, and provide a foundation to build stronger, safer more respectful relationships between peace officers and citizens in the future,” Penn said.

Responsibilities of the driver

Responsibilities of the officer: