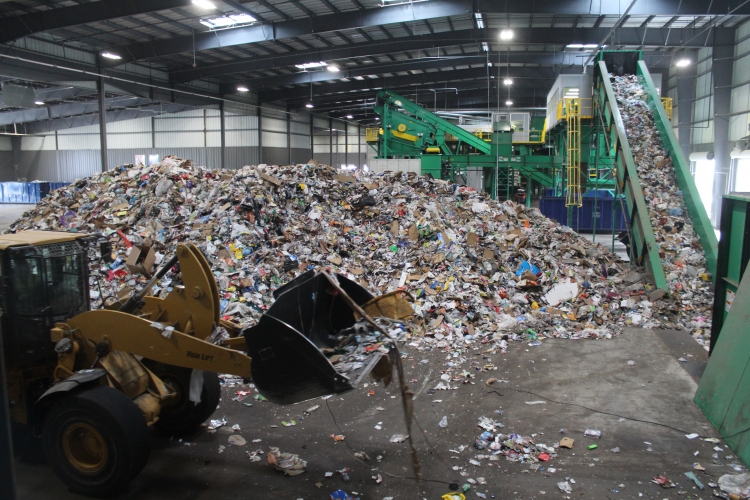 A new 118,000-square-foot recycling materials recovery facility in northeast Houston can hold and sort up to 145,000 tons of recyclables per year. Photo courtesy of Mayor’s Office of Communications

When the city’s Solid Waste Management Department and FCC Environmental Services celebrated the opening of a state-of-the-art recycling center on April 4, headlines across the city heralded the highly anticipated return of curbside glass recycling — and local recyclers rejoiced.

The convenience and ease of curbside glass recycling offers an immediate, tangible benefit to Houstonians, but the partnership between the City of Houston and FCC has the potential to create a long-term impact on the community by saving taxpayer money, creating jobs and opportunities for economic development and environmental education.

Why was curbside glass recycling discontinued?

Over the last couple years, municipalities across the nation have faced a recycling crisis exacerbated by skyrocketing waste processing costs. Recyclable material commodity values tanked after China introduced stringent regulations on imports. At the time, more than one- third of American recyclable waste was sold and shipped to China.

In short, China’s environmental ban meant that nobody wanted to buy our recycled waste and there was simply no place for it to go. Consequently, cities that once earned revenue through recycling programs were now paying escalating processing rates. Houston was not immune.

“When I first came to the City of Houston, people were paying us to recycle. All of the sudden we were faced with the fact that we were going to have to pay,” said Mayor Sylvester Turner.

The City of Houston collects approximately 65,000 tons of recyclable waste per year, and was paying up to $92 /per ton under the previous contract with Waste Management, said Solid Waste Management Director Harry Hayes.

“We felt the ripple effect from China’s regulations,” Hayes said. “It was a drastic financial shock to the City of Houston.”

As part of the contract, FCC built a $23 million, 118,000 square foot materials recovery facility (MRF) at 9172 Ley Road. Located in northeast Houston in District B, the MRF is the largest of its kind in Texas and has the capacity to hold 145,000 tons of recyclables per year. It also features the latest technology in glass screens, optical sorters, extra-wide screens for fiber and climate conditioning for line employees. FCC also committed to keep the MRF’s operations current and update the facility as new technologies develop.

According to the Solid Waste Management Department, the city’s partnership with FCC will help reduce the cost of Houston’s recycling program. Instead of paying $92 per ton, FCC’s contract rate is $19 per ton. FCC’s rate is nearly 80 percent less than our previous contract with Waste Management, and is less than what the city pays to dump garbage at the landfills.

In short, it is now cheaper to recycle than to dump garbage in the landfill, and FCC is obligated to keep recycling prices at or below landfill disposal fees for the duration of the contract.

The new contract also protects the city from paying more when the recycling market fluctuates. When the price of recyclables goes up, the city will share in the profits, SWMD stated.

The partnership between the city and FCC not only reduces recycling costs and diverts materials from landfills, the project has created opportunity where none existed, Hayes said. 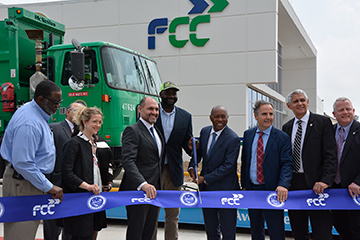 Although it was not required, FCC made MWBE participation a priority. One hundred percent of design work and 33 percent of construction was contracted to companies owned by minorities, women and small businesses.

The project also generated 100 new jobs, and has the potential to add more positions in the future, Hayes said. Mayor Turner and Vice Mayor Pro-Tem Jerry Davis, who represents District B, applauded FCC for hiring more than 50 percent “second-chance opportunity” candidates, or workers who were previously incarcerated or homeless.

“To have a facility in a district like District B, where more than 100 jobs are being made available to people who may have otherwise had a difficult time finding jobs, and then to focus on people who are deserving of a second chance," Mayor Turner said. "And for a business company that focuses on recycling things, is also is now helping to recycle the human spirit, by giving people a second chance, it just doesn’t get any better than that,” Mayor Turner said.

“In this city, we don’t just talk about diversity, we talk about inclusion, and that’s what this project represents as well,” he said.

Davis said FCC’s decision to locate the state-of-the-art facility in District B sends a clear message to residents that their community is worthy of investment.

“When we think about the economic impact of this project in our area, we see the pride that our constituents have by driving by and understanding that FCC made an investment in the community,” Davis said. “(FCC) took the time to go to the neighborhoods, have workshops and job training — we don’t normally get that around here.

“For over 50 percent of the employees, this is a second-chance opportunity. I don’t know how many of those people are from District B, but I’m going to say there’s going to be a few people there. For that, I want to say thank you (to FCC) for your time and your efforts and your investment,” Davis said.

In addition to building the MRF in only 8 months, FCC moved its United States corporate headquarters into the facility and included space for an educational center for youth and community programs.

Davis said that recycling education is vital all over the city, but especially in District B, which is located near the Oates Road landfill. Illegal dumping is a pervasive problem district-wide, Davis said, but he has seen the benefit of educating youth about the importance of recycling. His own children have converted their grandmother into an avid recycler.

“We are plagued with illegal dumping in our area,” Davis said. “A lot of people don’t know — and some choose not to learn what they’re supposed to do — but we hope that the education center will get our kids to talk about how and where our trash is supposed to go. These are life lessons that our kids can teach our adults. We understand if we educate our children, we are educating the older generations too.”

Watch an HTV news segment about the facility dedication.

Watch an FCC video to learn more about how to make the most of your recycling bin.

Watch a VICE news video to learn more about how China’s environmental restrictions are affecting recycling programs across the country.