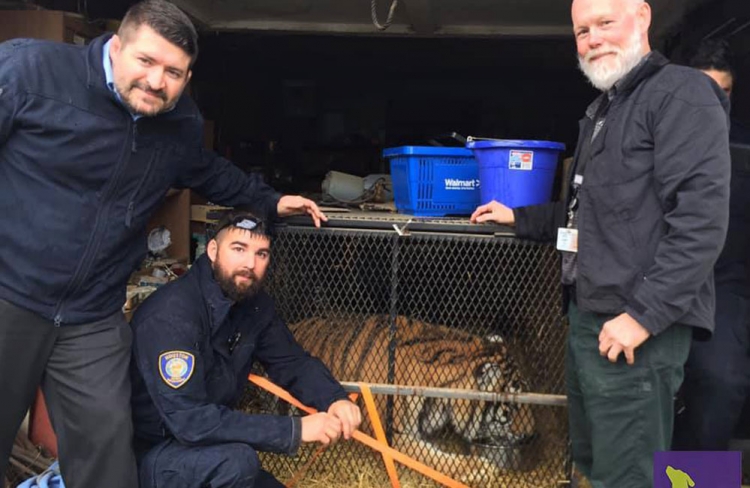 It was a call that Sonia Rico will never forget. In 13 years as a 311 telecommunicator, Rico never expected to receive an anonymous report of a full-grown tiger caged in an abandoned house on Monday, Feb. 11.

“That definitely tops my list of the craziest calls I’ve ever taken,” Rico said. “People report barking or abused dogs, bat bites, malnourished horses, alligators or cows on the loose. But a tiger? Never.”

The bizarre scenario captured the attention of national and international media.

As the world watched, the tiger may have been the headliner of the show, but the real stars were working behind the scenes, collaborating among multiple city departments and local agencies to ensure safety for the tiger and the public.

As the first point of contact, Rico set the wheels in motion to relay the information to BARC. BARC animal control and HPD officers confirmed the tiger’s location and obtained a warrant to remove the tiger from the house.

After the tiger was tranquilized, HPD and BARC worked together to troubleshoot towing, lifting, pulling, balancing and hoisting the cage into a horse trailer.

The male juvenile tiger, estimated to be about a year-and-a-half, weighs between 350-400-pounds. He was taken to BARC for safe keeping overnight, then transferred to the 1,400-acre Cleveland Amory Black Beauty Ranch in Northeast Texas the next morning.

After a mandatory quarantine, he will live among more than 800 resident animals, including two other tigers.

“I wish we had more people in our unit so we could help more animals and bring more animal thieves and abusers to justice,” Alderete said. “But the BARC animal control officers are truly a force multiplier for us.

"We rely on BARC to pick up the animals and get them out of dangerous situations. We then investigate whether a crime had been committed. It’s an underappreciated, physical and dangerous job, and they deserve recognition for what they do," Alderete said.

While this is an unusual case for BARC, Glaser said the team is accustomed to receiving wildlife and exotic animal calls.

“We receive a lot of erroneous reports. We will hear that there is a wolf, a black panther, a bobcat or mountain lion running around. People are often misinformed about what they see, and most reports of that nature aren’t credible,” Glaser said.

“But living in a city this big, you are going to run in to some unusual things. It’s something we are equipped to deal with. We know what to do if we find one, and we know who to call if we need some assistance,” Glaser said.

Experience with exotic pets and wildlife varies between team members, from Panzarella, a relative newbie who started with BARC in August, to Dunn, a longtime wildlife rehabilitator and a state-licensed alligator wrangler. Last year, Dunn helped removed a 7-foot alligator from a jogging trail near White Oak Bayou.

“I used to do inspections every six months on the tigers at a sanctuary in Montgomery County. We had one that was 750 pounds. I dealt with bears, servals (exotic cat), monkeys and jaguars, so this was not all that new for me.”

Panzarella said “tiger week” has been the high point of his career with BARC so far.

“It was certainly fun; I was excited the whole time,” Panzarella said. “I didn’t realize how quickly and how widely the story would spread. I sent a picture of me with the tiger to a friend in Germany, and he had already heard about it.”

BARC team members agreed that interest in the story was understandable, but all the media attention, speculation and rumors could be inconvenient.

“Trying to figure out how to get that big cage out of the little garage was all I could think about,” Walker said. “In a matter of minutes, cops and media and helicopters where everywhere. It felt like a circus. It’s not that we want to keep what we do a secret, but it works more efficiently without so many people around.”

The laws and ordinances about owning exotic pets and wild animals can be confusing to people who aren’t in the know, Glaser said.

It’s not illegal to own tigers in Texas if you have all the required permits from the federal government and the state, but you can’t keep them in the city. It is a violation of Chapter 6 of the City’s Code of Ordinances to keep a tiger within city limits unless the facility has been accredited by a nationally recognized zoological association.

The city allows the ownership of some wild animals depending on whether they are endangered, the size and the nature of the animal, Glaser said.

For example, you can have a python, but it has to be a subspecies of python that is less than 8 feet. You can have a monkey if the average weight of that type of monkeyis less than 20 pounds.

Glaser advises anyone considering exotic pet ownership to do their research and make a realistic assessment of the financial commitment these animals require.

“Exotic pets are a fantasy idea. It’s great in theory, but most people are not equipped to handle the animals or keep them in conditions that are suitable for them,” Glaser said. “The tiger is a great example of that.

Over the course of that tiger’s life, it would have cost about $2 million to keep it, between all the food you should have been feeding it, veterinary care and more.”

Dunn and Glaser visited the Cleveland Amory Black Beauty Ranch to check up on the tiger and were happy to report that he is doing well. The team said moments like seeing a video of the tiger walk on the grass for the first time make the job even more meaningful.

“It feels pretty good to take them out of a bad situation,” Dunn said of animal rescues. “And that’s what we do every day with all kinds of animals.”

Panzarella said negative perceptions about animal control officers are common, but he was pleasantly surprised to see how positive and grateful Houston residents are about the services BARC provides.

“I love this job, people are just happy to see us. They practically applaud and cheer that you’re coming through their neighborhood. I never expected that,” Panzarella said.

“Whenever I tell people about animal cruelty investigation, they say, ‘That must be such a hard job, it must be terrible,’ but I feel the opposite, because I’m helping the animal and I know I’m doing something good about it.”

Read a transcript of the anonymous call to 311.

Keep up with the tiger by following Cleveland Amory Black Beauty Ranch on Facebook.