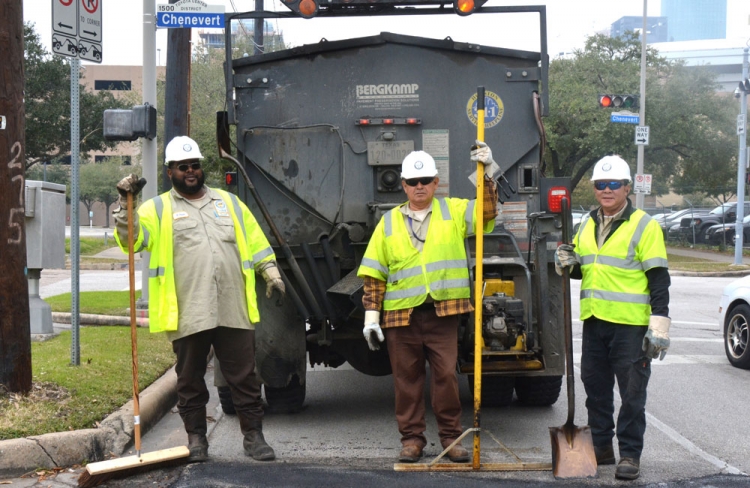 Robert Poole and his fellow Houston Public Works Transportation and Drainage crew members can easily fill 10 potholes a day. Weather, safety and road conditions permitting, the crew can complete the day’s assignments and get a jump on potholes reported just hours before.

But Poole, a 15-year Public Works veteran, remembers a time when every day felt like playing catch-up.

Before January 2016, Public Works road crews struggled to keep pace with the demand for pothole repairs. A growing backlog of service requests prompted newly elected Mayor Sylvester Turner to launch a 24-hour turnaround initiative where properly reported potholes would be repaired by the next business day.

Houstonians responded with an unprecedented surge of pothole reports in the first few months of 2016, but Public Works rose to the challenge. In the first two weeks of the initiative, Public Works filled more than 900 potholes reported to 311, according to a 2016 news release.

Potholes are a part of life in any big city, but Houston’s weather and soil structure make streets especially prone to damage. Maintaining more than 16,000 lane miles of city streets, Public Works crews can fill an average of 300 potholes a day, or about 50,000 a year. Over the last three years, pothole reports have slowed significantly, but HPW continues to fulfill the mayor’s promise of next business day service 98 percent of the time, department reports indicate.

Anthony Pate, Public Works Maintenance Section Chief, said Public Works had about 120 employees working on potholes when Mayor Turner kicked off the initiative. When Houstonians began lighting up the 311 phone lines with pothole reports, Pate said road crews were filling about 150 potholes a day. These days, they get about 30 to 40 service requests per day that are distributed to about 28 employees (seven crews) that repair potholes each day. The rest of the employees repair skin patches that are larger than 25 square feet.

In an interview with Public Works Magazine, Houston Public Works Chief Operating Officer Eric Dargan credited the program’s success to revamped processes, redefining the parameters of a pothole, new equipment, and technical solutions to improve the work order system such as software, tracking websites, reporting apps, and the use of tablets in the field.

City Savvy spent a day on the job with Poole and his crew to watch the pothole pros in action.

The day starts at 4:30 a.m. for Poole, who reports to the 5500 McCarty worksite by 6 a.m. He picks up his tablet, which shows the assigned potholes and route for the day. On Tuesdays the whole department congregates for safety tailgate meetings, but most days, Poole conducts safety inspections on his vehicle and equipment and heads out to the asphalt plant by 7 a.m.

Poole and his colleague, Hieu Nguyen, drive the Bergkamp Flameless Pothole Patcher truck, while Timothy Drones and Fidel Alfaro follow in a pickup truck. With 15 years on the job, Poole is still the newcomer. Drones, Alfaro and Nguyen all have more than 20 years of experience working on Houston road crews.

Fixing a standard pothole can take as little as 15 minutes, Poole said.

“We’ve all been doing this a long time, so making the patch is quick and easy,” Poole said. “What takes time is the driving. We can cover more than 60 or 70 miles a day. Start to finish, it takes longer to find the spot, create a safe work zone, fill out reports and close out the service request on the tablet than it does to actually fill the pothole.”

Safety is paramount, Poole said, because the work can be dangerous and many drivers are distracted and unpredictable. The first stop of the day was in Northeast Houston on Oates Road near U.S. Highway 90. The narrow street pockmarked by aging pothole patches over deteriorating pavement cuts through a primarily industrial area with heavy truck traffic. When the crew stopped to repair one of several potholes, they set safety cones and Drones flagged drivers to slow down, but counter-flow 18-wheelers sped past only inches away from where Nguyen completed the repair.

Since Public Works launched the next-business-day service model, Poole said his job hasn’t changed drastically, but he has noticed some positive differences.

“I don’t feel pressure to work faster, because I never had any trouble keeping up, but I think the process works smoother. I like using the tablets and having the ability to contact the citizen who reported the pothole for more specific details,” Poole said. “Our biggest frustrations are false alarms, lack of information, inaccurate locations, or driving out to damage that doesn’t fit the definition of a pothole. Our new system has helped to cut those false alarms down, but it would help us work more efficiently if citizens gave as much detail as possible when they call 311.”

Of the potholes reported to 311 from 2016 to now, 63 percent were larger than a defined pothole, according to department data. Missing or severely deteriorated pavement larger than a pothole requires a skin patch or panel replacement. Houston Public Works replaces about 900 concrete street panels per year.

“In some ways we are the scouts out in the field.” Poole said. “There are some roads that are too damaged and already have too many patches. We can fill the service request; we can fix the immediate hazard. But it’s just going to be a bumpy ride until more serious repairs can be done.”

Interacting with residents is all part of the job, Poole said. That afternoon, the crew repaired a large, deep pothole on Airline Drive as a resident, “Mr. Roosevelt,” leaned over his front fence to watch and cheer them on. Roosevelt, who preferred not to share his first name, said he has seen numerous motorists hit that pothole at high speeds, including his son who was severely injured when he lost control of his motorcycle on the spot.

“Most people we meet are happy to see us. They’re pleasantly surprised on those occasions when we fill a pothole the same day it was reported.” Poole said “From our perspective, the pothole initiative has been successful, and I’m proud to be part of it. It makes us feel good that we can help the citizens, but we’re helping ourselves, too, because we all drive these same streets.”

View a video of Poole and the crew courtesy of Houston Public Works. 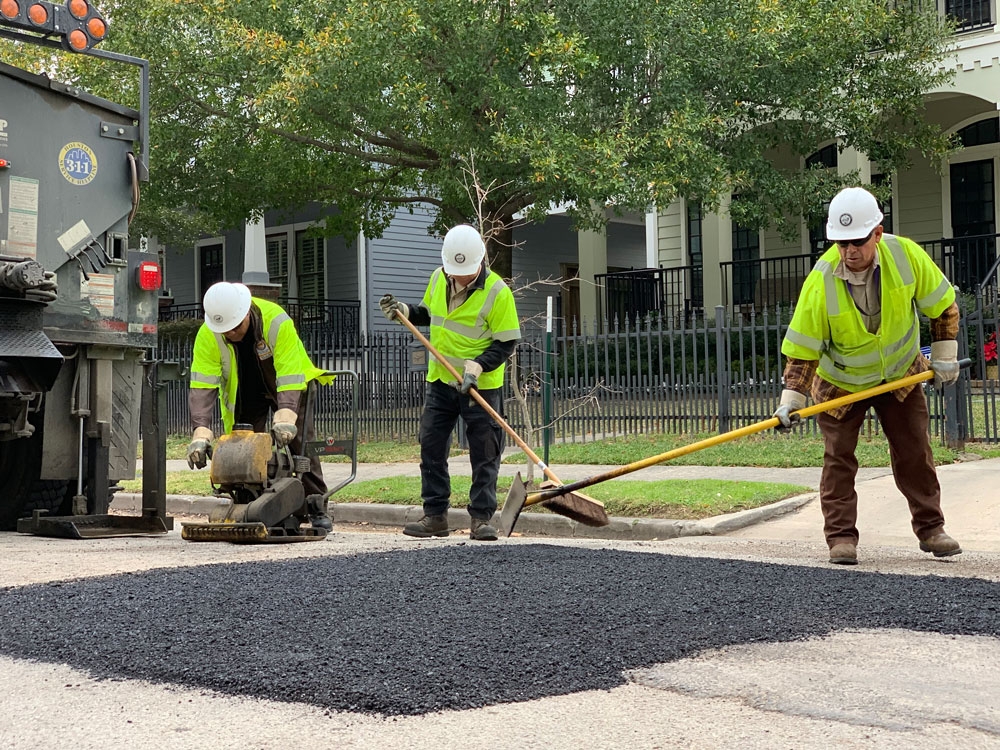 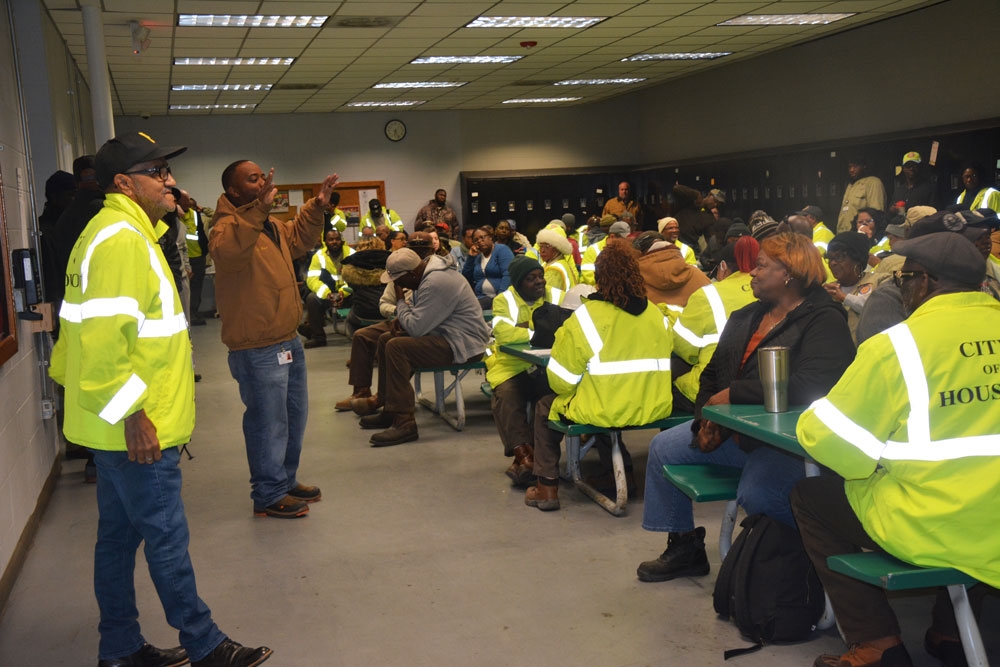 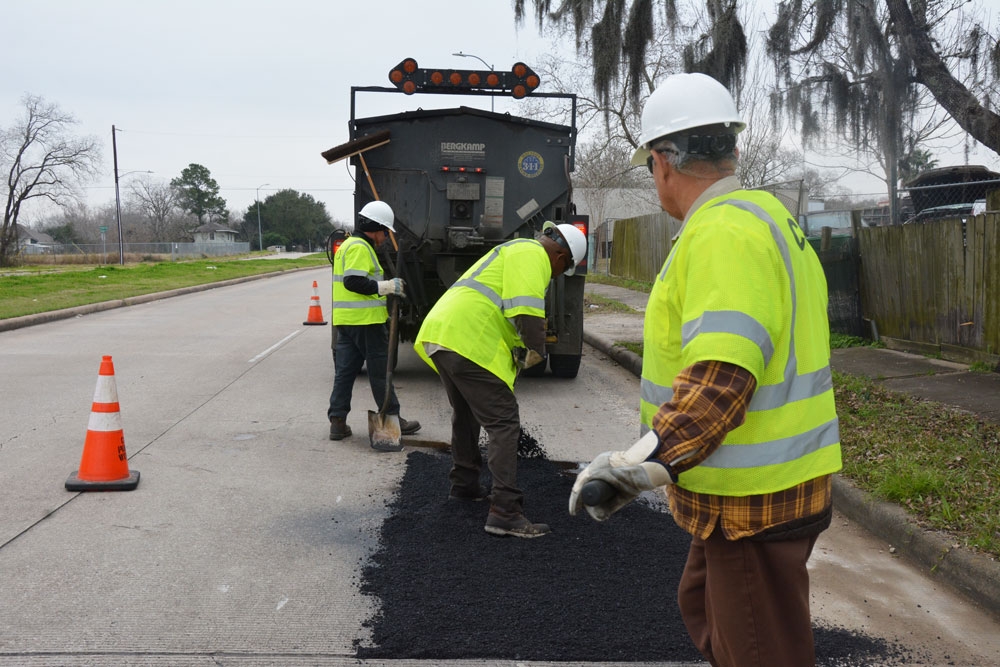 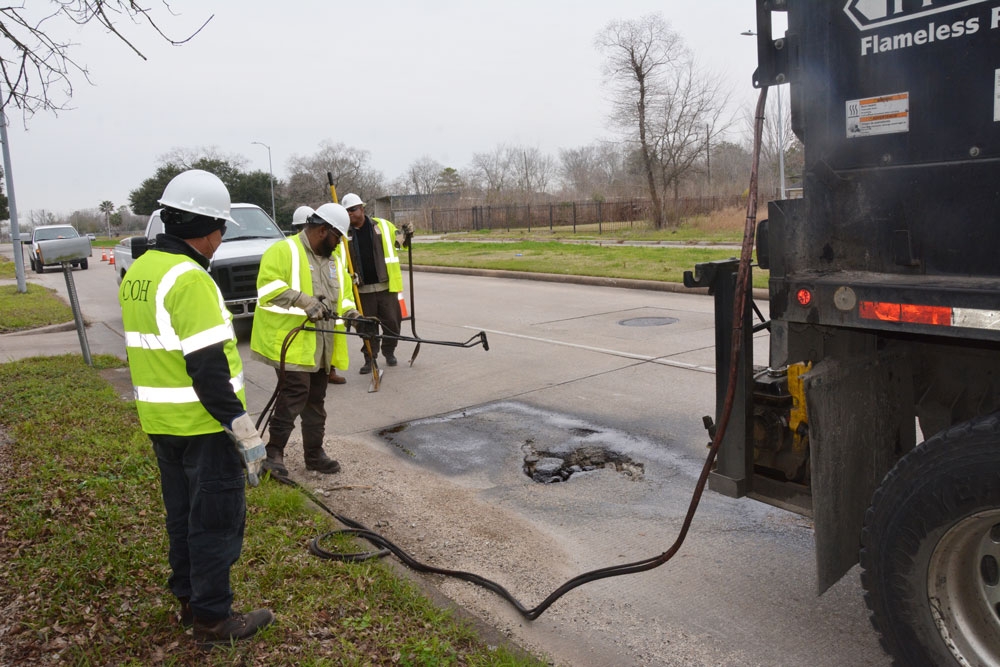 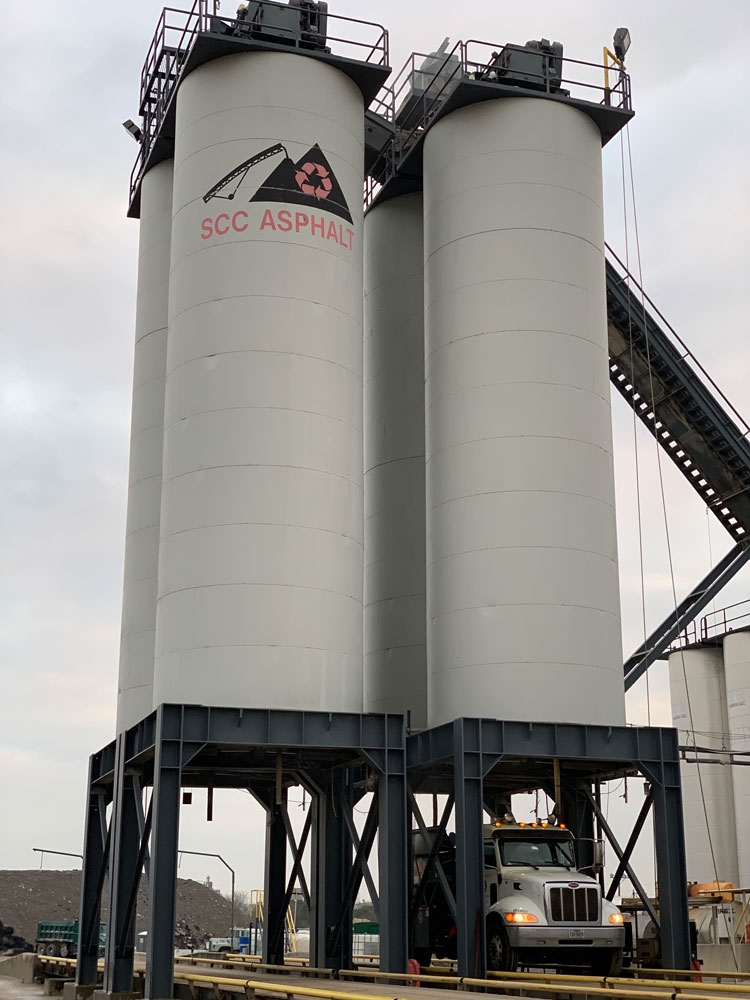 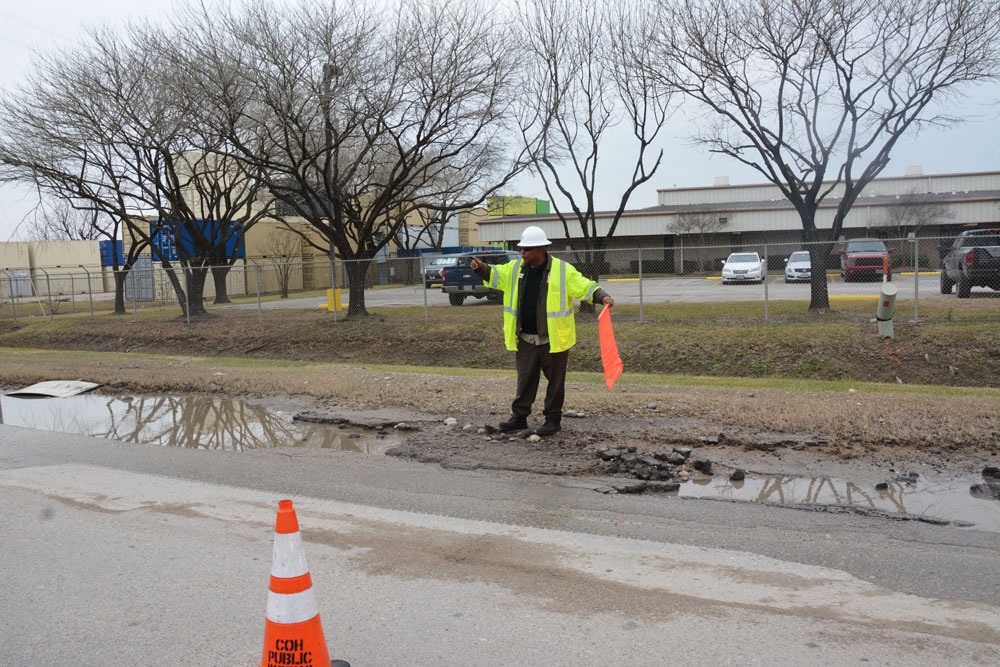 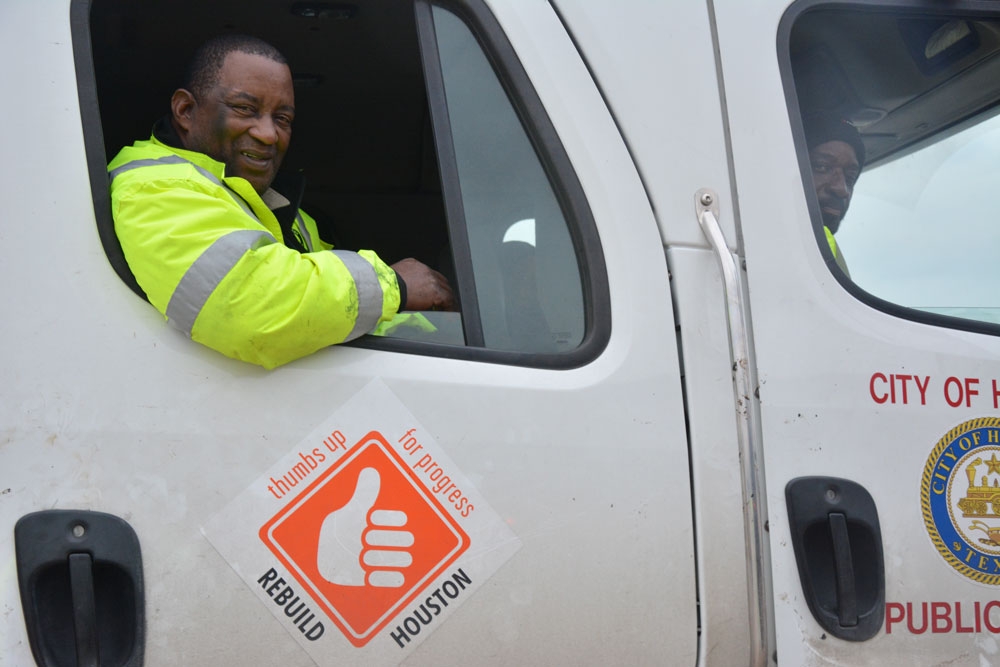 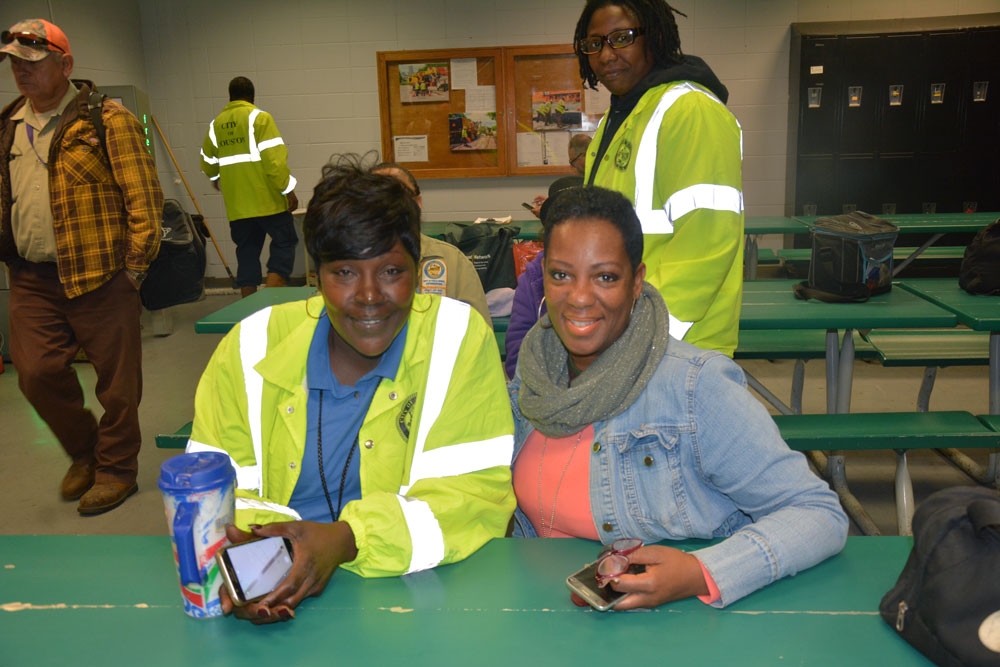 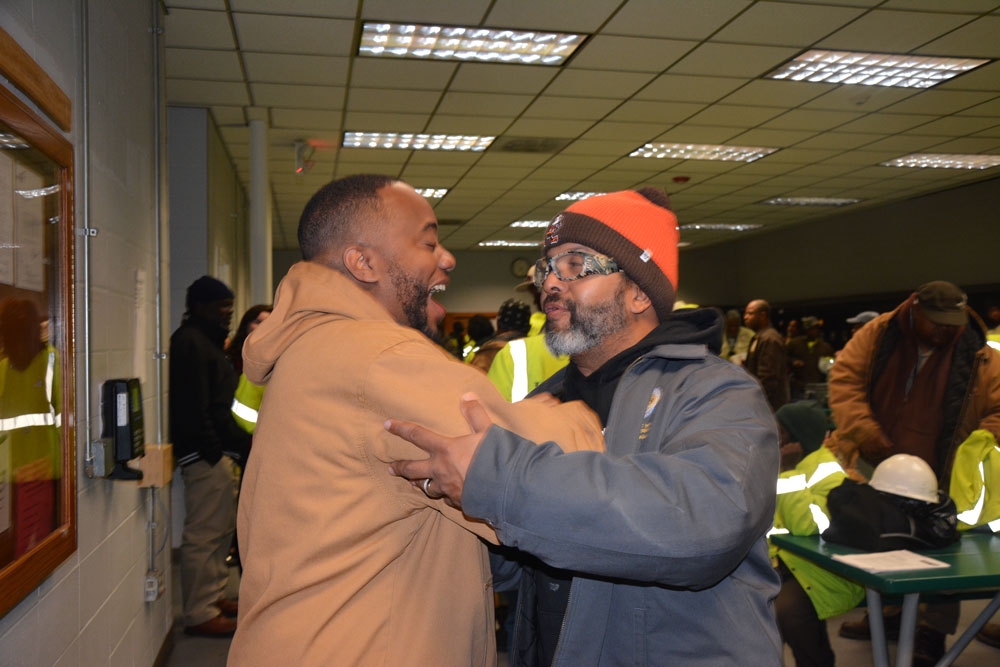 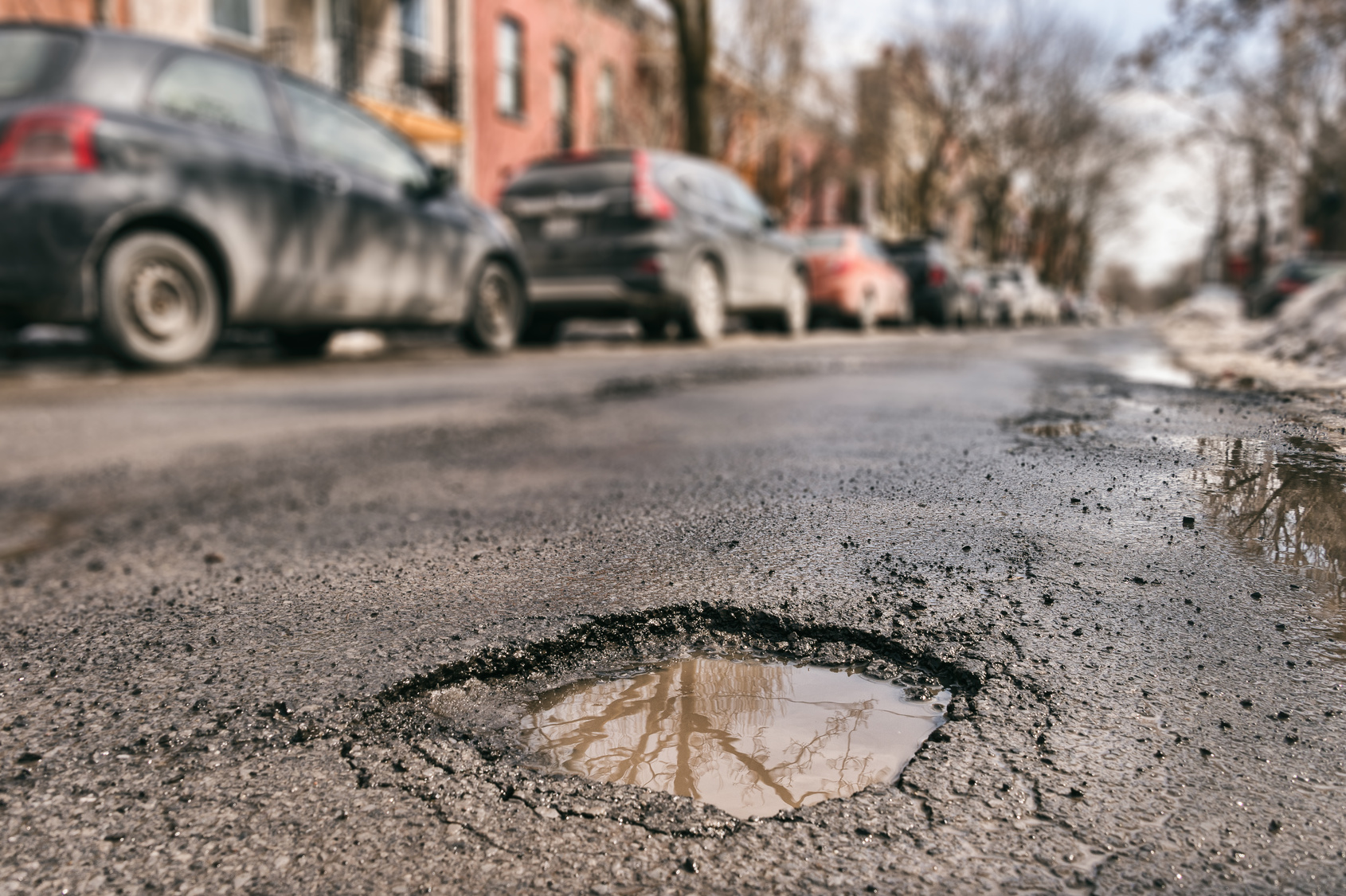 What is a pothole?

In the City of Houston, a pothole is considered any area of missing or severely deteriorated pavement that is up to about 5 feet by 5 feet. A pothole forms when water has seeped under the pavement and into the road base.  As vehicles run over these weakened areas, the pavement disappears and the hole gets larger.

Why are there so many potholes in Houston streets?

With about 16,000 lane miles of city streets, potholes will appear in many locations. Most cities expect to see more potholes in the winter and spring, following periods of cold temperatures and rain or snow. However, with our weather, Houstonians see them year-round.  Many streets, particularly in the older areas of the city inside the I-610 Loop, have an aging underlying structure, or sub-base, which reacts poorly to these conditions and increases the number of potholes that develop.

HPW fills potholes within one business day, but there are several reasons why repairs may be delayed: