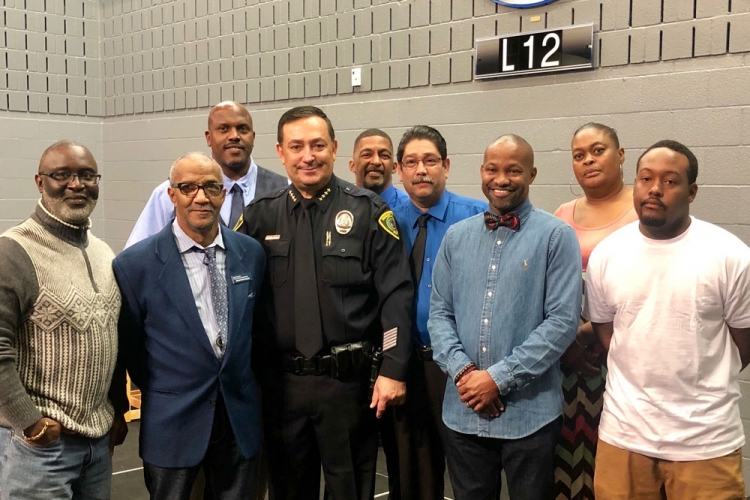 Storm drains are essential to drainage and flood control. Unfortunately, many people also see them as a convenient place to dispose of litter, debris and hazardous substances.

“You wouldn’t believe the kind of stuff we retrieve out of our pipes,” Davila said.

“We work in the large-diameter pipes, and if there is something suspicious in the storm sewers, we get called to investigate and track down the dumped object. Sometimes it’s a weapon, but earlier this year HPD called us out on a potentially harmful chemical spill that we tracked through the drainage system.”

HPD recognized those efforts by presenting a Chief of Police Unit Citation to Davila’s Public Works team and the agencies making up the task force, including the Harris County District Attorney’s Office, Texas Parks and Wildlife Department, and the Texas Commission on Environmental Quality.

According to the awards program, the HPD Major Offenders Division Environmental Investigations Unit received a whistle-blower tip regarding a packaging company that was illegally accepting hazardous waste in containers and dumping it in a concealed drain on the property.

EIU partnered with the joint task members and Houston Public Works to pursue the case.

The task force confirmed that hazardous waste was being dumped directly into a storm drain that led to Sims Bayou. The dumped waste flowed past numerous schools, residential neighborhoods and a city park before entering Sims Bayou, which flows into Galveston Bay and ultimately into the Gulf of Mexico.

Hundreds of containers of highly hazardous materials discovered on site posed a threat of exposure to the community and the environment. Many of the chemicals were highly flammable, potentially putting first responders at risk.

“A lot of people don’t realize that we’re out here doing this kind of work,” Davila said. “It’s all part of the job, but this incident could have got a lot worse if they hadn’t caught it in time. I’m very proud of my team, and it feels great to be recognized by HPD.”

Pennie Edwards said she also appreciated being part of the HPD awards ceremony, but she is even more grateful that the departments could work together to stop the contamination threat.

“My job feels more meaningful when we can help prevent dangerous situations,” Edwards said. “I’m glad everyone involved worked together to contain the spill before citizens got hurt.”