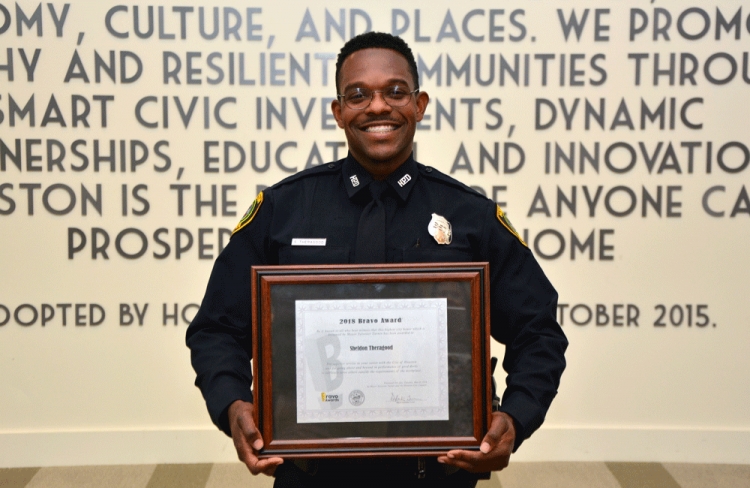 Two years after joining the Houston Police Department, Officer Sheldon Theragood responded to a call that would change his life.

On patrol in northeast Houston, Theragood arrived on the scene of a shooting in progress. A 17-year-old had been shot dead during an altercation with another teen. Ordered by his Sergeant to secure the body, Theragood walked over to the teen whose lifeless body lay on the ground. It was a somber moment for Theragood.

“I was very emotional looking at the body of this teenager who could have had all types of dreams, goals and things he wanted to do in the future,” said Theragood, who works in HPD’s mental health division. “But this one mistake, one fight, took his life away.”

The deadly shooting caused Theragood to reflect on his past experiences while working as a juvenile detention officer in the housing units of the Harris County Juvenile Justice Center.

“You have all these teens with all types of different crimes and charges,” Theragood said of the teens he encountered. “I was always asking them what was going on, why are you in here.”

Those experiences and the realization of a life lost prompted Theragood to act.

“I went home and prayed real hard, and asked God to use me to help kids and save lives,” he said. “To be that one person out of many to go out there and try to make a difference.”

Over the next year, Theragood began talking with teens and their parents hoping to get his message of hope out into the community. In 2013, he founded Theragood Deeds, a nonprofit organization whose mission is to provide mentorship and outreach to Houston youth.

Theragood’s selfless act to positively influence and inspire local youth earned him a 2018 Bravo award this past May.

One good deed at a time

Through his community outreach, Theragood teaches and inspires teens to make the right choices in life and to think twice before reacting to any kind of conflict.

“For me, it’s about trying to reduce the number of kids that are getting caught up in the system,” he said. “Be that father figure, that brother, that parent, whatever I can be to help these kids out.”

“A lot of my kids use to react, but now they think twice if it’s worth it,” said Theragood of the diverse group of kids he mentors and influences through his outreach.

Since 2012, Theragood has hosted a Real Talk with Youth and Backpack Giveaway event, which aims to encourage and inspire kids with positive stories from guest speakers such as entrepreneurs, officers, counselors, teachers, local rappers and many more.

“I started out doing it myself just going out and speaking,” Theragood said. “That second year, that’s when I got other speakers. We had food and a DJ.”

In its fifth year, the event has grown from 25 kids and their parents to nearly 100. Along with the annual Real Talk event, Thergood Deeds hosts an annual Beat the Heat for Homeless event, a Valentine’s Day card event that benefits local nursing homes, an Easter Egg Hunt and Brunch for Kids, a Christmas for Kids event that serves less fortunate families and a Veteran’s Day event that recognizes veterans at the Start of Hope Men’s Shelter.

Theragood believes getting kids involved in outreach can spark refection on their own lives.

“When you take these kids out and they see people that are less fortunate than themselves, they learn from that,” he said.

Theragood Deed’s upcoming Pre-Thanksgiving Community Outreach event will gather donations of clothing, socks, toothpaste, deodorant and soap. Kids will then make toiletry bags and distribute them to homeless people at Loaves and Fishes, a downtown soup kitchen that serves hot lunches throughout the week. This will be the event’s fifth year of donating bags.

He hopes the event challenges kids to do good deeds in the community. For Theragood, it’s all about making a connection with the kids and sparking a positive outlook on life.

“My hope is that they grasp everything we try and teach them as far as giving back, knowing how to love people, and being respectful to their parents,” he said. “Just making the right choices in life.”

To learn more about Theragood Deeds and its community outreach events, visit https://www.theragooddeeds.org/. You can also find them on Facebook @TheraGood Deeds.