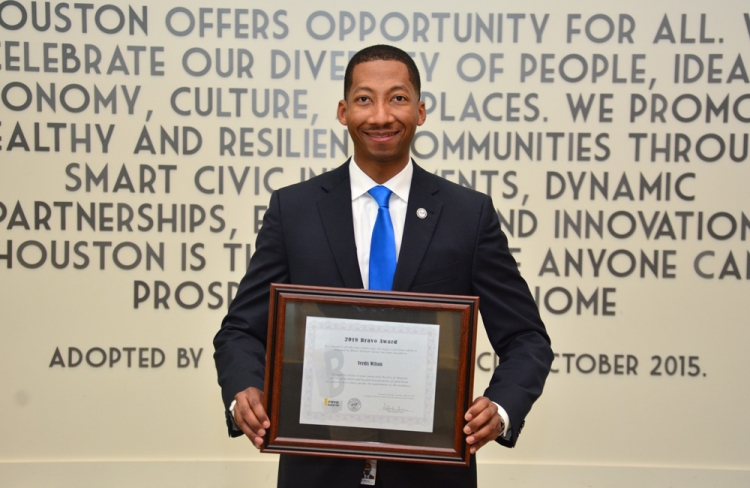 Bravo winner Verdis Wilson belives in value of service thanks to mother Gwendolyn McGowan, a recent retiree of the Houston Police Department. Wilson volunteers more than 40 hours a month thorugh his school alumni and church. Photo by David Smith

Constance William understands the struggle of paying for college. A full-time student who had always worked part-time over summers, Williams either depended on her own income, her parents, loans, or aid to cover tuition.

But in her last semester of college, she was awarded a $1,000 scholarship from the Jesse H. Jones School of Business Alumni Chapter.

The scholarship was one of several made possible thanks to alumni like Verdis Wilson, whose fundraising efforts help Texas Southern University business students overcome the challenges of paying for college.

“I was that student who said I just need $500 dollars to pay for books. I just need food money to put on my account. I need lunch to get thru the semester,” said Wilson, an audit supervisor for Houston Public Works. “Whatever the case may be, I believe in retuning.”

Heavily involved with his alumni chapter, Wilson spends nearly 40 hours a month volunteering his time to various alumni actives and events that seek to support the academic journey of TSU business students.

“That’s the only way we as people will move forward,” he said. “Each one giving back to the next generation.”

Wilson’s giving spirit earned him a 2018 Bravo award this past May. The award recognized his service to the city and volunteerism in the community.

“When it comes to his volunteer endeavors he is an “all-in” type of guy,” said Eric Dragan, chief operating officer for the city’s Public Works Department.

“Whether it’s in a professional setting with accounting organizations or his alumni association to rolling up his sleeves to help rebuild or repair a senior citizens’ home, Verdis is eager to help and not afraid to get dirty.”

It’s a life model Wilson continuously works toward achieving on a daily basis.

Along with fundraising, Wilson helps coordinate other giving efforts that benefit students. This past August through his alumni, Wilson contributed to the 1,000 Men in Suits initiative, donating suits to students in need.

For the past three years during alumni week, Wilson has shared his story with students and provided tips for living a successful academic life.

“I believe education is the only true equalizer,” said Wilson, who also served as vice president of membership for two years.

But education is not the only outlet of giving for Wilson.

As a child, Wilson grew up in the New Jerusalem Missionary Baptist Church, where he learned a lot about the value in giving back. Now, Wilson serves on the church finance committee as the treasurer, helping with reconciliation and other duties.

This past February, Wilson co-coordinated the church’s first “Soup-er-Bowl.” He and other members collected non-perishable food donations to give to the Magnificat Houses, a nonprofit organization that operates housing units and a soup kitchen for Houston’s homeless.

The project is ongoing and has donated some 400 pounds of food since February. To further spread the word of giving, Wilson became a Deacon this past year.

He reflects on the words of his grandmother to explain his passion for giving back.

Wilson’s mother, Gwendolyn McGowan, who retired this past this past June from the Houston Police Department after 32 years of service, inspired him to seek out a career in public service.

“Working for the city, I think it’s rewarding double fold,” Wilson said. “I feel like when I come to work, I’m giving back to the city that I live in. I feel like I’m making a difference and that I’m adding value.”

He believes everyone has something to offer.

“Giving back doesn’t always mean giving your money,” Wilson said. “If you can give two hours a month or on the weekend toward helping an elderly person or youth, or providing a service that’s just as valuable as giving.