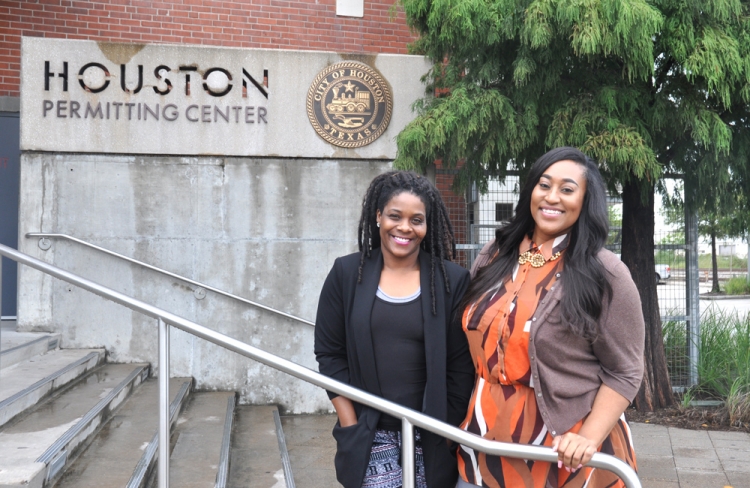 Chandra Hall is accustomed to encountering customers who are tired, frustrated and generally having a bad day. As a customer service representative for the Houston Permitting Center, Hall says she tries to have a positive attitude, even when people are not at their best.

As the city continues to recover from Hurricane Harvey, Hall said customer service requires a new level of compassion.

“Here we are a year later, and we still have so many people who come in to get permits to rebuild their homes,” Hall said. “We have had people start crying because they lost everything, and my colleagues and I would run in offering tissues and extra support.”

After Harvey, the city expanded its workforce by adding temporary jobs to responding to resident’s urgent recovery needs.

Over the last year, the City of Houston Human Resources Department and the Office of Business Opportunities jointly coordinated the Hurricane Harvey Disaster Relief Hiring Initiative, which currently employs about 90 people who either lost employment due to the hurricane or have been unemployed for more than 10 weeks.

The initiative is a partnership with Workforce Solutions — Gulf Coast Workforce Board, which is paying for the project with federal disaster relief funds. The work performed is directly related to hurricane cleanup, repair or humanitarian aid.

“This is a wonderful program that is a win-win-win for the city, the temporary employees, and the community,” said Velma Laws, Human Resources special projects manager.

“These individuals are performing much-needed work in the community, and several have actually been hired by the city as full-time employees.”

Hall and her HPC flood division colleague, Aisha Savoy, were contract employees, but they exhausted contract funds by working long hours after the storm. After Harvey, HPC employees worked from 7 a.m. to 7 p.m. on weekdays, plus more hours on the weekend.

The workload in the flood permitting division had tripled, but contract employees were facing possible layoffs. Both Hall and Savoy connected with a temporary employment agency, attended a Disaster Relief Hiring Initiative job fair and were able to apply for permanent employment.

“Working long hours under that uncertainty was an emotional roller coaster,” Savoy said. “I believe I am here to serve, and I was appreciative that the city went above and beyond to make sure we could keep doing our jobs.

It was reassuring and made me feel valued and needed. It felt like someone was looking out for me, so I can look out for other people who need it the most.”

Dianne Brown and Ricardo Solis started their city careers as temps for the Department of Neighborhoods.

Brown and Solis were both looking for work when Harvey hit, so Workforce Solutions encouraged them to attend a Hurricane Harvey Disaster Relief Hiring event. Both were hired as temporary workers to do “windshield assessments,” for the Department of Neighborhoods.

“We would drive down each street in flood-affected areas with the inspectors, looking through the windshield to give FEMA an estimate of damage, hence the name windshield assessments,” Brown said.

“Then the funding ran out, and I was laid off. When the city called me back three months later, I applied for a permanent position and came back readily. I saw what a great job our mayor was doing in a crisis. It made me want to get into the mix with what is going on with our city.”

Brown is now a full-time customer service representative working in day-to-day DON business, assigning cases to the inspectors who are going out looking at heavy trash, graffiti, junk motor vehicles, and other resident complaints.

Solis said Hurricane Harvey flooded his home and his car, so he was relieved when Workforce Solutions informed him about temporary job opportunities with the city. Even though he experienced flood-related damage in his own home, Solis said seeing the destruction across the city was sobering.

“The windshield assessments really opened your eyes,” Solis said. “Seeing the flooded properties in person and seeing how it affected the city, talking to the citizens – was really humbling and showed me how to show compassion on the job.”

“I was really excited to be a temp, but I was worried about the program ending,” he said. “This is a great job. I like knowing I work in a department that directly impacts the residents. When I tell people that I work for the Department of Neighborhoods, it makes me proud to tell them about the work we do for the community.”