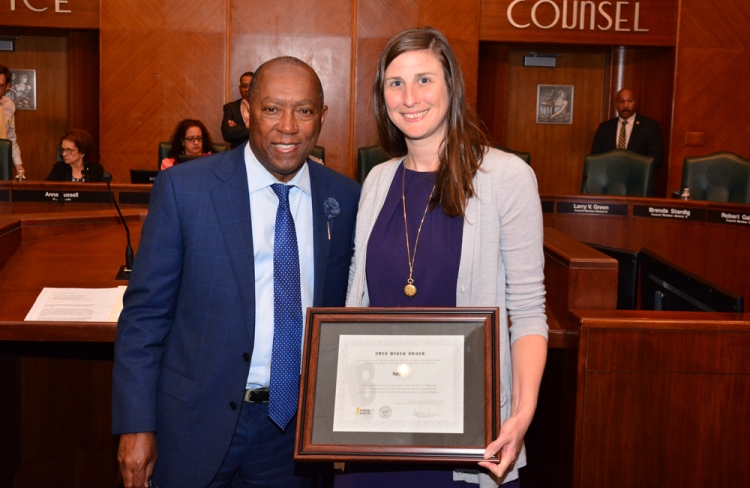 Bravo winner Mary Itz dedicates time out side of work to social causes that preserve city history and empower those in need. Photo by David Smith

Photos can tell a story without words. But for residents whose family photos were damaged during Hurricane Harvey, their stories could have been lost until volunteers like Mary Itz stepped up to help save them.

Since 2014, Itz has volunteered with Preservation Houston, a nonprofit organization that advocates for historic and cultural landscapes. The organization partnered with Operation Photo Rescue last December to restore family photos for residents whose homes were flooded during Harvey. Itz helped to sort, measure and copy photos for restoration.

“They were very appreciative,” said Itz, a principal planner for the city’s Housing and Community Development Department, of residents who came in to have their photos restored. “It was something very personal to them.”

Along with volunteering for community events that aim to preserve historic resources, Itz serves as a Good Brick Tour docent for the Preservation Houston’s annual historic homes tour. It’s one of several way Itz volunteers her time outside of work to help the community.

Last year, Itz spent nearly 400 hundred hours volunteering amongst local nonprofit organizations. Her passion for community and selfless volunteerism earned her a Bravo award this past May.

“Mary is committed to the volunteer work she is involved in” said Angela Simmons, division manager for HCD’s planning and grants management division. “She believes in service and volunteerism.”

After work and on some weekends, you can find Itz volunteering time for causes that seek to better the community. For the past six years, she has served in various volunteer roles for the Junior League of Houston, a nonprofit whose community initiatives support basic needs, women and children, healthcare, education and cultural enrichment.

Itz has served as archivist, treasurer and lead volunteer. This year, Itz is managing internal communications and serving as an at-large member on the board of directors, supporting the Junior League in making broader decisions.

“We decide on what events will happen, where the league will put volunteers, or what initiatives the League will undertake, or give money or volunteers too” Itz said.

In 2018, the League will contribute $2 million in volunteer time and provide financial support to more than 30 community programs in cultural enrichment, education and mentorship, family support, health and well-being, and neighborhood outreach.

“The most important thing is to build a better community in Houston,” Itz said.

For the past four years, Itz has volunteered with the Houston Livestock Show and Rodeo, serving on the Houston General Go Texan Committee and the Transportation Committee. Since 2016, Itz has also helped to review scholarships for the Greater Houston Community and served as a board member for Main Street Theatre.

“I get inspired with people that I meet and work with while volunteering,” Itz said.

Itz incorporates her passion for community into her role for the city. In the fall of 2017, Itz helped to transform HCD’s public hearings to more of an open house style.

“Before we just had a presentation with a public hearing. You had three minutes to come up and speak after the presentation,” Itz said. “Since then we’ve gotten a lot of staff members involved.”

“Now we have tables for people to converse with our program people,” Itz said of how she revised the hearing format. “We also have different activities and group discussions during the public hearing.”

“They learn about what we do, and we learn about people’s views and priorities,” she said. “It’s a better way to communicate with the community what we do.”

“Mary is an invaluable member of the planning division,” Simon said. “She and her team have absorbed an enormous amount of work due to the recent disasters and the disaster recovery funding coming into the city.”

“She works tirelessly on behalf of the division, the department and the city,” Simon said

Itz believes being involved in the community is her duty.

“I have a responsibility to create a better place to live for the community,” Itz said.