One of your longtime colleagues reached a significant career milestone recently, but you probably didn’t see a reminder on LinkedIn or grab a piece of congratulatory cake from the breakroom.

Like thousands of city employees, his face has graced the print and web pages of City Savvy. From traffic and hot weather to local sports and office pet peeves, Beckhead offers a monthly commentary on living and working in Houston. And in September, he marked his 15th anniversary in the City of Houston employee newsletter.

The character’s local insight comes from his creator, Paul Beckman, a Pearland native and former city employee. The Beckheads strip came to life in 2002 when Beckman worked as communications specialist in the Human Resources Communications division. He currently serves as the internal communications manager for Houston First Corporation, but he continues to draw the Beckheads strip for City Savvy every month.

Let’s just get this out of the way:

So, what’s with the name?

“A friend of mine, Mo Pair, used to call me Beckhead in high school for no particular reason,” Beckman said. “I did freelance work under Beckhead Comics before coming to the city including a couple projects for the Health Museum in Houston. Last I heard, my liver character is still alive in there. I also sold to magazines including one in the Saturday Evening Post.”

Beckheads wasn’t Beckman’s first cartoon, but it is his longest-running strip. A lifelong doodler, Beckman drew cartoons for his college newspaper at Texas State University. Living in Lithuania after a tour in the Peace Corps, Beckman drew editorial political cartoons for The Baltic Times, an English-language newspaper that covered Estonia, Latvia and Lithuania.

In September 2002, Beckman was inspired to draw the first Beckheads cartoon when the newly-formed Houston Texans beat the Dallas Cowboys in their first regular season game.

“When I drew the first one, I didn't imagine a series. I thought it was just a was a single-panel, one-time cartoon. When my manager at the time, Cyndy Sax, allowed me to do more, I decided to stick with those two characters for consistency,” Beckman said. “But over the years, their personalities became more solidified, and I got to know them. I know what types of things they would say based on the personalities that developed.”

A middle-aged couple, presumably married, and their dog, Lucy:  these are the main characters in the Beckheads comic strip. It’s a similar lineup as the current Beckman household, even down to the real-life Lucy, a black Labrador mix, who recently passed away at age 14.

In the comic strip, we don’t know their names, but readers get a view of their daily lives – a view to which many can relate. Beckman describes the main character as an every-man type of guy. Despite their similar names, Beckman said the characters are not autobiographical.

“He's not really based on me, but we do have a few things in common. We both don't like our baldness, we like Houston sports teams, love coffee and we whine about the heat and traffic,” Beckman said.

The passage of time doesn’t seem to change Beckhead, and he doesn’t show much personal or professional growth either, Beckman said.

“He’s like Bart Simpson – he has birthdays, but he never ages. He probably should age, because he tends to drink a lot of beer, and sometimes he complains about his back hurting.”

Would Beckhead be a good employee?

In his professional life, the character is relatable, but not someone employees should emulate, Beckman said. He hates meetings and business jargon; he’s motivated by sleep and days off, and he occasionally ignores his boss and colleagues until he drinks his first cup of coffee.

“He’s not particularly sophisticated and not particularly talented, but sometimes figures things out in surprising ways. He's not a loser by any means, but he also isn't a high achiever,” Beckman said.

Conversely, Beckhead’s wife is clearly portrayed as his better half. Still, Lucy is smarter than any human on the page, Beckman said. He even drew a tribute cartoon after Lucy died in July 2017.

“[Beckhead’s wife] is somewhat smarter than he is. She appreciates the world around her a bit more and she's more of a straight arrow. She is often surprised by her husband's unusual thought process and conclusions - for better or for worse,” Beckman said.

Bringing the same characters to life every month for 15 years requires patience and creativity, and Beckman said he draws inspiration from current events, his own experiences and annoyances. He prefers to avoid politics and controversy, and stick with themes of Houston weather, mosquitos, office life or traffic, he said. Beckman’s favorite cartoons of all time are “The Far Side,” “Peanuts,” “Bloom County” and more recently, “Bizarro.” His favorite political cartoonists are the late Doug Marlette, Mike Luckovich and Nick Anderson.

“I usually have two or three ideas rattling around my head, but sometimes inspiration doesn’t strike until about 2 a.m. the night before my deadline,” Beckman admitted. “I try to poke fun of things, but never mean to insult. After all, I grew up in the area. I've worked for the city and have great respect for Houston and the hard work city employees do. I am grateful for the city for all the years they let me cartoon. I am especially thankful to Cyndy Sax, who saw it as an asset and not just some needless scribbles.”

Eventually, Beckman will retire the character, but for now, Beckhead will continue to report to work in City Savvy.

“I've grown to like [the characters]. And just when I think they don't have anything more to say, they start talking again. In some ways though, I think about switching to something new. Maybe something less conventional — a bit blunter or weirder,” Beckman said.

See the 15th anniversary commemorative cartoon at right. You can see Beckheads archive online at citysavvy.org, in the monthly City Savvy email and the printed digest. Follow the Beckhead Comics blog as well as Facebook and Twitter.

Browse through the Best of Beckheads gallery of the Beckman's all-time favorite cartoons below: 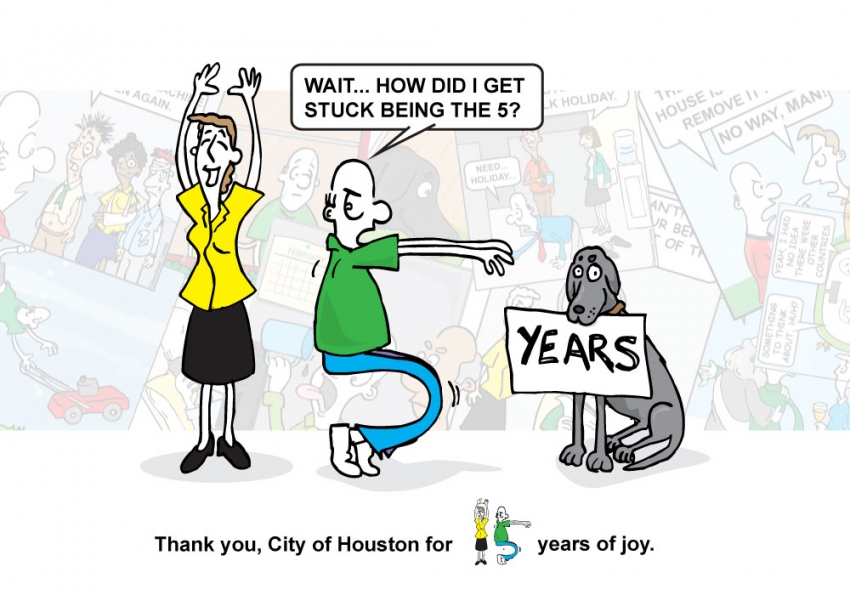