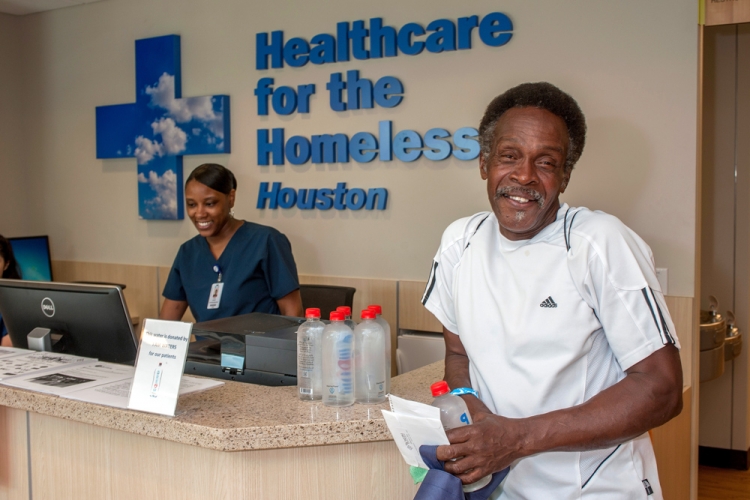 Photo courtesy of Healthcare for the Homeless Houston

Through the CMC, hope and dignity take root

Imagine being nearly invisible to society. You have no money for food, nowhere to shower, and nowhere to sleep, except a makeshift shelter crafted from scrap materials salvaged from the trash. For more than 6,000 people who find themselves without a home at night on the streets of Houston, it’s a stark reality they face time and again.

“We used to think that we could put Band-Aids on the issue of homelessness. Give a dollar or a meal,” said Eva Thibaudeau, director of programs for the Coalition for the Homeless. “What we’ve come to realize is that doesn’t end homelessness, it manages it.”

Serving as lead agency for The Way Home, the city’s adopted action plan to end homelessness, the Coalition provides leadership to more than 100 partner agencies through the advocacy coordination of strategies to prevent and end homelessness in the greater Houston area.

Since 2011, The Way Home and its partners have reduced homelessness by 57 percent, effectively ended veteran homelessness in 2015, and housed more than 3,000 chronically homeless individuals and 800 homeless families and individuals.

“Giving people back their privacy and a roof over their head, a bed, a shower and somewhere to eat is life transforming,” Thibaudeau said.

The Coalition, along with several hundred other nonprofit agencies, participate in the Combined Municipal Campaign, the City of Houston’s annual employee giving drive.

“We have so many CMC agencies that provide aid across our city,” said CMC Coordinator Jennifer Cobb. “Whether it’s helping our homeless community, giving kids a path to education, or helping families devastated by recent flooding, the CMC empowers city employees to create peace of mind for those in need through their generous donations.”

This year’s CMC theme, Give a Little Peace, shines a light on city employees’ efforts to spread a little peace by donating a percentage of their paycheck to a CMC agency, or making a one-time donation to a CMC agency.

“We are extremely grateful to everyone who gives to the work of the Coalition,” Thibaudeau said. “It supports this citywide drive to house people and get them off the streets and get them into the dignity of housing.”

“For many CMC agencies, donations make up the bulk of their funding,” Cobb said.

Healthcare for the Homeless has been a CMC agency for the past three years and understands the urgency of receiving community support to provide much needed services to Houston’s homeless community.

One local man shared his story about how HHH saved his life.

Injured and bound to a wheelchair, Joseph found himself living on the streets of Houston. He spent his days doing what he could to survive. But when Joseph heard about HHH, a nonprofit organization whose mission is to promote health, hope and dignity for Houston’s homeless through accessible and comprehensive care, he decided to reach out to them. Initially located in a downtown day shelter, HHH provided medical and dental care to Houston’s homeless community.

“My wounds were open,” said Joseph of the injuries that brought him to HHH. “If I didn’t have someone to care for them in between me going to the doctor, I would have died out there on the streets.

“I received medical and dental care and I got my eyeglasses,” he said. “It was life changing.”

“CMC donations are used for direct care,” said Carlie Brown, chief development officer for HHH. “The vast majority of our patients have no health insurance. Medicaid and Medicare accounts for less than 1 percent of our budget. So, we really rely on the community to help us fulfill our mission.”

Since opening its doors in 1999, HHH has grown from a small clinic with just two examination rooms with one dental chair, to operating three clinics that provide care specifically for the homeless, including dental, medical, and behavioral health services. A Way Home partner agency since 2012, HHH also provides street outreach services, a jail inreach program, and an extensive student teaching program. In 2016, HHH served more than 7,200 people and provided 44,500 patient visits.

“That’s one out of four individuals,” Brown said of people who access any kind of homeless service in Houston.

“I think the service we provide is not only good for our patients, but good for our community as a whole,” Brown said.

“It’s been the greatest experience that could’ve happened to me,” said Joseph, who began volunteering with HHH a year into treatment. In 2012, he became a certified community health worker and was hired by HHH to work full time.

“I found out that this was my passion — being able to help people work their way out of homelessness,” he said.

“We very much appreciate the support we get from the community,” Brown said of city employees who donate to HHH through the CMC. “It’s really essential to keeping our doors open.”

While many CMC agencies house and care for the homeless community, other agencies seek to rehabilitate those gripped by alcohol and drug addiction.

Healing the soul, transforming the man

Grieving from the loss of a loved one, Richard began to drink heavily. More than a year later, he found himself homeless and on the doorsteps of Open Door Mission, a faith-based nonprofit that focuses on the recovery and healing of men suffering from alcoholism or drug addiction.

“This place gives you the faith and the hope,” Richard said.

Founded in 1954, the Mission began as a soup kitchen for the homeless. Ten years later, it moved to its current donated space and established the Alan & Ann Craft DoorWay Drug/Alcohol Recovery Program, along with an onsite education center.

“Residents spend seven months in the program,” said Tommy Thompson, president of the Mission. “They get skills training, understanding of their illness their disease, and seven months of sobriety, which is very important.”

A CMC agency for the past four years, the Mission relies on generous donations to support programs and service for residents like Richard, who is grateful for the opportunity to change his life.

Along with walk-ins, the Mission works with the city’s Sobering Center and the Harris County Drug Court to get men enrolled in their residential recovery program. The program includes a Christ-centered 12 step program, mentorship, weekly academic studies that focus on computer and job readiness.

“We are really looking for a man that wants to change the way he has been living,” said Thompson, who has been sober for 30 years.

The Mission has more than 90 beds available, including 28 beds dedicated to convalescent care of men recently released from the hospital. In 2016, the mission served 648 men, with 74 of those men going on to graduate from the DoorWay Program.

“When they graduate they are then given an opportunity to stay here,” Thompson said of graduates who stay at the Jack Mayfield House, a 16-bed transitional living apartment building located across the street from the Mission.

Upon graduation, residents are offered vocational training through Houston Community College, the University of Houston Conrad N. Hilton College of Hotel and Restaurant Management, the Houston Carpet School, and Ser-Jobs for Progress.

After graduating in September, Richard is ready to move forward and build on his service industry background.

“I want to try and go back to the Marriot or the Hilton,” he said. “I want to have my own place and be productive and go to church.

“It would be a very serious loss to the city if the Mission wasn’t here,” Thompson said “This is a recognized facility as the place for men to come, and it’s a free program.”

A Way Home partner agency, the Mission works with the Coalition to find permanent supportive housing for graduates who are ready to take that step.

“Ultimately, the CMC is a way for city employees support to agencies that are the backbone to Houston’s social causes,” Cobb said. “It’s all about giving back and helping those who are most in need.”