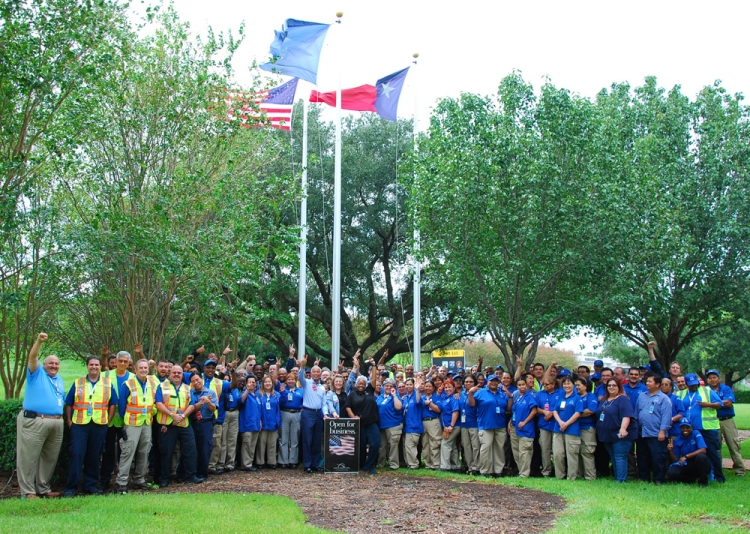 September brought the nation’s strongest weather event on record to Texas, affecting thousands of people in Houston.  In a four-day period, many areas received more than 50 inches of rain as the system meandered over eastern Texas and adjacent waters, causing catastrophic flooding. The Houston Airport System went into emergency mode to ensure the safety and security of passengers and employees as well as maintain the airport’s infrastructure.

The airport’s emergency operations center (EOC) was activated and staffed with essential Tier 1 employees who worked around the clock. All flights were cancelled in and out of the airport and the roadways surrounding the airports were also closed due to water accumulation and ponding.

Hobby Airport was located in a portion of the hurricane’s path that suffered some of the heaviest rains. Flights were cancelled and roads flooded which left some passengers stranded at the airport. In addition, employees were not able to leave after their normal shifts.

With a prediction of continued rain and no end in sight, the team at Hobby pulled together and strangers became family. Maintenance staff worked quickly to repair leaks from the heavy rain accumulation. The airport operations team maintained the integrity of the airfield and assisted airlines with their needs. Custodial staff had the hard task of keeping the airport and restrooms clean to ensure passengers were comfortable despite the added stress of not knowing how long they would have to stay at the airport.

Sarah Freddie, the administration manager at Hobby was charged with coordinating and keeping track of the total number of people who were at the airport and ensured resources like food, water and cots were available to passengers and employees.

When the roads near the airport became impassable, eliminating access to off-site food options, she turned to Robert Riedle, Director of Operations for 4 Families, who operates all of the restaurants at Hobby Airport.  Riedle stepped into action, supplying food for the passengers and employees from some of his restaurants including the Pappas brand: Pappasitos, Pappadeaux and Pappas Bar-B-Q. Freddie even got into the kitchen to assist with food preparation.

“We were a team. I have met so many team members who I did not know before, and we truly bonded over this unfortunate time for our city,” said Freddie. “Without us working together, we would not have gotten through it.”

As Hurricane Harvey began to swamp the Houston area, Bush Airport ceased all commercial aircraft operations, but remained open for military and humanitarian flights. Bush Airport officials estimate that almost 10.2 billion gallons poured down on the facility during the hurricane event—equal to about 33 Houston Astrodomes.

While the airport was closed to commercial operations, Bush Airport quickly focused on the key role an airport plays during a natural disaster: a lifeline for the region. Bush essentially became a civil-military operations center, or temporary home to the air assets for various federal agencies including the U.S Air Force, Air National Guard, U.S. Coast Guard, Department of Homeland Security, and FEMA.

In addition, medical supplies were routed through the airport and aerial evacuation operations landed at Bush for refueling, crew rest, and, in several circumstances; to transport injured civilians to relief hospitals in bordering states.

“Once we pivoted our focus to the recovery phase of the crisis, we worked with our tenants and federal law enforcement agencies to quickly address the complex logistics required to ensure that federal agencies would have the resources necessary to perform search and rescue missions,” said Ted Kitchens, general manager of George Bush Intercontinental Airport. “This was an unprecedented disaster for our region and nation, and I believe our past training prepared us to accommodate this very important aspect of the emergency operation.  I am very proud of the professionalism, compassion, humility, and creativity the IAH staff used to solve the numerous operational challenges faced during the storm and am thankful for all the support we received from our fellow business units across the entire airport system.”

The U.S. Coast Guard increased daily helicopter operations from their normal six to over 40 to perform necessary rescue missions. They also brought many of their C-130 Hercules aircraft to provide that were full of aid and support resources that assisted the region. Once military operations began, evacuees were brought to Ellington airport where they were then transported to the George R. Brown Convention Center.

Ellington staff assisted military operations by removing all storm debris from the roadways and taxiways. They reported the status of open and closed roadways and flooded runways to the rescue teams and ensured fuel trucks at the FOB could access military aircraft.

When President Donald Trump came to Houston to survey the damage Hurricane Harvey caused in the area, Ellington staff worked with the U.S. Secret Service to provide security sweeps.

“While commercial passenger flights halted in Houston, Ellington airport played a critical role to support military flight operations,” said Arturo Machuca, General Manager of Ellington Airport. “The team here worked around the clock, and I am proud of their response to make certain that military operations had no interruption.”