Even Harvey can’t make BARC stray from duty to animals

Written by
Rate this item
(3 votes) 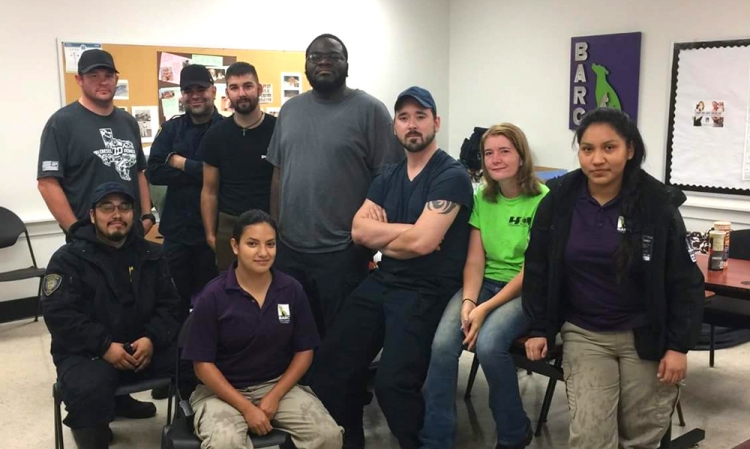 Chris Dunn packed extra food and an overnight bag before reporting to work on Aug. 25. Rain was coming down hard and he knew it might be a long night – or even longer.

During Hurricane Harvey, Dunn and a team of seven to 10 BARC employees were charged with caring for Houston’s four-legged residents — animals already housed at the shelter and pets displaced by the storm.

“It was busy nonstop,” said Dunn, a BARC animal control supervisor. “We were all pitching in to keep the animals in the shelter fed, watered and clean in addition to answering calls for rescues, transferring supplies to the George R. Brown Convention Center and NRG Stadium.”

As the water started to pool outside the BARC administration building and adoption center on Carr Street in the Near Northside area, Dunn said BARC vehicles could still navigate the immediate area. But like the rest of Houston, BARC employees had to make the call: it was time to hunker down.

“Carr Street flooded, Jensen flooded, and eventually it was harder to get in and out of the area. It was safer to stay put and stay off the roads,” Dunn said. “Saturday night was a close call, we were worried about some employees making it back to the shelter.”

Dunn said the shelter animals didn’t seem to be bothered by the storm. Thick concrete walls, indoor kennels, power and running water, steady food and attention kept the animals happy. The animals were well provisioned, but the employees had to make do with what was available.

“It wasn’t the most comfortable experience; everybody was tired and we didn’t get much sleep, but that was happening everywhere in Houston,” Dunn said. “A few people brought air mattresses, and everyone had snacks. We shared what we could.”

There was an open restaurant within walking distance. When the roads cleared more, volunteers delivered food and toiletries.

“Start to finish, I ended up spending five nights in the shelter,” Dunn said. “Most of the employees were worried about their own homes and being separated from their families, but everyone had a good attitude.”

Rebecca Herrera, a BARC animal care technician, spent the first two days after the storm at BARC, but then went to help displaced Houstonians and their pets the convention center.

“There were so many people who lost everything. It was so sad,” Herrera said. “I was so glad that we could care for the animals while their owners dealt with their immediate needs. It was very rewarding to be able to ease their worries and offer a small sense of comfort that their animals were safe.”