Hurricane drill: City has a dry run for wet weather 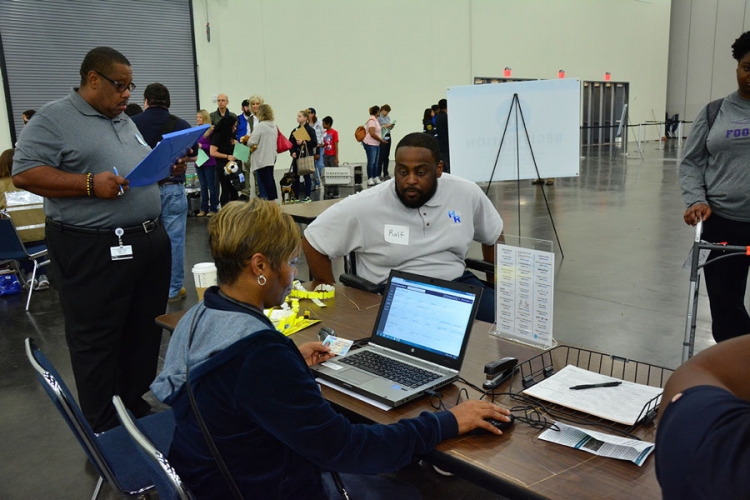 The middle of a natural disaster is not exactly the best time to learn on the fly.

That’s why city officials brewed up their own crisis, Hurricane Charlie, and practiced evacuating residents as the fictitious storm took aim at the Southeast Texas coastline on June 7.

Then, just as Charlie passed, it was time to practice coping with displaced residents who needed temporary shelter.

And things did not go 100-percent smoothly. They weren’t supposed to; they were supposed to simulate real-life crises during a real disaster as much as possible.

Volunteers posing as a residents lined up in the George R. Brown Convention Center. Some had children, some had pets, some had disabilities. All were nervous and anxiously seeking a seat on one of the buses idling outside, waiting to transport them to a safe place.

Organizers of the drill built in other obstacles: language barriers, emotional basket cases, others who did not want to go to the destination they were assigned. 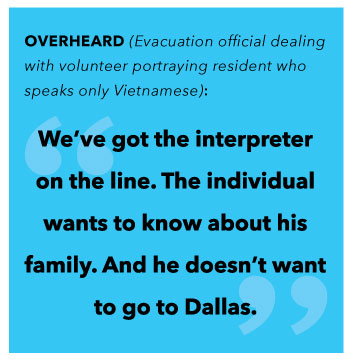 The drill was primarily intended to give Houston Police Department and Health Department employees practice for what they would do in the event of a real hurricane. Registration and crisis management were the order of the day.

Tina Rose, Mayor’s Office staff analyst and planner for the event, said it was a full-scale exercise featuring an evacuation hub and interim shelter. Everyone who participated joined the exercise with tremendous enthusiasm and benefited from it, she said.

“HPD and the Health Department were awesome,” Rose said. “HPD was the lead in the morning during the evacuation. HHD staff were primarily in charge of the registration process. Then, during the shelter phase, HHD took the lead in registering anyone who needed a place to stay, and HPD was in charge of security.”

Human Resources Department safety observers were present throughout the event and recorded observations for how procedures could be improved or made safer.

Rose also had plenty of praise for the volunteers who turned out to portray residents who wanted to evacuate. Many were city employees, but Rose said several community and church groups also provided volunteers.

“We cast a wide net for role players,” Rose said. “What we got was a hodgepodge of community people. We invited employees citywide and also reached out to community groups.”

No one expected things to go according to a script. Disaster response never does. And even exercises like Hurricane Charlie require some improvisation. For example, some HPD officers who may have participated were instead posted on assignment for a visit the same day by Vice President Mike Pence.

“We will always have problems we have to deal with,” Rose said. “Communication is the key. If the communication is missing, that’s when people start getting upset.”

Rose said she and others who participated in the exercise will develop a report that will be made public. The event was a success through: it confirmed the value of many evacuation and shelter processes and should help authorities continue to improve.

“Overall, we got a lot of positive feedback,” Rose said. “They get to test stuff. The process pushes them to consider things they may not have thought of before.”

Where did the name come from?

To set the stage for recent hurricane exercises and lend a little authenticity to the evacuation simulation, officials conjured up a fictitious storm threatening the coastal region — Hurricane Charlie.

So where did the name come from?

Well, it was a respectful nod to one of the most prominent names in emergency services in Southeast Texas: the late Charlie Kelly Sr.

This is from his obituary in the Galveston County Daily News: “Charlie was instrumental in coordinating and assisting with the evacuation of Galveston Island residents during Hurricane Ike in 2008.

Many lives were saved during this time because of Charlie’s leadership and dedication to the citizens of Galveston. He was a Certified Texas Emergency Manager (TEM).

In 2014, Charlie received the “Unsung Hero Award” from DRC Emergency Services for his efforts making Galveston a resilient community. In 2015 received the Lou Harrel “Emergency Manager of the Year” Award from the Emergency Management Association of Texas for excellence in emergency management.”