Houston rolling toward a future with more bikes

When it comes to transportation, Houston is known for cars, not bikes. 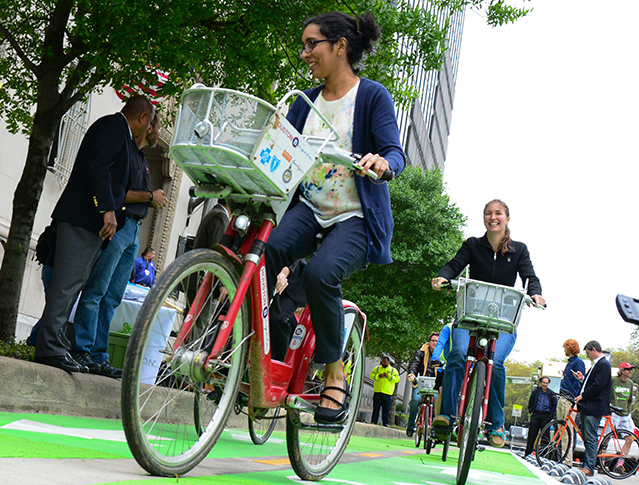 A group of City of Houston employees across multiple departments is working to change not only people’s perception that Houston is not bike friendly, but also ensure that it becomes a place where bike transportation is truly viable.

Their vision of what Houston can be for bike travel reaches out over the next decade and is criss-crossed with a great series of interconnected lanes, paths, trails and programs.

Not that they are going to wait 10 years; they are busy now and getting results today.

New bike lanes and paths have begun to connect the city for cyclists like never before. Houston’s bike-sharing program is more successful than organizers anticipated. And commuters and cyclists enthusiastically hit the streets for bike-related events, such as National Bike Month in May. (See the sidebar at right for information on that and Bike to Work Day for city employees the morning of May 19.)

Further, Houston City Council recently approved a landmark bike plan that could pave the way to a safer, more accessible, bike-friendly city. Houston will no doubt be wedded to vehicular traffic for the foreseeable future, but it might surprise many by also becoming something of a cycling exemplar.

The bike plan passed March 22 identifies objectives in the near-term that can move the city in the direction of a comprehensive biking system. It also outlines strategies for how Houston can join the elite company of urban areas that are the gold standard for cycling cities, as rated by the League of American Bicyclists in its Bicycle Friendly America ratings.

At present, Austin is the only Texas city or town with a gold rating. Houston is one of nine others in the state to achieve a bronze rating.

“Our goal is to be at gold level in 10 years,” said Anita Hollmann, ped-bike coordinator and project manager with the Department of Public Works and Engineering’s Traffic Operations Division. “The bike plan has a long-term build out of the network. And we have a 10-year vision to have 85 percent of the city connected.”

The Houston Bike Plan is a guide that describes a vision for how Houston can become a safer, more accessible, bike-friendly city. The plan’s contents, suggestions and maps are recommendations for future biking corridors and facilities. It is not a rigid regulatory document with mandates.

Nor does the plan have any real cost to the city budget. Instead, it is a planning-level document. Though it does contain some planning-level cost estimates for projects involved in achieving a citywide high-comfort bicycle network, no funds are committed. Decisions on design and location of bicycle facilities will come only after further analysis and public engagement.

Amar Mohite, a division manager for PW&E who has been involved in development of the bike plan, said getting the public to buy in to the vision is essential.

“We want to get the community involved from the beginning. We want to work on educational initiatives. Our short-term goal is to get more involvement in the next five years,” he said.

“You have to keep the larger vision in mind,” Hollman said. “Streets are not just for cars; they are for everyone.”

Action and improvements to Houston’s biking scene have been occurring already, in advance of City Council’s approval of the comprehensive bike plan.

For a couple years now, cyclists have been able to zip through downtown safely along a new bike lane on Lamar Street. The lane is along one side, formerly lined off for parking. It is painted bight green, is protected from vehicular traffic by small barriers, and establishes a 10-block direct path linking Sam Houston Park on one side of downtown and Discovery Green on the other. It also moved the city closer to truly connecting the Columbia Tap bike trail to trails along Buffalo Bayou.

In addition to expanding bike lanes, residents, commuters and visitors have embraced the Houston Bike Share program, or Houston Bcycle. The non-profit bike share program has stations where bikes are available to rent. Riders can learn more online about where to find and rent bikes, other stations where they can drop the bikes off, and much more about the Bcycle program at houston.bcycle.com, or by following @houstonbcycle on Facebook, Instagram and Twitter.

Bcycle’s success means expansion plans are in the works. Bcycle’s expansion is funded by a Federal Highway Administration grant, sponsored by the City’s Planning and Development Department. Houston Bike Share is responsible for $880,000 in local match funding.

As much progress as the city has made to become more bike friendly, there are miles to go before the final destination. But the determined community of cyclists and commuters and the city personnel implementing the new bike plan are going for gold.

Watch this HTV video about Bike to Work Day on Friday, May 19.

Learn more details about the Houston Bike Plan with this detailed video overview.