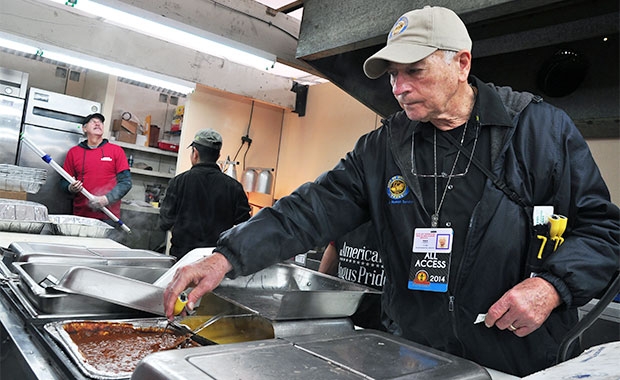 From restaurant kitchens to rodeo concessions, Joseph Raia inspects food to make sure it’s safe for you to eat.

The aroma was hard to ignore. The mingling scents of barbecue, burritos, cotton candy and etouffee lured customers to long rows of temporary food eateries inside the entrance gate at the Houston Livestock Show and Rodeo.

More than 2 million people visited the rodeo this year. Those who came hungry were not shortchanged on food choices.

Gooey, fried, frozen, baked or on a stick — Joseph Raia doesn’t care what kind of food people put in their mouths. As a city sanitarian, also known as a health inspector, he just makes sure it’s safe when it goes in.

Raia’s usual inspection beat is an area near Hobby Airport. But when the rodeo is in town, he and the other inspectors from the Health and Human Services Department take turns sifting through those kitchens to ensure all food is safe. With Houston's outdoor festival season revving up, the rodeo won't be the last temporary food set up they look in on.

“We get to visit all the different restaurants, schools, anybody that has a food permit,” Raia said. “We go and inspect to see if they are abiding by the health code.”

In early afternoon, Raia arrives at the rodeo with three thermometers, a pocketful of alcohol wipes and a list of nearly 20 places to inspect.

“It’s an interesting job,” Raia said. “I get to see a lot of people during the day, go to different locations. It’s an important job, really. Very important.”

During his seven years on the job while inspecting all over town, he has run across some gruesome sights.

“I don’t like to think about it,” Raia said. “There are some roaches and rodent problems. I'm not saying they are widespread, but they are kind of disgusting. And that seems to get the attention of people real quick.”

“You wouldn’t necessarily know the temperatures as a customer,” Raia said. “It isn’t visible or obvious like a pest problem.”

In general, Raia said the food establishments at the rodeo do a good job minimizing violations.

His first stop was Pappasitos. After asking to come in and checking the city permit, Raia stepped into the kitchen. Like a choreographed dance, he easily glided back and forth through clusters of busy workers and cooks as he ran his tests.

The first thing he checked was the sink area. He tested the sanitizing solution concentration and made sure running hot water was at least 110 degrees.

Next he puts a thermometer in the refrigerator full of queso and chopped chicken destined for quesadillas. The temperature must be 41 degrees or lower to be out of the danger zone. Satisfied, Raia slips the thermometer through an alcohol wipe and moves on.

Raia is a quick draw with thermometers as they find their way into meat, refrigerators, freezers, hot holding units and condiment stands. The only reading he didn't like was the temperature of the hot hold units, where prepared hot food is kept warm just before service.

“So you’ll just need to crank it up a little bit,” Raia tells the manager. “In here it has to be 135 degrees.”

Raia said he never leaves until he's satisfied the temperatures are all where they should be. When he runs into a problem that can be fixed on the spot, he waits until it is corrected. And somehow Raia manages to walk the fine line between meticulously stubborn and confrontational.

“Most of the time, I try to be more an instructor about what you’re supposed to do, kind of assuming they want to do the right thing,” Raia said.

Despite the dizzying number of places, Raia’s focus stayed sharp.

“You get kind of in a rhythm,” Raia said. “Once you get going it just seems to go a little faster. That just depends on what you run into.”

On this day, Raia didn't run into major violations.  Just some minor ones that were corrected immediately. All that remained was going back to the office and writing up a report.

The next day, he’d return to his beat near Hobby Airport. But Raia doesn’t mind. Every day, whether at the rodeo or on his beat, the job keeps him interested.

“I like the variety of things you run into, and the feeling like the job has purpose. Like the work we’re doing is important,” Raia said.

More in this category: « Planner leader high on a productivity rush Solid Waste Management driver talks trash »
back to top